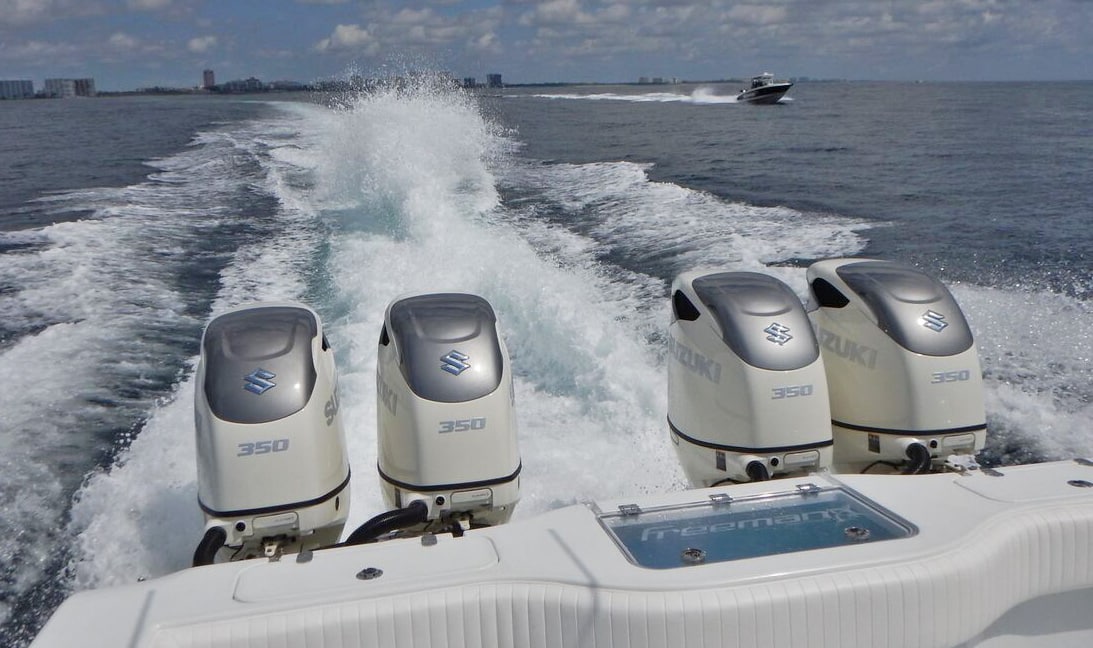 The DF350A Suzuki outboard engine is a torque-monster with a number of surprises. 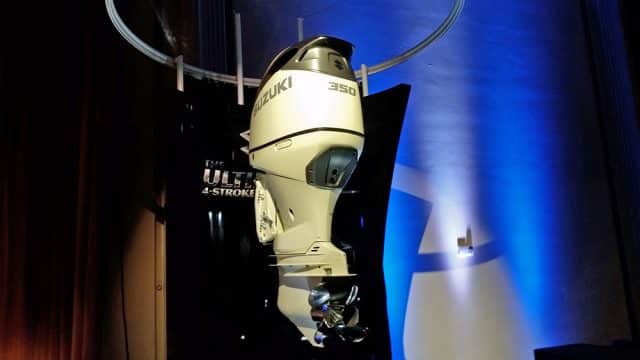 The Biggest Suzuki Outboard Ever

We gave you a heads-up when Suzuki introduced the DF350A 350 V6 4-stroke outboard, and now that this engine has been out on the water for a while, it’s time to take an in-depth look at how this potent powerplant has proven itself.

The DF350A is the biggest Suzuki outboard ever, and unlike some builders who utilize superchargers and computer tuning to get more juice out of a pre-existing package, Suzuki spent three years designing and building the DF350A from the ground-up. This 4.4 liter V6 is, like the DF250 and 300, kept relatively svelte by splaying the cylinders at a 55-degree angle, minimizing the width of the double overhead camshaft heads. Despite its potent nature, the engine can still be mounted on 27-inch centers. 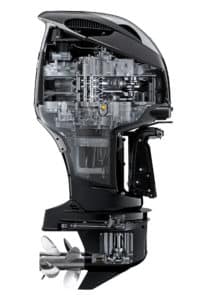 The Suzuki DF350A is riddled with new tech and carries a number of unique features.

This 727-pound powerhouse (versus 763-pounds for the Yamaha F350 V8 and 668-pounds for the supercharged inline-six Mercury Verado 350) has a long list of technical tweaks: light yet rugged shot-peened slipper pistons; dual intake louvers that convert water vapor into droplets that can be drained away to provide drier, cooler air to the engine; dual 10-hole fuel injectors for each cylinder that fully atomize the fuel and eliminate puddling; and an uber-high 12:1 compression ratio. On top of all that, the engine features drive-by-wire controls, 50-rpm engine speed adjustments for fine-tuning trolling speed, and a 54-amp alternator that can put out a whopping 40 amps while turning just 1000 rpm.

Okay – that’s all cool stuff. But the most unusual feature of this engine, bar none, is the contra-rotating propellers (not to be confused with counter-rotating propellers, which are on two different driveshafts; contra-rotating props spin in opposite directions on the same shaft). Swinging two props instead of one allows the drive unit to recoup some of the forward thrust lost to rotational energy, while also adding a huge amount of blade area to enhance traction. Suzuki says there’s 80-percent more blade area than usual, which prevents slippage and boosts lift. Think of those props like the outrageously wide rear tires of a dragster, which help maintain grip on the pavement and reduce the amount of energy lost to spinning. 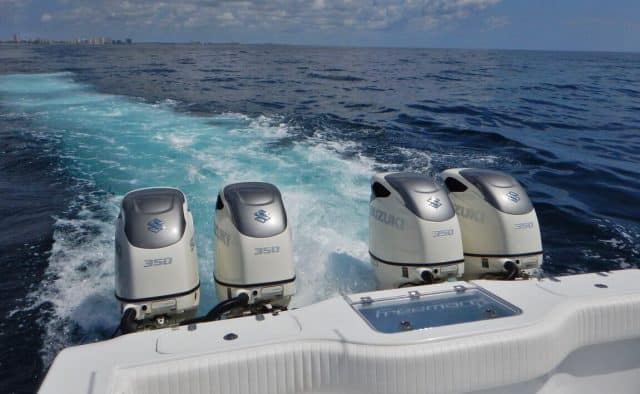 Suzuki DF350A On the Water

Talk to people who have run these outboards, and you’ll find a near-unanimous agreement that the net result of all these features is a serious boost in oomph coming out of the hole, particularly for large boats which might normally need additional horses to get up on plane in a reasonable amount of time. The other often-ballyhooed perk is increased lift at the transom, negating much of the need for trimming in at take-off and even reducing the need for trim tabs.

Opinion and personal experience are one thing, but solid numbers are another. So look at some numbers. Study Mercury’s Boathouse Bulletins, and Yamaha’s Performance Bulletins.

You’ll find that a 28-foot center console in the 3,500 to 4,000-pound range with a single 350 usually takes around eight seconds to get to 30 mph, and a 33-foot center console at between 8,500 and 9,000-pounds with twins needs more like 8.25 to 8.5 seconds. Both our experience and Suzuki’s published numbers show shaving off about a half-second, with the DF350A. Truth be told that’s a time differential that makes very little difference. What it reflects, however, is significant. Rather than feeling the boat struggle to get over the hump, it pushes right over from displacement to planning speeds. The extra lift at the transom prevents the bow from kissing the sky, and the entire transition is much less noticeable. We do not, of course, expect you to take our word for it – just remember these words, when you take the wheel and sea trial a boat with the DF350A for yourself. 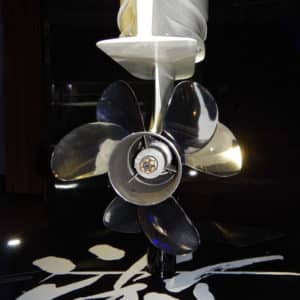 One other handling advantage the contra-rotating props provide which must not be overlooked is enhanced control when operating in reverse. The twin propellers provide gobs of bite, and much like a stern-drive Duoprop or Bravo III, dockside maneuvering is far superior to that of a drive unit spinning a single propeller.

Due to the still new nature of the DF350A, we’re not ready to stake any claims regarding the long-term reliability of this outboard. We do know that since its introduction the DF350A has been doing great, and we haven’t heard a peep about any issues thus far. (Try Googling “Suzuki DF350A problems” and see if you can come up with anything. We couldn’t, and considering how much people complain on the internet, we find that utterly bizarre). But one year on the brine simply isn’t enough time to expose any issues that might crop up.

That said, we do want to point out that the Df250 and DF300, which share some design similarities and come from the same Suzuki team, have proven to be exceptionally solid engines. And like its other models, Suzuki back the engine with a more than respectable five-year warranty. That shows some serious confidence – and we’ll be back to update you as time goes on and the Suzuki Df350A proves itself.

To get the manufacturer’s take and see all the specs, check out Suzuki Marine.