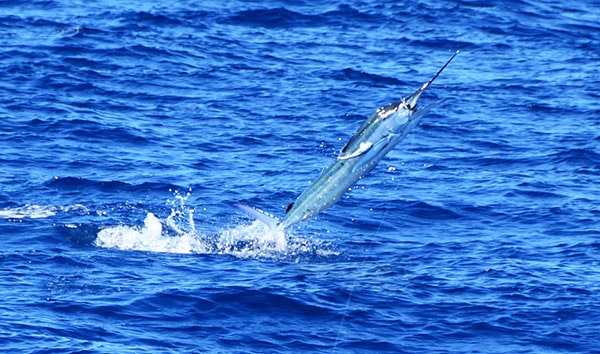 It was one of those Southern California “Santa Ana” nights – clear skies and soft evening breezes. The C Bandit was second in line at the bait receiver behind a small skiff; waiting behind us was the Caribbean Lady. At the request of Captain Peter Groesbeck, the sullen young man at the receiver grudgingly crowded the box again as both Captains Jimmy Decker and Rich Hamilton looked on. “Those are the best ‘dines I’ve seen all year,” Hamilton chortled. One of the passengers on the Caribbean Lady who knew Decker came over to see if we had any hot spots to share with them. Our tanks loaded, Groesbeck set the 75-foot Titan custom sportfisher on course for the lower 500, some 90 miles south. Wheel watches were assigned and the crew settled in for the journey down the West Coast of Baja to its tip at Cabo San Lucas.

Long before sunup, the eager crew was on the deck and out came enough trolling and bait sticks for twice the number of anglers on the boat. Decker, designated pit boss, tied on the last hook as the blazing Baja sun bathed the peninsula in a fiery orange light. Out went the two flat and two long trolling lines with colorful tuna lures and Hamilton and Groesbeck relocated from the enclosed wheelhouse to the much higher vantage point on the fly bridge above. Both began scanning the horizon for kelps, birds or any other telltale signs of life with their stabilized binoculars. Sunday football blared on the television throughout the day, but was frequently interrupted by rasping clickerrrrrzzzzzzzzzz sound as another fish inhaled one of the lures burbling in the wake.

We jockeyed from one bite to another, scoring on bluefin and yellowfin tuna, dorado and small yellowtail plus a few skipjack as we continued south. We spotted the first striped marlin of the trip on the horizon tail-walking on the surface of the sparkling water as well as the smallest swordfish any of us had ever seen finning on the surface. The reddish afternoon sun gleamed on the water as it sunk beneath the horizon followed by a sliver of a crescent moon chased by Venus as we enjoyed our bluefin tuna sashimi before sitting down to a seared tuna dinner with all the trimmings. All the while we continued toward tomorrow’s fishing spot – Cedros Island.

We arrived at the north tip of Cedros just as the sun glinted of the island with its green hue from recent rains. With no signs of birds or bait on the meter, we continued motoring down the lee toward Turtle Bay, across the Dewey Channel and on down the coast below Punta Eugenia. Groesbeck decided to stop at a kelp bed that he assured us would be right up Decker’s alley. As we slowly idled into the remote spot, C Bandit was surrounded by the kelp. Decker flung his “War Bait” across a wide expanse of water to the edge of the kelp allowing the lure to slowly sink, missing two strikes in the process. Grinning from ear-to-ear, he finished the retrieve.

“Look at the size of the bass following my lure,”

Decker’s distinctive voice boomed. Quickly casting back toward the same spot, he was startled by Hamilton’s “Fish On” as it echoed across the small bay. Next, it was Groesbeck, tight to his own lunker and suddenly, what Decker thought would be a clinic on calico bass fishing became a “show and tell” as all of us caught and released one bass after another for a half-hour or longer before resuming our southward trip. The weather remained our friend and we were able to fish a few stones along the way where we were rewarded with nothing exceptional – a mix of sand bass, rockfish and the ever-present white fish.

Back on course that afternoon, we spotted a second large kelp. As we approached it, a bull dorado leaped from underneath. Since we had filled our freezer the previous day, we ignored it, and we turned down-swell and resumed our course. As the sun was disappearing after dinner, we had our last bite of the day … our first striped marlin of the trip. While Decker fought his first striper of our adventure, the remainder of the crew watched him as we munched our dessert: Klondike ice cream bars. As he assigned wheel watches on Monday night, Captain Groesbeck titillated us with news of one of the high spots above Magdalena Bay having produced great wahoo catches for another boat two days ahead of us. “I want wahoo gear ready and in the water before 6 a.m.,” he directed before we headed for our bunks with a “wahoo kind of Tuesday” on our minds. Early, the cockpit bustled with activity as we impatiently waited for it to be light enough to put the gear out. As we slid on the top of the ridge, the four trolling rods were in the covering board rod holders with two jet heads long and two flat lines with rods vibrating violently as the Marauders dug deep in the water column. Just as the sun began its climb across the Pacific, we had a double. We bumped/hopped down the ridge throughout the morning. Some of the spots had already been picked clean by the long rangers, others were crowded with local shark fishermen, and are you ready for this? Freedivers with their floats dragging behind them. But we were still able to find enough wahoo to fill that roomy fish box on the C Bandit.

By early afternoon, we had passed the Thetis and had Cabo San Lázaro in sight. Groesbeck had talked to a few boats ahead of us that reported good striper fishing in front of the entrada at Magdalena Bay.

With that inside info, our “wahoo Tuesday morning” became “striper Tuesday afternoon.” Out came the Marauders, which were quickly replaced by Groesbeck’s striper set-up: two squid chains sweetened with a ballyhoo at the end of each of the chains – two chin-weighted ballyhoo on flat lines down the middle. We were barely past Cabo San Lázaro when Hamilton’s scream, “Follow on the right teaser,” pierced the air! Hoo Hoo … the striper parade began as fish rose to the teasers repeatedly. We trolled downhill, never backtracking and the stripers just continued to follow the boat like it was some kind of fishy Pied Piper.

A single here, a double there, even a triple. Some fun.

A newbie to Mag Bay striper fishing, Decker was dazzled by both technique and volume of fish. I can’t remember which fish he was on when he finally reeled it close enough for the official release; after the high-fives, he headed to the cooler for a cold one. Hamilton in a soft voice asked, “Aren’t you forgetting something?” Decker turned around with a quizzical expression. Hamilton just pointed to the bent rod in the holder, “You forgot one!” Decker snatched the rod from the holder and quickly dispatched his next fish. Decker did a double, his first ever.

Onward and downward we continued, finally running away from the striper gang by late afternoon. Wahoo steaks on the barbie, another classic Baja sunset, and we wearily plunked down at the expansive dining table in the salon, chattering like a bunch of magpies about our “striper Tuesday afternoon. ” As we prepared for our final night at sea before arriving in Cabo San Lucas, Groesbeck began, “Tomorrow morning we will be at the lower end of the finger about 8. That’s blue dog country and I want all the blue marlin gear out when we arrive there. We’re going to try and catch Decker his first blue.” “I could hardly go to sleep, thinking about a blue marlin,” Decker laughingly complained the next morning.

“Let’s get the fighting chair adjusted for you,” Hamilton suggested after all the lures were in their proper places popping, splashing and glinting in the bright morning sun. By the time Hamilton was finished, the mechanized chair was dialed in and ready to accommodate Decker during his [hopefully] impending battle with a blue dog. The hunt was on. Groesbeck tacked this way and that, covering favorite marks on his Furuno screen while watching and listening to the side scanning sonar for telltale signs of bait or a fish. “We caught a 440-pounder here,” he said pointing to a mark with a sly smile, “and another big one here, here and there. This is one of my favorite spots along the coast.” As great as the lures looked in the wake, the only brief moment of excitement was when a fish appeared in behind one. Decker leaped out of the observation seat where he had taken residence hollering “Follow Follow!” Looking up at the bridge, he watched as both Groesbeck and Hamilton shook their heads, “It’s a striper, get rid of it.” Crestfallen, Decker collapsed back in his seat resuming his constant vigil … watching the lures. By late afternoon, as we grew closer to our destination, the lures were pulled and the tackle was cleaned and returned to the rod racks. As the boat came up on plane for the final time of the trip, we all gathered in the enclosed pilothouse where we chatted and laughed over details of the trip. “I have never ridden on a boat as comfortable and quiet as this one is,” mused Decker. Hamilton agreed. “This rig is one of my favorites. I remember the first time I was at the helm, I was surprised how responsive this boat was; it handled like a fifty-footer. Tight turns, tight quarters, eased into the slip. It reflects Bill’s sportfishing heritage and his personality.” Continuing he added, “This is definitely the best for a trip like this: a luxury sportfisher that meets all the needs of the fisherman, including the extra large cockpit!

It’s been a trip of a lifetime.” As we sped toward cape rocks, Groesbeck pointed to them. “See the second one? During one hurricane many years ago, the 30-foot waves from it completely covered the first pinnacle and splashed onto the second.” Soon, we were slipping past an outgoing “Surf Rider 100,” a Cabo tour boat with tourists pointing and laughing in swimsuits with cameras in hand. As we cruised along the shore of the point littered with hotels and condos, we realized that our Baja adventure trip was coming to an end. Slowing, we headed toward the marina. As one, we agreed that the great weather, outstanding fishing, good company and, of course, the terrific boat had produced a memorable experience that would never be forgotten.