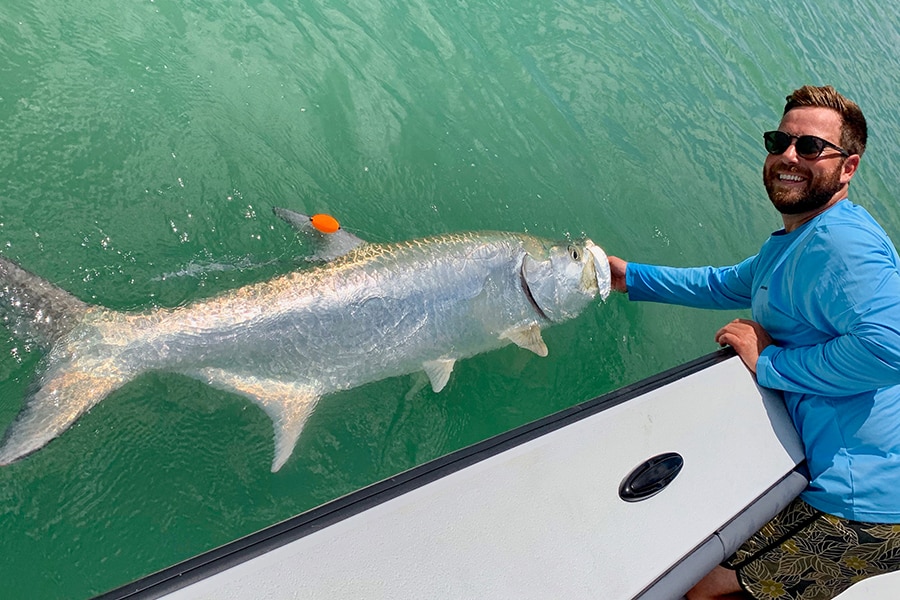 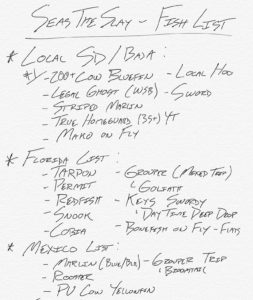 Every angler has their list. That bucket list of sorts that includes exotic destinations, fishing experiences of a lifetime, and species to chase. I’ve always had a “Fish List” for as long as I can remember but it wasn’t until I started this little side project that I actually took the time to sit down and formally write it out. So, in December, I did just that. 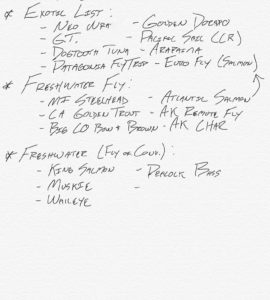 One of my biggest goals with this journey was to intentionally start crossing off the now ever-growing list. It’s not by coincidence that the “Silver King” was atop the list of non-local species. Tarpon are well known as a highly sought out, premier gamefish thanks to their aggressive and high-flying fights. An iconic fish I’ve seen in countless videos and shows that are apt to a variety of fishing styles. Live bait. Lures and artificials. Sight fishing. Flies. You name it, they will notoriously eat it and you better be prepared to hang on for the upcoming ride!

With a bit of a chaotic August work and travel schedule, I knew my best opportunity to squeeze in my next Student of Slay would be after a work trip in Sarasota. I was thinking that it would be a fun change of pace to take advantage of the incredible backwater and inshore fishing opportunities in the southwest Florida area. Now, I know I’m going to piss off my fellow left coast friends but let’s call a spade, a spade. We can’t hold a candle to the vast diversity and abundance of inshore fishing Florida has. But I digress. 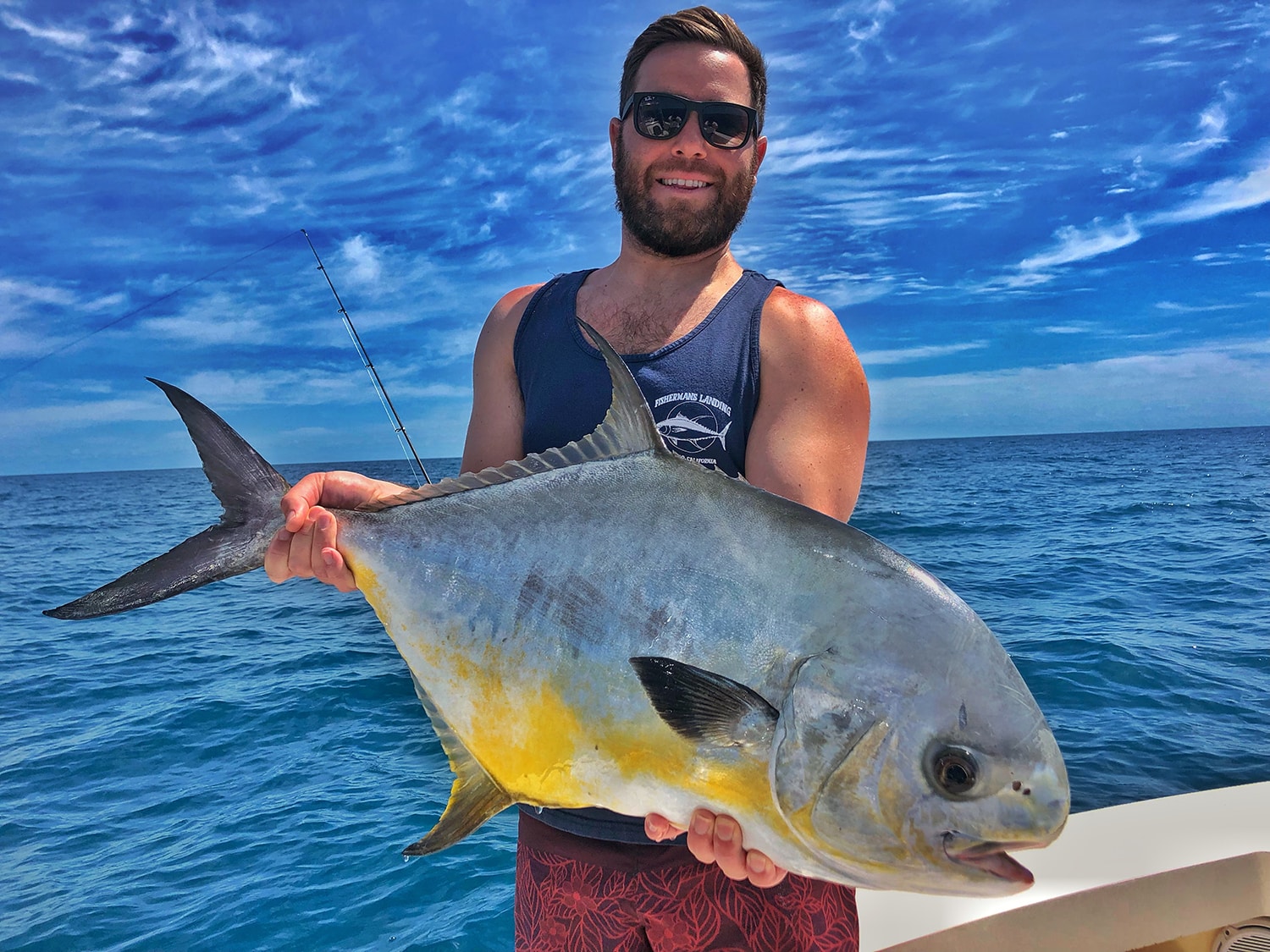 Knowing that there is no substitute for local knowledge, I reached out to my buddy Captain Chase Fulton for a local recommendation. I had the opportunity to fish permit with Chase in April who is from the area but currently down in Islamorada running swordfish trips on a very well-known Freeman. In my message I noted that “hoping to target snook, redfish, maybe tarpon (if around?), etc.”. 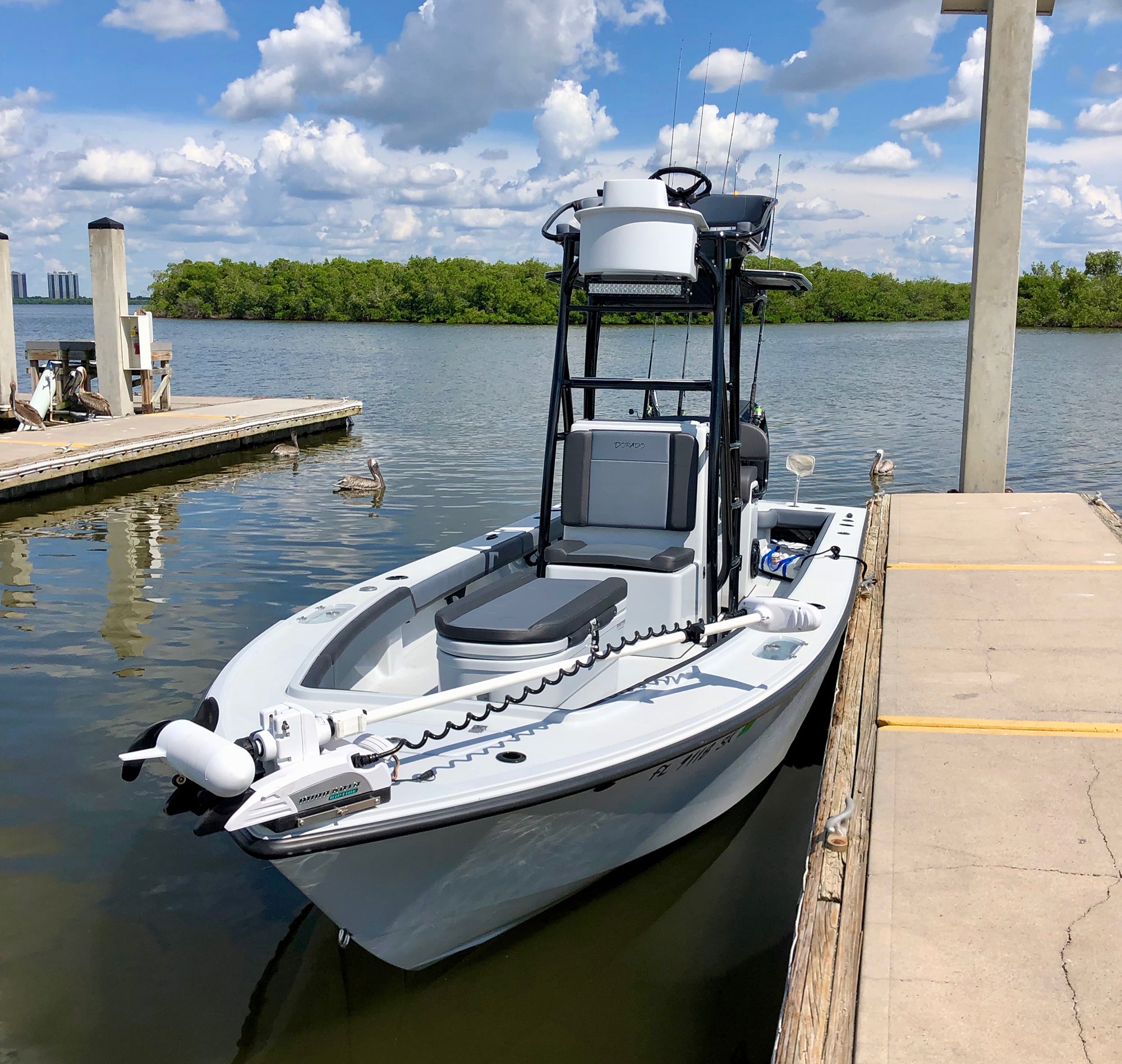 I arrived at the boat ramp on Lover’s Key, accompanied by an incredible sunrise over the gorgeous backwater landscape. I stepped aboard Eric’s custom-built Dorado bay boat that was fully dialed for fishing and felt surprisingly big for its size. I couldn’t help but admire both the layout and fishing features it was outfitted with. We pushed off and throttled towards the nearby inlet.

“So, these Tarpon stick around all through summer? I thought they were more migratory and would move in for a bit in the spring then run back out.” – I asked with little actual working knowledge of and under assumptions from the few things I have read prior.

“Absolutely. Honestly, some of my best tarpon fishing trips are from now through late fall. Last season, I took a family who fishes with me every year on Christmas Eve out and we whacked them! The last fish we caught was easily a 250-pound plus monster!” – Captain Eric informed.

Proof indeed, there is definitely no substitute for local knowledge and spending days on the water, knowing exactly what’s actually going on in your backyard.

As we arrived at our spot, I was surprised by two things. Firstly, that there wasn’t another boat in sight! Especially having just fished around the yellowfin “parking lots” in San Diego a few days prior. Secondly, how close to the beach we were going to be fishing. I could tell the latter by the immediate surface activity as we rolled up.

“Well, I guess we are in the zone!” – I said with excitement.

“Yep, they moved up to the next swim buoy from yesterday, but these fish have been steady here for a while. We’re going to start with some artificials they have been eating well.” – Captain Eric instructed as he demonstrated the jigging technique to use.

We used the trolling motor to position us and started firing the swimbait lures into the zone. Letting them initially sink for a couple of seconds before jigging and retrieving back. Sure enough, Eric was bit and the small but mighty Shimano Twinpower was screaming. Right away the infamous Silver King did what they do best and fully cartwheeled out of the water.

“He spit it. Thankfully, that was a big one for this setup and would have hurt. Well, looks like they still want the artificials. Let’s swap your color as they seem to be all over this one lately.”

A few casts later and boom! I had my first bite, and wow! The strike came on the drop while jigging and I definitely was not ready. When these fish bite they absolutely crush it. I mean, there is no way to mistake the bite as it was definitely a very aggressive, hard hit.

Now knowing what to expect, I continued casting, feeling a bit more prepared but also slightly intimidated. If these things bite the lure like this, what is the fight going to be like? I got a quick taste as I set hard on another strike and got tight. Unfortunately, not for long as the fish somehow spit the hook despite inhaling it (as confirmed by how far up the leader was chaffed). 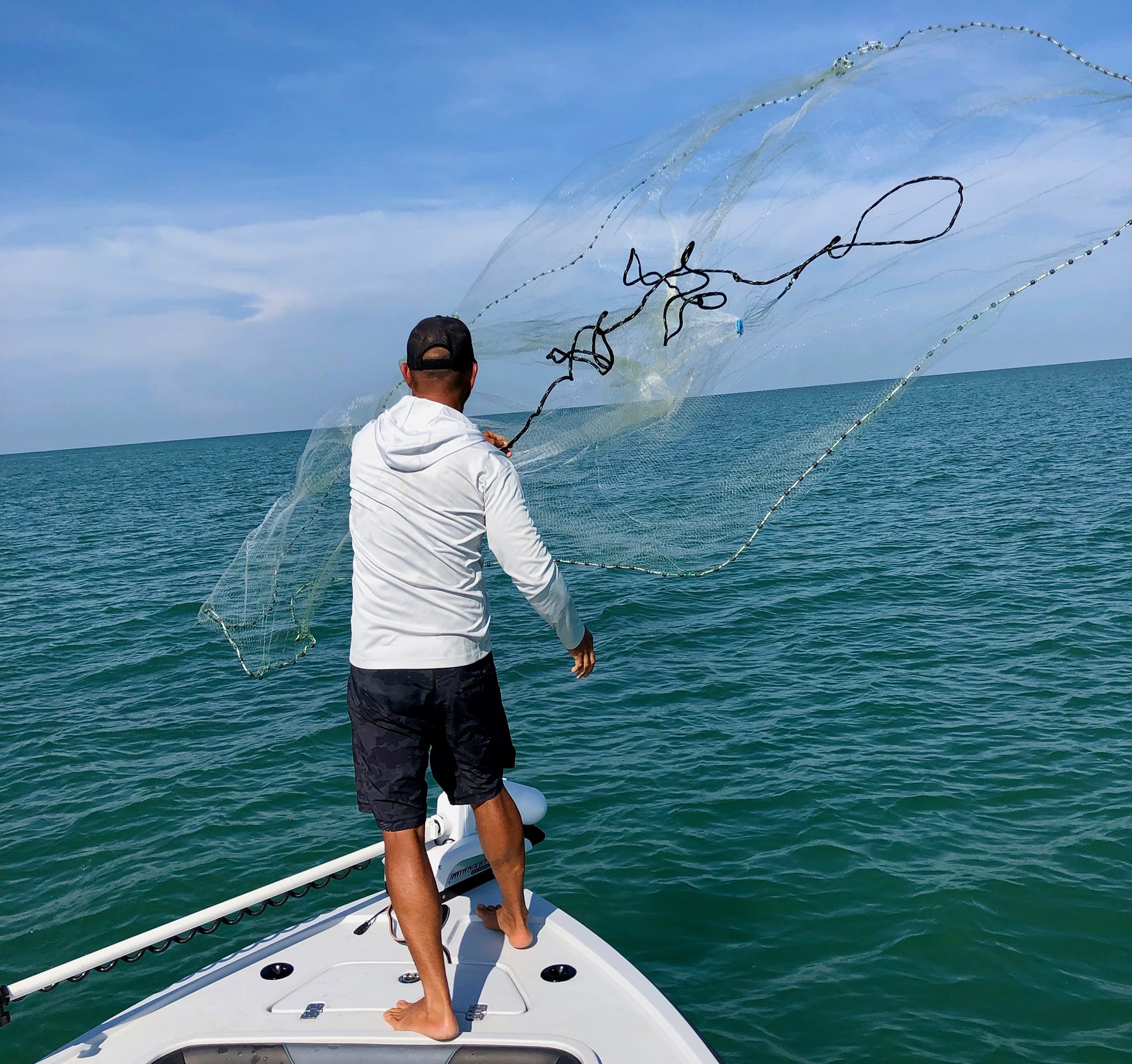 The bites remained steady on the artificials and I couldn’t get over how active these fish were all morning. There was never a point where you would scan the water and not see fish rolling, boiling, or cartwheeling on the abundance of bait along the beach. Like all good charter captains, Eric wanted to boost our odds by making a quick bait run so we could present multiple options and hopefully increase our land ratio on the beefed-up live bait setups. 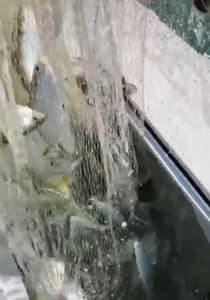 “Here we go, big school of bait in that dark spot under the birds.” Captain Eric pointed out as he readied the cast net. We drifted in neutral watching the direction the bait was moving, which in favor of our luck was literally into the side of the boat.

“One and done today huh?” I sarcastically pointed as we dumped a loaded to the brim cast net into the live well. No bait barge needed.

Back to the program and as the slack tide started to suck back out, the Tarpon activity level picked up to the point of damn near overstimulation. They were literally rolling or crashing bait everywhere. Five feet off the side of the boat to a couple of hundred yards down the shoreline in either direction. Not that I had any doubt prior, but it was vividly clear that Captain Eric has this tarpon fishery fully dialed in and our afternoon was about to go off.

Now with a couple live baits off the back while continuing to throw artificials from the bow, it was time to get a few of these beasts boat side for the “mandatory” Instagram photo op. Evidently, I was up first as I looked back while retrieving my lure to see one of the two live bait rods practically folded in half. Our bait was picked up and reeled tight with one hand while trying to place my casting rod in the seatback holder. I picked up the pole and was greeted with a screaming first run and massive jump of a very nice tarpon. 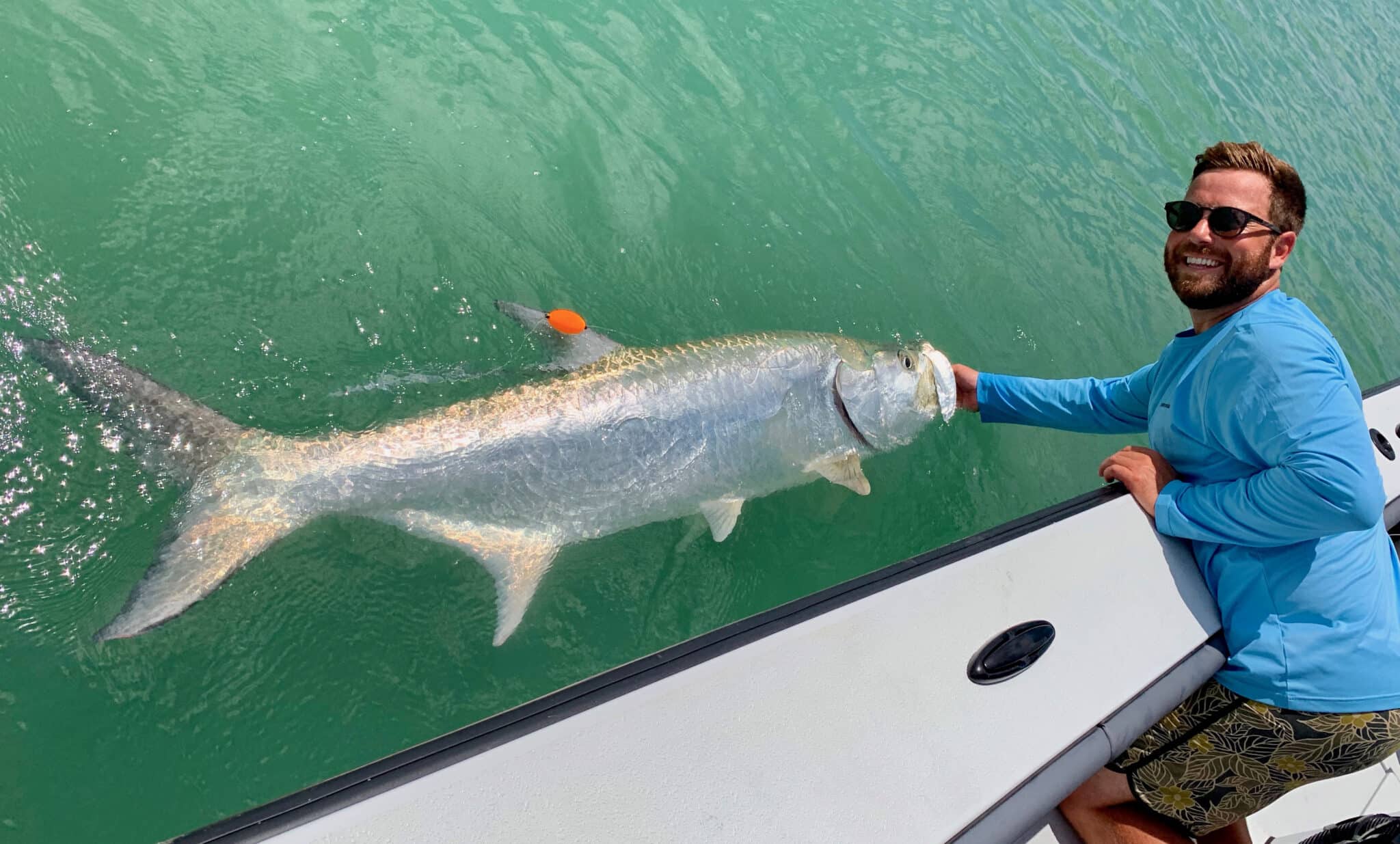 The first jump ended up being one of only a few, as this particular fish wanted to bury itself in the shallow sandy bottom and kick my ass the remainder of the fight. After farming a couple in the morning, I wanted to be careful not to over fight this one. I kept steady, firm pressure on her, but she refused to give an inch. The fight went on! With the fish having the upper hand a majority of the time. But then she finally gave in and came up. There she was, my first tarpon and a very respectable one to boot! Captain Eric leadered her and I held on to the lower jaw for an alongside the boat picture, and release.

“Well, that was rad! These fish are no joke and I feel like it kicked my ass. Alright, beer time and I think it’s your turn, next captain.” I said with what I’m sure was a shit-eating grin matched with a waterfall of sweat rolling down my face.

Turns out, I may have jinxed myself by trying to pass the turn to Eric as we reset on that school. As we chatted about fishing stories, dream trips (which he has a couple upcoming that definitely spark envy) and just about everything else, I watched another nice fish roll on top of our bait. I scrambled over and picked up the rod immediately. I was shocked it wasn’t bent and tight already but after a few cranks, the next one was on!

“I was going to say, there’s no way that fish missed our bait! It rolled right on top of it and incredible to watch that bite.”

For the second round, it was time for the tarpon matinee as this one put on a show. The fish jumped. Cartwheeled. Ran up the side and around the bow. Jumped more and did all the things that I had seen in all the videos. No doubt these are one of the most prolific and fun gamefish I’ve ever fought. I was now fully hooked on wrestling with these dinosaurs and before the day was even over, I was already looking forward to my next opportunity to chase them. 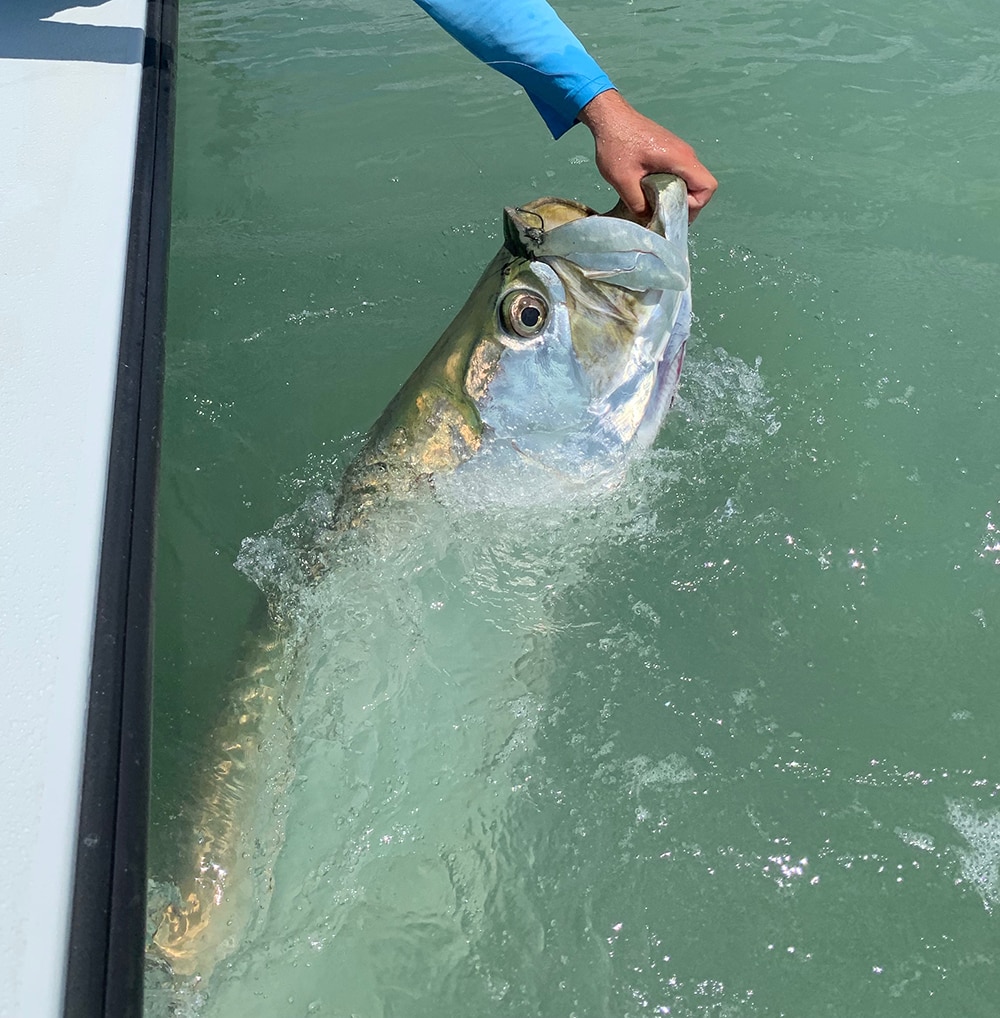 We got this fish beside the boat much quicker as it wore itself out, putting on the show for me. Another very respectable fish and once laid on her side we could tell she was even nicer one than the first.

“Good work on that one man and that’s a really nice poon for sure!” – Captain Eric congratulated me.

Although our initial game plan was to spend the morning chasing Silvers Kings then eventually sneaking into the backwaters to pursue snook and redfish, there was no way we could leave this bite. We kept on them well into the afternoon both on baits and Eric especially, on swimbaits. 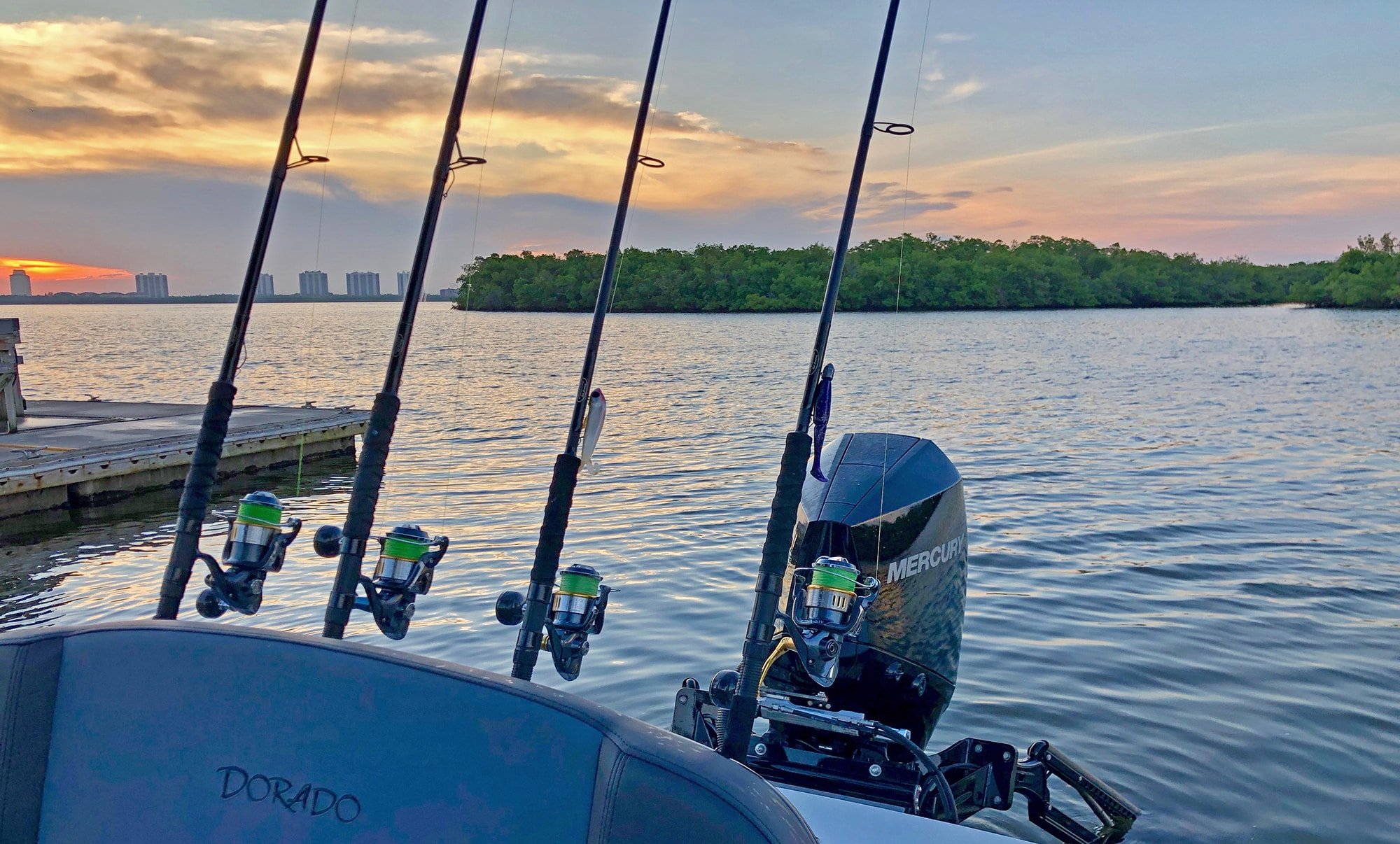 Like most days on the water, the time flew by and it was time to call it. Captain Eric is an extremely fishy guy and a top-notch charter guide. It’s always such a privilege to meet awesome new people along the way and almost just a bonus when they are truly experts in their fishery. I can guarantee this will not be my last time fishing with Eric and hopefully can get him out to the West Coast for some bluefin!

So besides another epically lucky fishing trip to notch on my belt and a new species to cross off the list, what were the takeaways to carry forward?

Thank you again, Captain Eric Davis, for an unreal day chasing dinosaurs. I’m now fully hooked (very punny, I know) on the tarpon program and extremely appreciative to have opportunities such as this one!