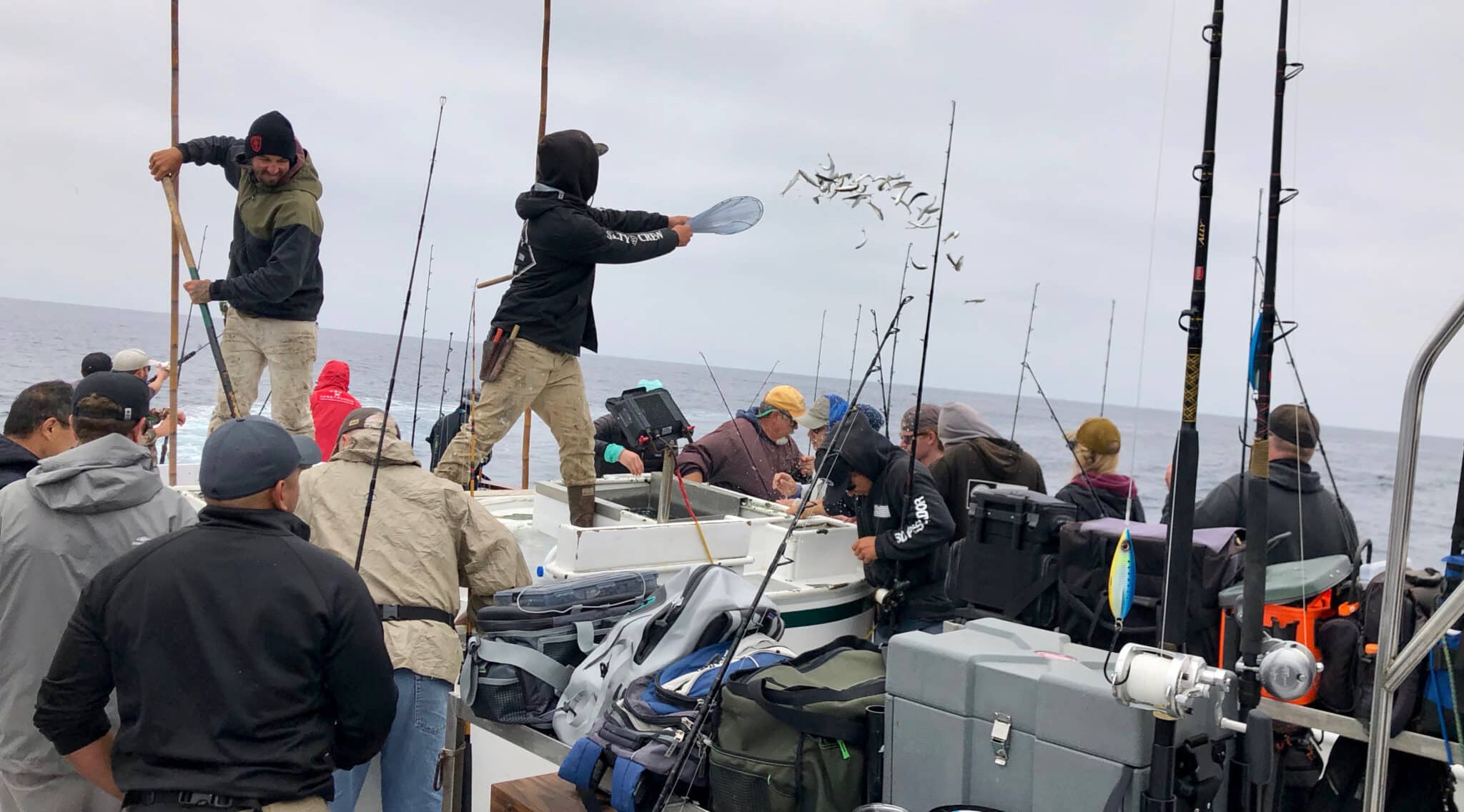 Two short mantras that will likely resonate with any serious angler. In itself, they both seem a bit obvious and simple but in reality, when the fishing isn’t easy or especially when chasing an apex predator like bluefin tuna – this mindset can completely make the difference. For this month’s trip, I decided to get a change of pace and a fresh perspective. Not a change in the waters I would be fishing or the species I was fishing for, but in the environment and way, I would be. 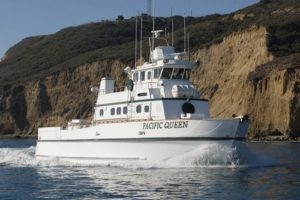 I noticed those two short, but meaningful words of encouragement printed above Captain Gavin Harbour’s seat in the Pacific Queen wheelhouse. The seed for this trip was planted when my buddy Juan and I were recently pondering “How does the Pac Queen put up such consistent numbers on bluefin?” For me, the best way to find out was to go fish with the crew and captain that have built a solid reputation for being one of the top producing bluefin tuna sportfishing boats in San Diego’s legendary fleet.

Knowing the importance of proper gear for this style of fishing, I thoroughly checked, prepped and gathered my quiver of tuna sticks days prior. No more important are the “tools of the trade” than bluefin fishing, but I felt confident my fleet of Shimano Talica reels and Seeker rods would be up to the task for battling this elusive beast. 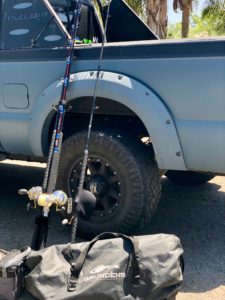 The last few seasons I have been entrenched in learning how to find and fish from a small private boat, so I thought it would be a good time to mix it up. It has been a few years since I last jumped on one of our local “sporties”, but I was excited about the opportunity to get out for a day and a half trip. I was immediately glad I did as a huge part of the party boat experience is meeting and socializing with other excited anglers. As we cruised out to the tuna grounds, I shot the breeze with a couple new boat buddies, kicked back a few cold ones and eagerly awaited what was ahead.

I woke from a quick hour and a half nap to the tune of the diesel engines winding down as we started to slow. Already too excited to sleep anyway, I opted to get up and hang in the galley to ensure I was ready to rock for the early morning,“Flat fall” jig fishing in the dark program. We stopped, the deck lights flipped on and it was time.

“Let’s give this a shot. We have really good marks under the boat 200-250-feet deep.” – The captain called out over the boat’s speaker. 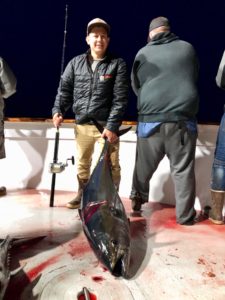 Everyone grabbed their heavy flat fall setups and rushed the port side rail to drop their jigs. No more than 15-20 minutes, the boat had its first hookup. Then another 10-15 minutes after that, we had second and third hookups. The Pac Queen crew stuck gaffs in our first few bluefin tuna and we were officially on the board, well before the sunrise.

I noticed my new buddy James that I had hit it off with on the way out, was swapping out his jig for a different pattern. Shortly after, I heard the crew call out “FRESSHH ONEEE” and looked down the rail to see James tight on a fish.

“Yeah, buddy!” I cheered as he worked up to the bow to fight his fish.

“Glad I swapped flat falls. This was on my first drop!” – he replied with a smile. Making the adjustment and being rewarded immediately was very cool to see. 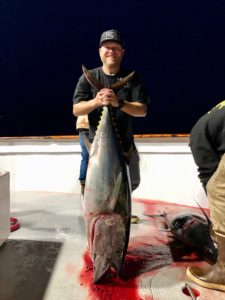 Also, getting in on the action was another new friend who I met on the ride out. Jon and his father David were both clearly avid sportsman and generally down to earth guys. Chatting with Jon, he was also primarily a private boater who was eager to switch it up and fish the bigger sport boat.

After the dust settled and the dawn grey light turned to morning, it was time to move. Another beautiful thing about fishing the big party boats are the amenities, notably the food. Pacific Queen crew member and all-star, Jarred, readied up some breakfast burritos as we reshuffled. I popped into the wheelhouse to observe Captain Gavin at work. His program for finding was something I’m very familiar with. Glassing for surface and bird activity in the gyros while also simultaneously scanning for subsurface schools with the boat’s sonar.

However, one big advantage the sports boats have versus a majority of small private boats is side-scanning sonar. Gavin turned us towards birds working in the distance. On approach, the steady ticking sound of the side-scan drastically changed tones. The crew was notified to start bailing live bait over the side. We slid into a big school and tuna “BOILS” started to pop on the surface around our tossed chum baits.

Prior to pushing off the bait dock, Captain Gavin gathered everyone in the bow to discuss the game plan and what to expect. He emphasized the importance of “choosing the right bait” and proper ways to hook them. Although live bait fishing has been a staple in my own fishing pursuits, I really took this to heart and tried to focus on while at the bait tank. On this stop, it didn’t take too long before people started hooking up and landing nice 20-30-pound grade tuna. The crew continued to throw steady “ones and twos” and the school stuck with us for a steady pick for those who put their time in on the rail.

However, I couldn’t get a bite to save my life. I put even more time and energy at the bait tank selecting what I hoped was the hottest sardine. I tried nose hooking. Belly hooking. Shoulder hooking. Casting as far off the side as possible. Dropping off the side gently and letting the sardine swim away from the boat. Being one of the first baits in the water on the slide. Waiting until the fish settled in on our chum. After seeing consistent smaller grade fish, dropping down to my lighter 25# live bait setup. All for nada, and frustration began to set in. 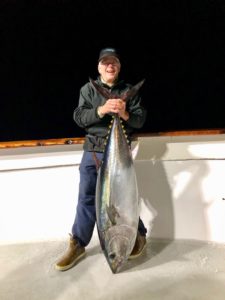 After the bite slowed, I again accompanied Gavin in the wheelhouse while we made a move. I didn’t want to be a distraction, so I asked a few questions but mostly just watched and marveled as he worked. Again, the program for finding fish might sound “standard” but I think what makes the difference on why the Pac Queen team has been so successful of late is much deeper. This probably sounds a bit cliche, but it truly felt like the intangibles were the key. The team’s attitude and burning desire to put their customers on fish. The deck crew that showed a good balance of the assertiveness needed to take control of chaotic situations mixed with the professionalism to not discourage anyone. Endless high energy and drive to find and land every fish we came across. At the end of the day, this is a crew of true fisherman with a sincere passion for fishing.

Now more than ever those words set in. He had put us on good schools of fish, and I hadn’t capitalized yet. It was time to put my head down and grind through every opportunity for the rest of the trip. We slid in on another school of fish and crew jumped into action to fire them up. I dropped my sardine off the stern, and it took off like a rocket. No longer than 30 seconds, my spool spun to the unmistakable speed of being bit. 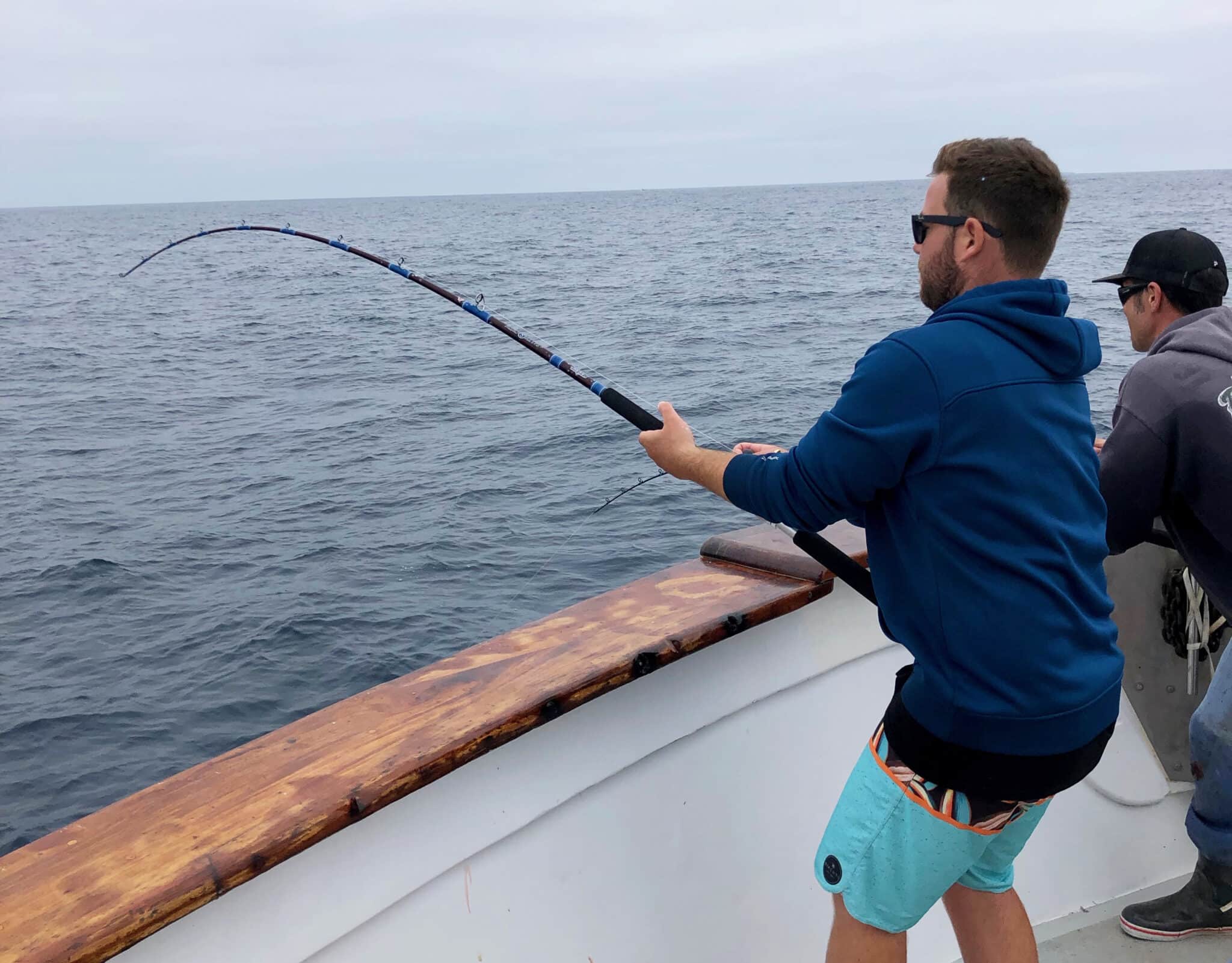 “FRESH ONE!!” – The crew chanted as I raced up the rail to the bow to follow my fish.

I knew pretty quickly that I had a nice one on the end of my line and with the recent nature of these bluefins, was in for a long-haul fight on 40# test. Long screaming runs. Violent headshakes. Powerful tail beats. I felt it all on the lighter setup and fought the fish with confidence knowing my gear was up for the task. My personal endurance and fishing fitness (if you will), well, there’s room for improvement in that department.

This school was eager to bite and before long we had about 6 of 7 of us all hooked up. Some were lost despite the angler’s and crew’s best efforts. More “fresh ones” were hooked and new faces joined in next to me to battle. But I tried my best to stay hyper-focused on my fish and rely on the crew to manage everyone’s lines. Which they do well on this boat. 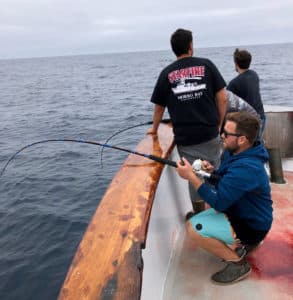 I feel like I got semi-lucky with my fish as even though it was extremely mean, hard pulling and wanted to fight me up and down, I only had to move from the front to the back of the boat once. I basically was able to keep the fight up in the bow and on the rail. Back to my fitness, or lack thereof, this fish kicked my ass for over an hour. I relied heavily on using the rail to keep pressure and slowly take line as it would give me. The few times I stood up and tried things like short pumping only made it more pissed. But finally, with some good coaching from Jarred and Nathan, we had the fish circling in gaff range. I was on the board!

The bite continued and more 60-80-pound bluefin came over the rail as the light faded into our final night. While enjoying a few celebratory beers, a group of us gathered on the bow to cheer on fellow angler David Wilder. Who was well into an hour and a half plus fight with his 2nd bluefin of the trip. The crew pulled David’s well-earned fish onto the deck and it felt like the perfect way to wrap up our trip of limits style fishing on a trophy species. The Pacific Queen managed to put 44 Bluefin on boat! 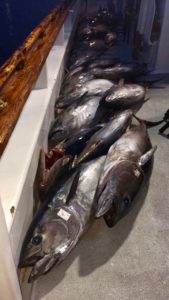 Many caught their first or personal best on this trip. A few others suffered some heartbreaks after endless persistence at the rail or hard-fought battles. But no matter, everyone was smiling. There was a palatable feeling of gratefulness and excitement amongst us all. I think we all knew that we had just experienced a special trip and for me personally, it was a really re-energizing change of pace.

Beyond just the overall change in the environment and fishing experience of the trip, the timing of the lessons learned from this one couldn’t have been better. As these bluefin slide further up the line into easy striking distance for a small boat fisherman, I feel more prepared to have success on my own thanks to this trip on the Pacific Queen. They reminded me to: 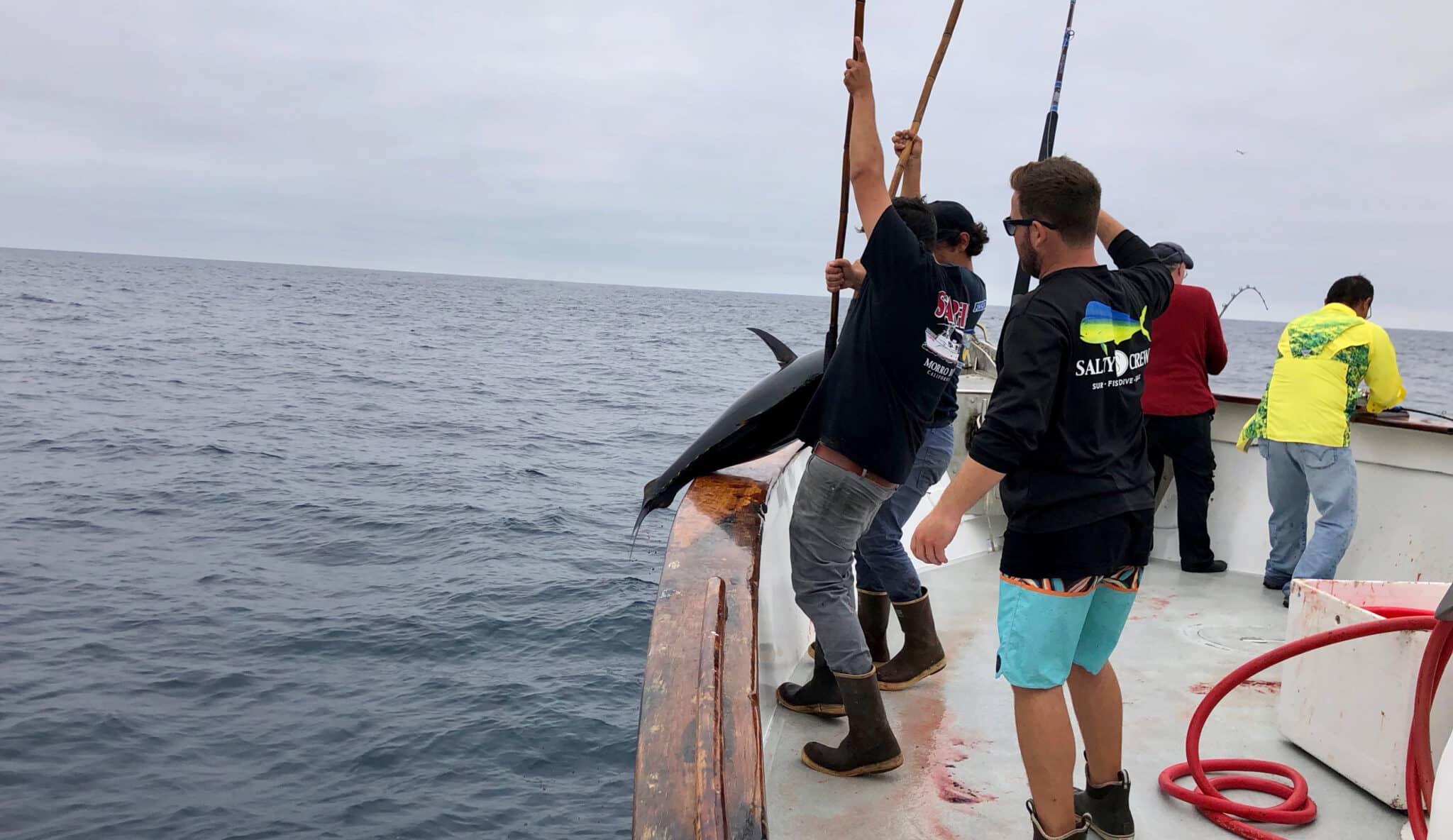 A special thanks to the entire team on the Pacific Queen! The hospitality, professionalism, and culture of fishiness they have created on that boat is world class. No matter your experience level, I think every angler should fish on one of San Diego’s sportfishing boats at least once and there may be none better to jump on than the Pac Queen. I’ll certainly be a repeat customer and extremely grateful for how this trip turned out.