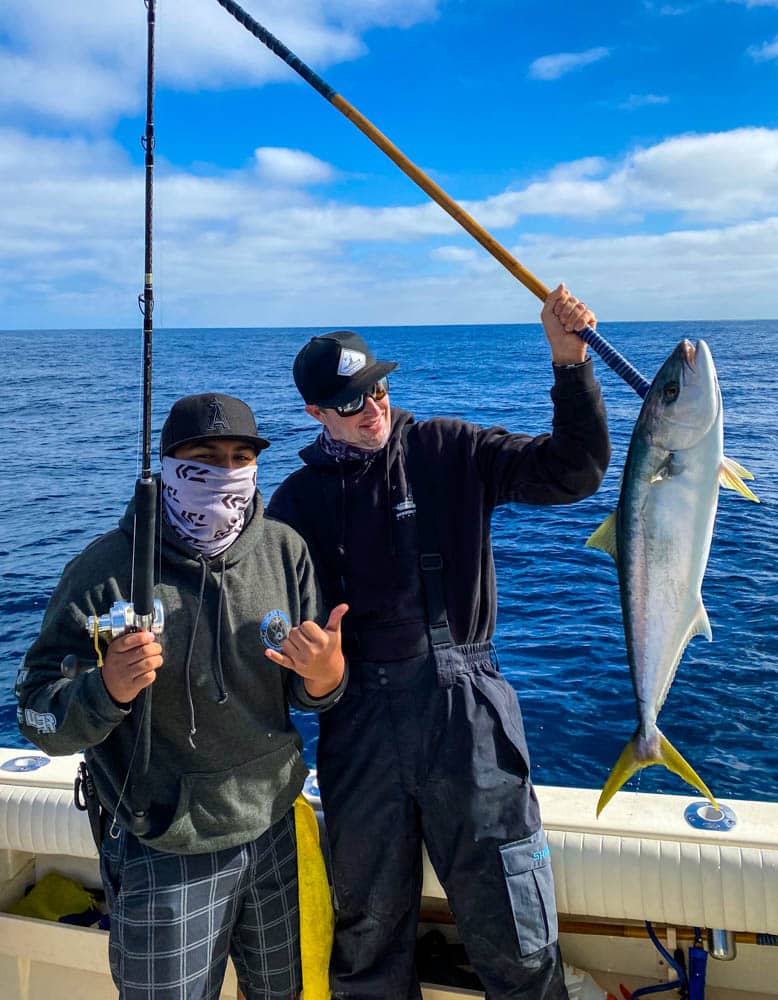 I think we can all agree that 2020 has largely been the “year of the dumpster fire” as I so endearingly coin it.

Hell, even that crude analogy may be putting it lightly versus reality. But I digress. For me, one thing that has remained is the push and appreciation for the outdoors – especially the sea. And although some of my more grandiose, destination-based fishing trips have been sidelined, my desire to explore my local fishery grows.

This season will largely be dedicated to just that. Adventuring in my backyard waters and using this otherwise negative situation to really dial in learning the nuisances of the Southern California bight. It’s species. Their patterns. The tactics that yield the best success. Soaking it all in and logging that precious time on the water to truly master this craft.

So, although the circumstances and world as we know it are completely different from past years, the goal remains the same. Connect and fish with the true pros and specific to 2020, the pros who help define our Southern California waters. Learn from those who do it best.

When the time came to safely get back onto the water, the perfect opportunity surfaced, and the stars aligned to jump aboard “The Mothership” with Seasons Sportfishing. A close friend and mentor along the way, I was elated to reconnect with Jamie and his deck boss, Dave “Fitzy”. The bonus kicker here was that I was an add-on to the group put together by the Seas the Slay – Support Local giveaway (thrown a few months back) winner, Raul Tirado. As an anecdotal side note, Raul turned out to be an extremely grateful and genuinely shocked lucky winner. So, if karma and luck were to be of influence at sea, it was time to test it. 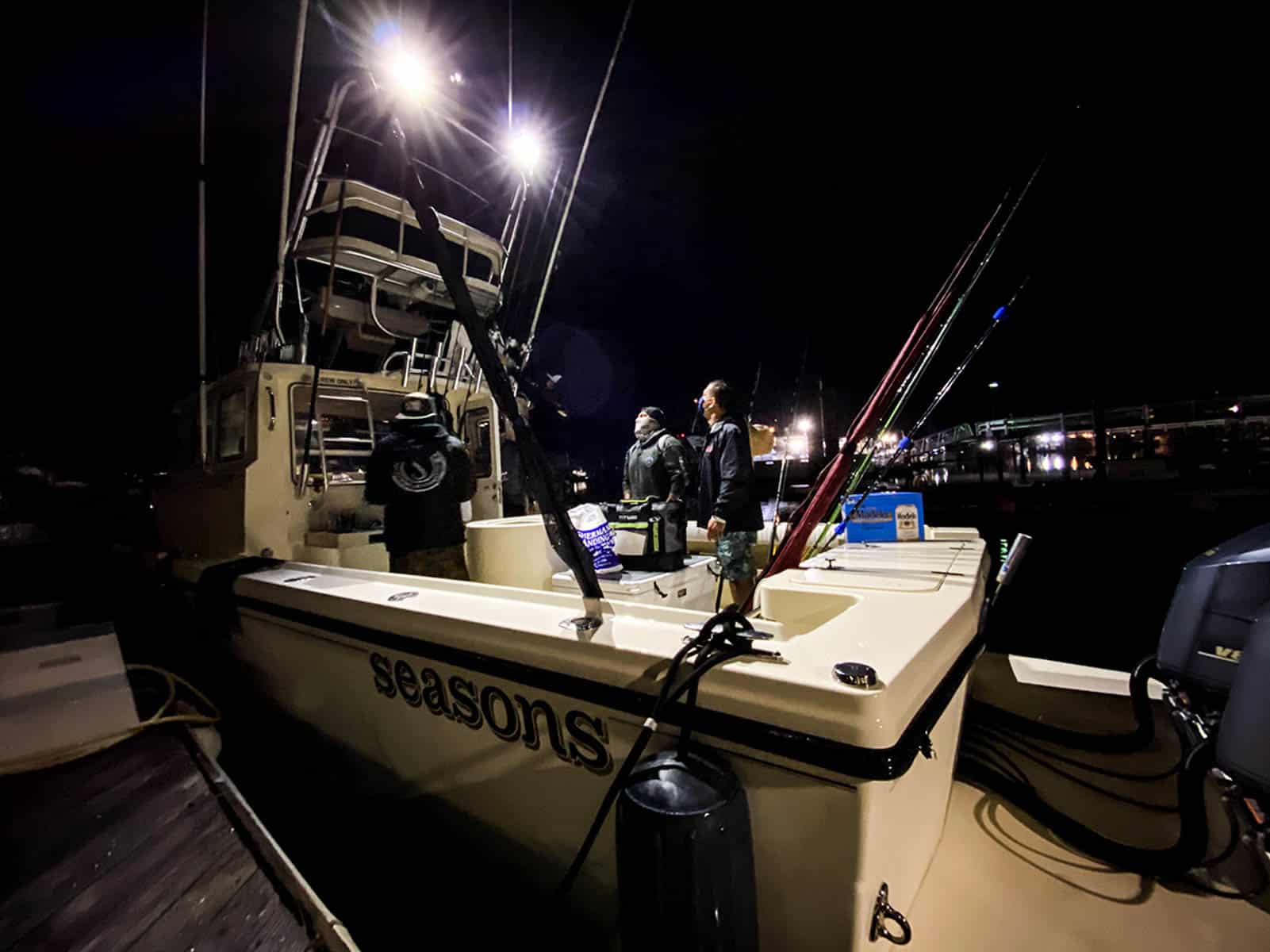 I arrived at Fisherman’s Landing, welcomed by the familiar dew of the salty air. Walking down the docks, I met up with our crew for the day. Raul, his uncle Frank, Frank’s son Chris, and fishing buddy Jason. Quick intros were exchanged, safety rundown completed, dock lines untied, and we coasted off into the predawn dark to our always first stop, Everingham Bros bait dock. 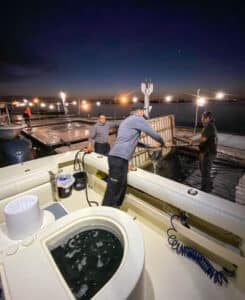 Catching up with old friends and creating new ones is always a big component within fishing but everything felt amplified on this trip. There was palatable and genuine group stoke to be back on the water. Casting the land-side chaos aside and being able to zero in on the day ahead. 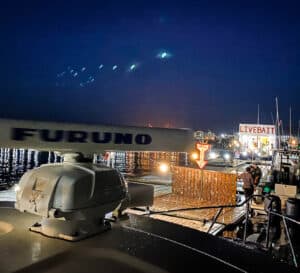 Tuning out all other distractions and having a singular focus on one goal was just what the doctor ordered. It was going to be a good day!

The Pacific greeted us with a touch of “morning sickness” (choppy seas) but the time was quickly passed with the standard ritual of swapping fishing stories on the ride out.

“We’re going to check out a new zone today. That other one that’s been popular this week is going to be insane with the holiday weekend crowds.” Captain Jamie shared as we chatted about the day’s game plan.

These are the vital exchanges I live for on these trips. Being able to pick the minds and learn the thought processes of great captains like Jamie. I appreciated his plan to stay away from the inevitable hoards to find our own fish, but I also picked up on another key nugget from our conversation.

Sometimes it is just as important to know where NOT to go as it is where to go. Sure, a fresh set of coordinates from a tight-knit “code group” on a hot school is tough to beat. But there’s tremendous value in being able to cross off spots. Poor water conditions. Little signs of life or bait. All indicators that can help point you away from slow zones. Luckily, we had some very good, “bad” intel. So, with the circus to the northwest and poor water conditions over a popular fishing spot on the inside, we pointed southwest. 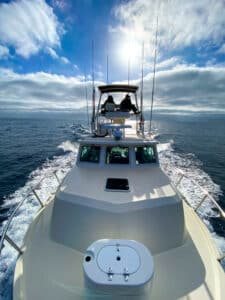 As we started our search, we almost immediately stumbled upon a very distinct dirty to clean water break. Jamie and David wasted no time, jumping in the tower and glassing the horizons with two sets of gyro-stabilized binoculars. Which turned in quick results and pointed hard us to the left.

“There’s a massive bird pile, diving and going crazy a couple of miles out. Has to be at least 50 or more terns!”

We steadily steamed that direction, everyone on deck scrambled to make their final preparations. On approach, Jamie turned up the volume on the Furuno full-circle scanning sonar. “Two really big paddies lined up right where those birds are. Let’s give this first one a shot! Dave, dump a scoop on them and watch for signs of life under.”

As we started our first drift, that same feeling from the dock of overwhelming stoke resurfaced and I felt flushed with adrenaline. Fitzy brailed a few more bait nets of chum bait towards the paddy and that long lost expression “hook-up!” rang out. It was our lucky winner, Raul with a fully bent rod and screaming drags on the first fish of the day. We were back! The tumultuous roller coaster ride of the last couple of months faded as the entire team cheered on Raul. A very solid, paddy grade California yellowtail hit the deck. 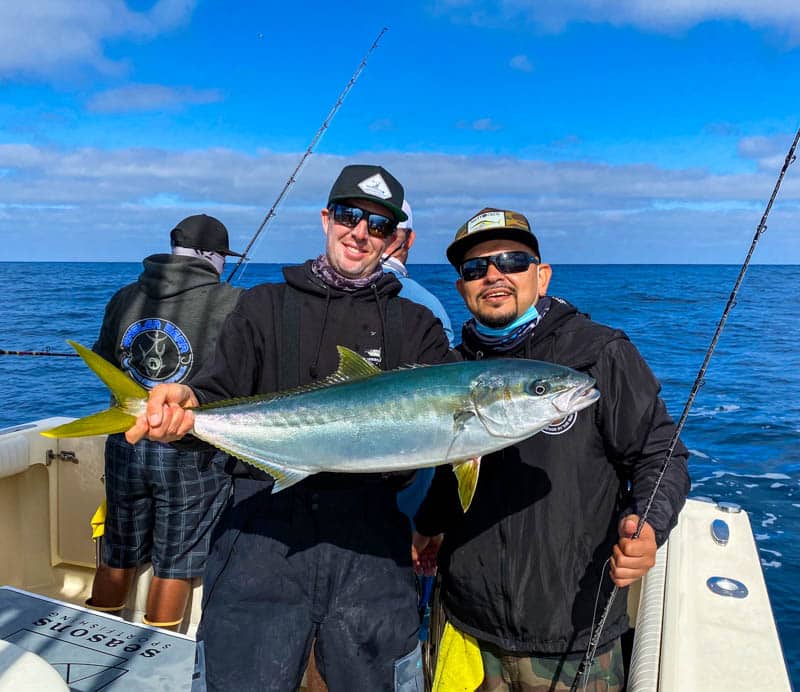 Little did we know what lied ahead and the domino effect that first yellow would have. No more than a minute later with 5 baits still soaking on that initial drift, the unmistakable “knock” of gamefish on the sonar picked up in volume and cadence. Immediately followed by, “I’m on!” as Jason started the battle on his first fish. The standard hoots and hollers shouted out as I wound in my bait to put a fresh one on. 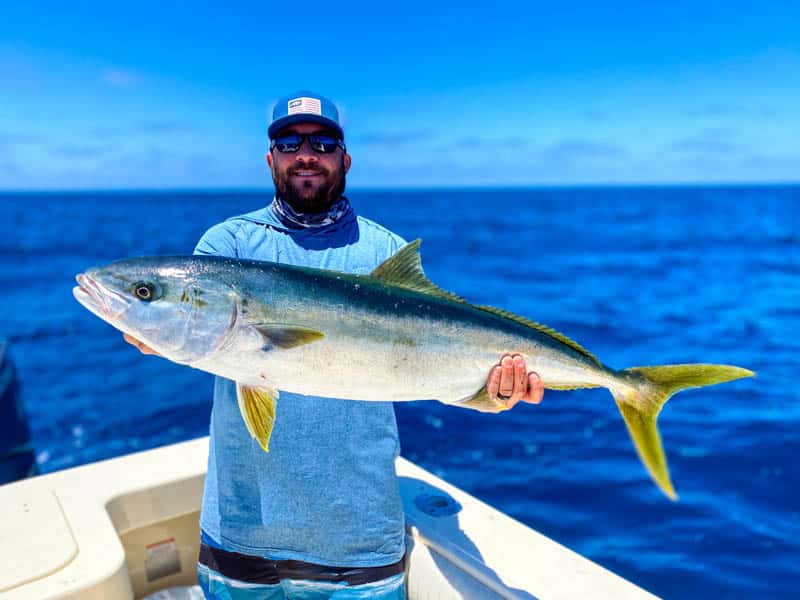 “Coming down the right side of the boat. Get ready guys, they’re coming back towards your baits.” Captain Jamie informed as his well-trained ear picked up on the sonar without having to glance back.

Using the captain’s intel to my advantage, I gave a quick underhand flick of a lively sardine off the starboard side. My bait took off like a rocket then darted back up the side towards the bow. The pursuit was on and despite my giddiness to get on the board, I waited until the free spooled line spun rapidly against the light pressure of my finger. I’m on! That feeling of the rod loading up never gets old and neither does the ferocious fight of a yellowtail. Pound for pound, they are one of the gnarliest. 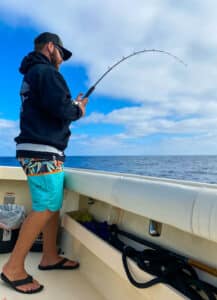 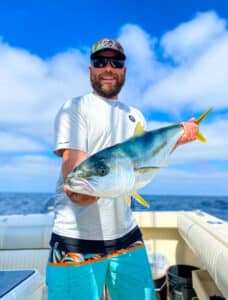 That very first drift we went 4/6 and after a quick reset, our second drift came up blank. We moved over to the neighboring kelp that looked equally promising. Well, in an attempt to keep this write up relatively concise, we ended up being treated to one of those very special days. We found “The Magic Paddy” and with good spirits, good captain and crew, and good focus – we absolutely smashed kelp paddy yellowtail. Drift after drift. Doubles. Triples. Quad hookups. Today was our day and a bad day to be a yellowtail!

To be honest, the best part was just stepping back and taking in those precious moments of bliss as each angler got in on the action. I tallied 3 or maybe 4 fish but was happier to help ensure the rest of the group got the most out of their day. I can confidently say that we all got more than we bargained for, racking up boat limits of nice grade yellowtail. 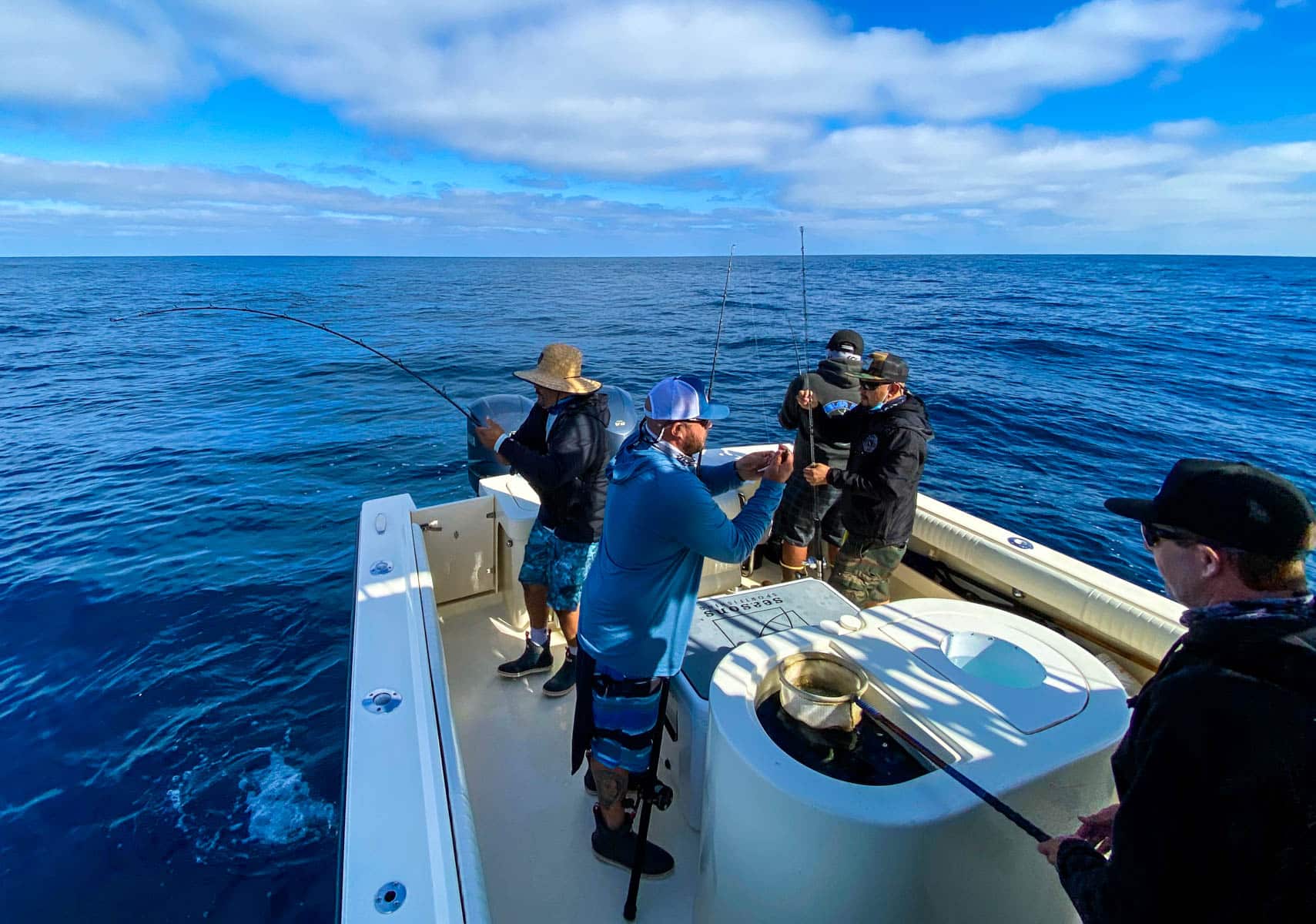 With some time to spare we searched out some additional species, knowing that some mid-grade (60-100-pound) bluefin tuna had been moving through the area. Sure enough, we were able to track down a few spots but in stereotypical fashion, the finicky bluefin that happily responded to chum weren’t interested in biting baited hooks. This was an easy one to chalk up and move past after the day we already had. 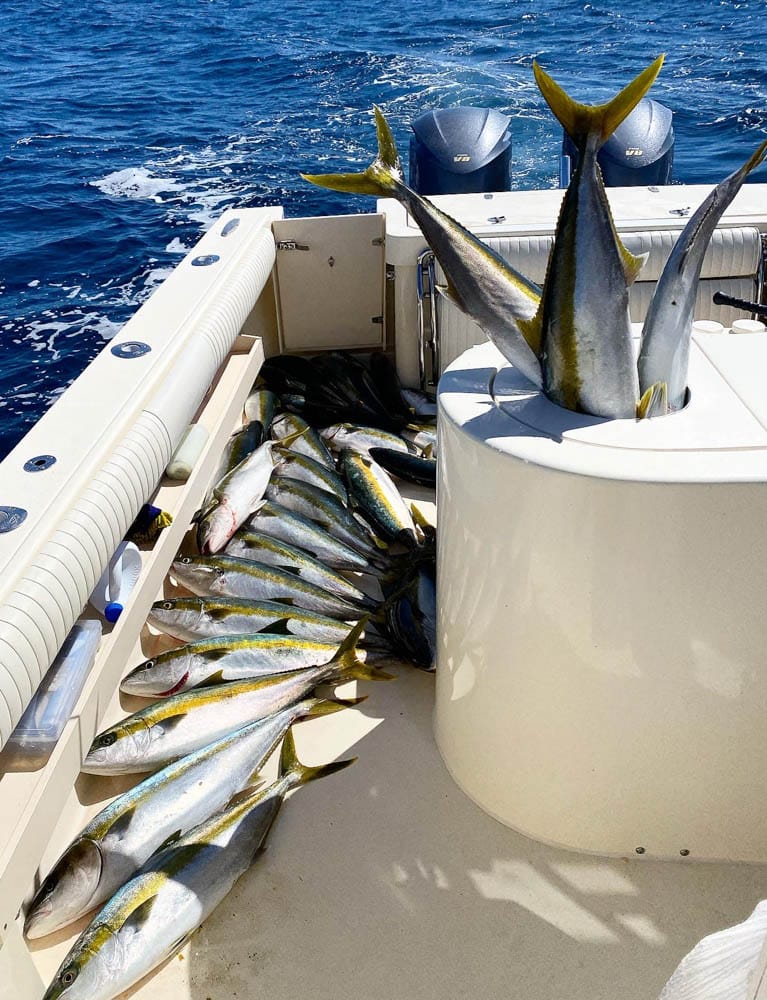 On the ride in I caught myself reflecting on how truly special our day was and also, how unintentionally perfect of a way it was to get reacquainted with our local fishery. Kelp paddy live bait fishing is undoubtedly unique and quintessential Southern California sport fishing. A back to the basics style that year in, year out produces. A staple skillset that if finely honed, will fill the cooler with just about every species that swims through these waters. On top of getting plenty of practice on this technique, I picked up and zeroed in on a few other key lessons from our day. 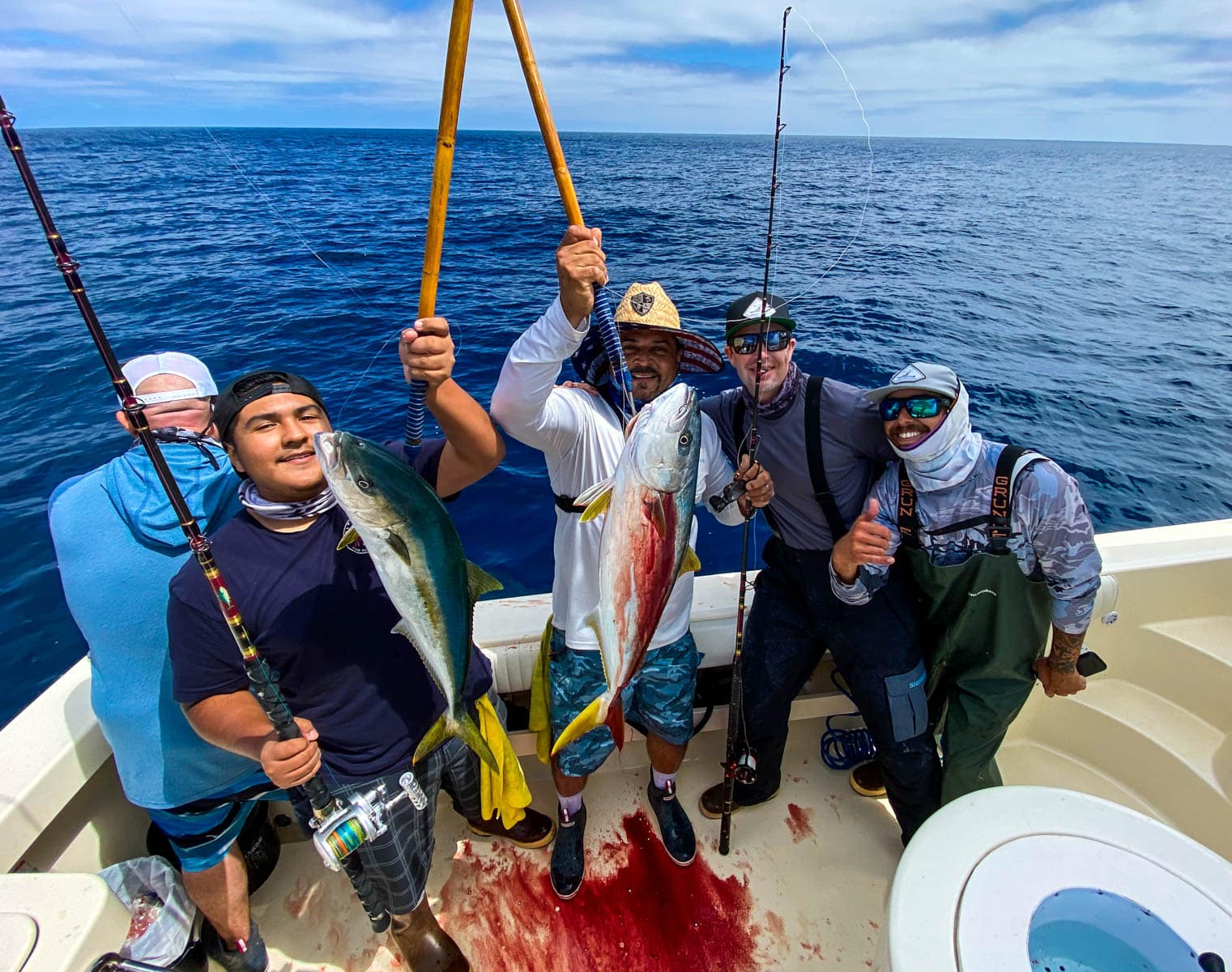 It’s rare and certainly not to be taken for granted the experience we had this day. I’m incredibly thankful to have had the opportunity to be a part of it. An extremely gracious winner in Raul (whose luck seemed to pour over onto this trip), a great group of guys, and an exemplary captain, deck boss, and operation in Seasons was the recipe for an unforgettable fishing trip. The script couldn’t have been written any better for this one and really sparked my excitement for what the rest of the season has in store within my local waters.