It’s often said that every design element of a fishing boat has trade-offs, and that’s true whether you’re talking about a monstrous offshore center console like the Grady-White Canyon 456, or a svelte little fishboat like the Boston Whaler 230 Outrage.

Neither of these boats, however, incorporates a design element that’s become quite popular in recent years: hull steps.

Unfortunately, there’s a lot of misinformation out there about exactly what a step is and how it works. For starters, a notch carved into the side of a hull is not a step, even though you will see plenty of marketing brochures that call a notch a step. True steps run from the notch in the side all the way down to the keel, on both sides. The section of the hull forward of the notch is significantly deeper than the section aft of it.

The idea of a step is not, as it is often described, to create a stream of air bubbles that “breaks adhesion” to the water. On many stepped boats that stream of air bubbles is quite real, however, particularly on poorly designed steps – and in a few cases that has led to some serious issues. Aerated fishfinder transducers that can’t hold bottom on plane are one common side-effect. A worse one that was fairly common in the early 2000’s, when the popularity of steps led a number of builders to try some relatively ill-conceived designs, was blown outboard powerheads. The water they were drawing from their intakes was so aerated, the engines quickly and regularly overheated.

Rather than create bubbles, the goal of designing a step into the bottom of a modern deep V powerboat is to reduce wetted surface (and thus reduce friction) by creating a pocket of air under the boat in an area that would normally be wetted surface. As the boat moves forward the height transition in the hull causes an area of low pressure, behind the step. This creates suction, which pulls in air through the hullside notches and down along the step. As the boat moves faster and faster, the pocket of air behind the step becomes bigger and bigger. Wetted surface goes down, and speed goes up without burning additional fuel. Efficiency boosts of 10 to 15 percent aren’t uncommon, and top-end speeds generally climb by at least several miles per hour. Mission accomplished. Maybe? 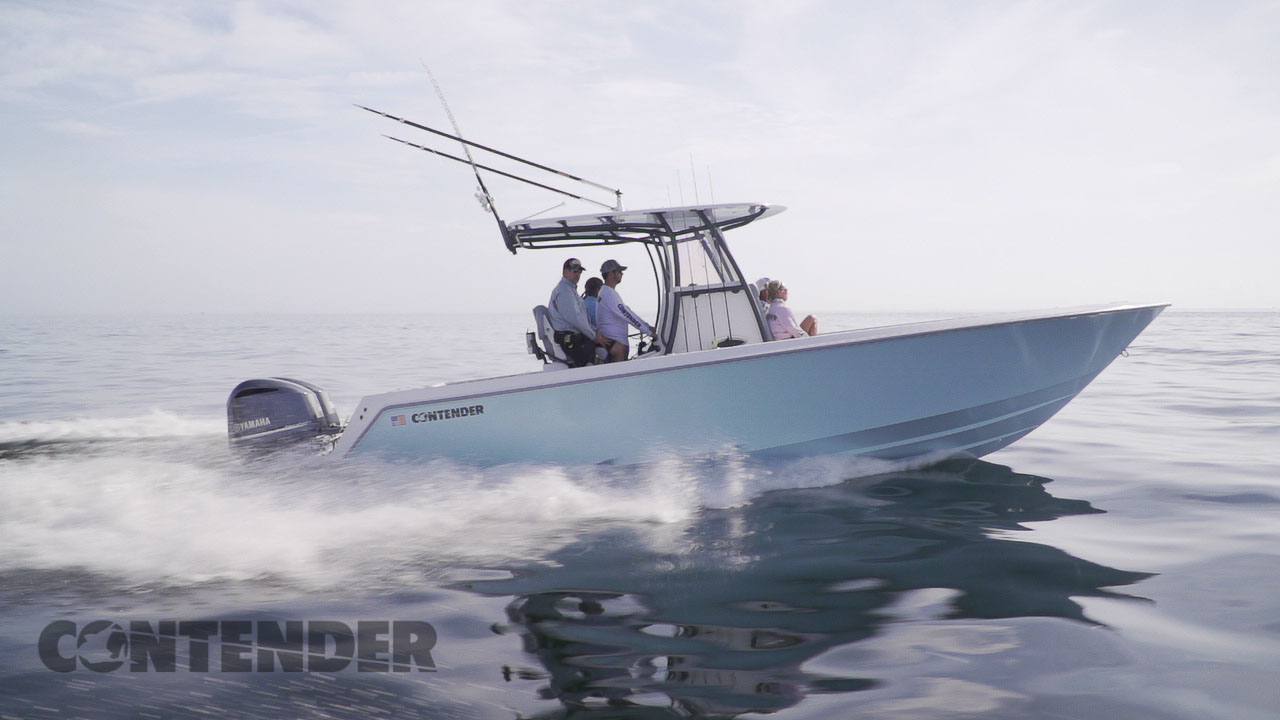 A well-designed step doesn’t negatively affect a boat’s handling; you can crank the wheel hard-over in this Contender 30ST and the hull never loses its grip. In some other boats, however…

The biggest problem with steps is that they have to be designed just right. Perfectly, actually, or there are a number of ill effects beyond those bubble-busters we touched on earlier. A much more dramatic issue comes into play when a boat’s design allows it to heel beyond the hullside notch in turns, in such a way that it creates a vacuum on that side at the same time as the notch grabs the water. The net result is almost like a giant towering above the boat sunk a gaff into its hullside, bringing it to a stop so abruptly and unevenly that the stern of the boat spins out. Not good. Some stepped hulls can also spin out due to operator error. If the outboards are trimmed in too much and the bow gets forced down, you’re essentially creating a lever. Make a hard turn, and again, the boat can spin out. Another problem arises when a boat gets overloaded and the step never rises out of the water, but instead just creates more drag, turbulence, and lot of those pesky air bubbles.

Again, we need to reiterate, most of these problems arise because of inadequate design work. Getting a step just right is tricky – really tricky – but boats with well-designed steps don’t suffer from these issues.

Are Steps Right For You?

So, should you be looking at boats with stepped hulls? That depends on where your priorities lie. Let’s stipulate that every stepped hull and conventional V-bottom you’d be considering is well-designed and executed. In that case, the increased speed and efficiency of the stepped hull is likely a hands-down winner. If, however, you regularly load your boat down with tons of people and gear, you may want to reconsider. Remember that when stepped hulls are overloaded they may actually perform worse than a regular V-hull. You should also take pause if you have other people run your boat often. Inexperience behind the helm (remember the trimming properties) can lead to issues.

Another potential factor is cost. More complex hulls cost more to design, which can translate into a pricier product. Then again, how much cold hard cash will you save in the long term, by running a boat that’s 10 to 15 percent more efficient? Added bonus: stepped hull boats tend to plane at lower speeds than regular V-hulls, so when sudden rough weather pops up you can still maintain an efficient planning speed without beating up yourself and your crew. 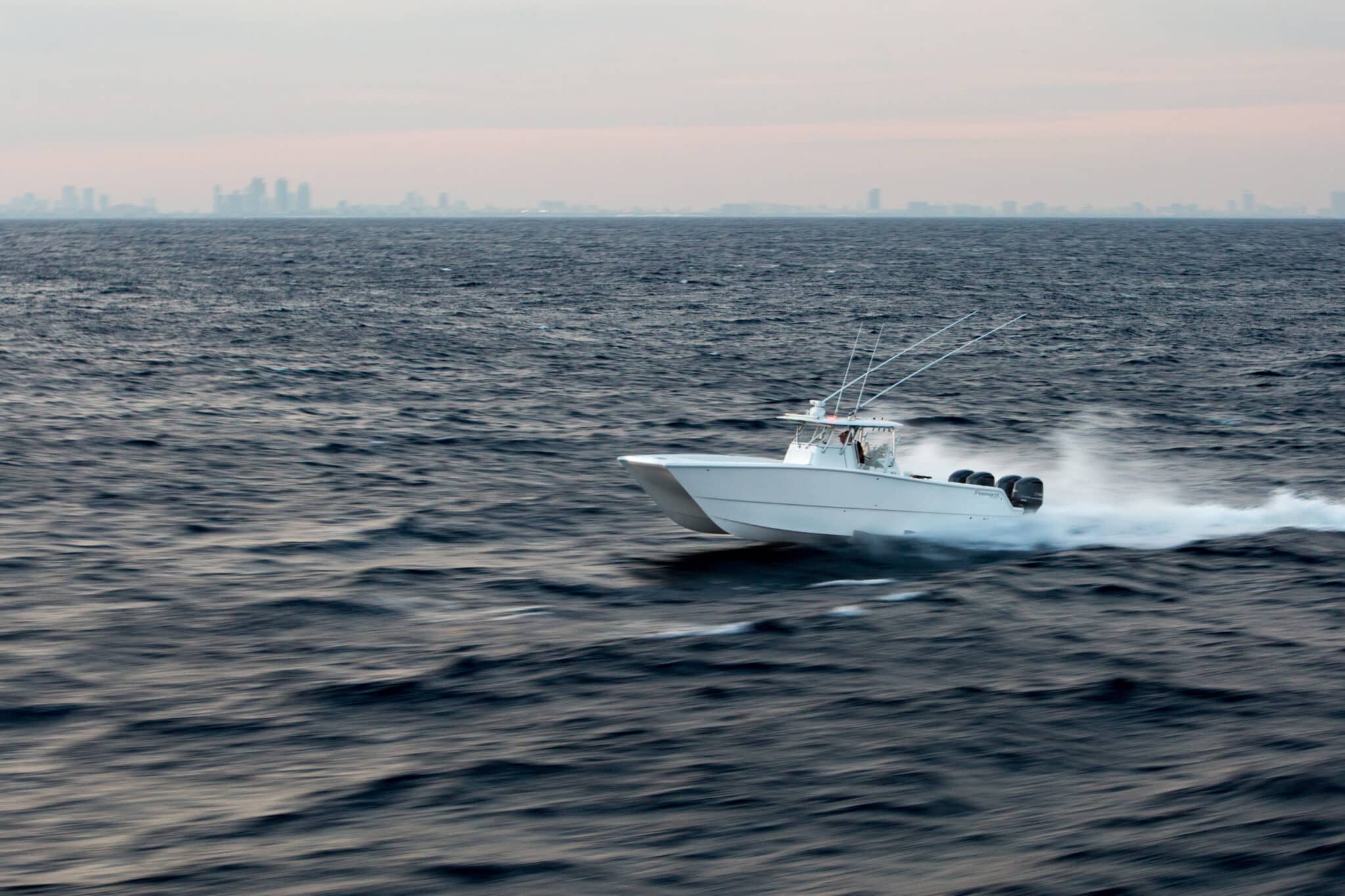 Even some twin-hulled boats, like the Freeman powercats, incorporate steps of a sort in their bottoms.

Again, we’d point out that there are trade-offs involved in every element of boat design. As to whether or not those related to stepped hulls will make any one boat ideal for you, personally, is a judgement call that only you can make.

For a great graphical representation of how a step works, check out Boating Tips: Stepped Hulls, on boats.com.