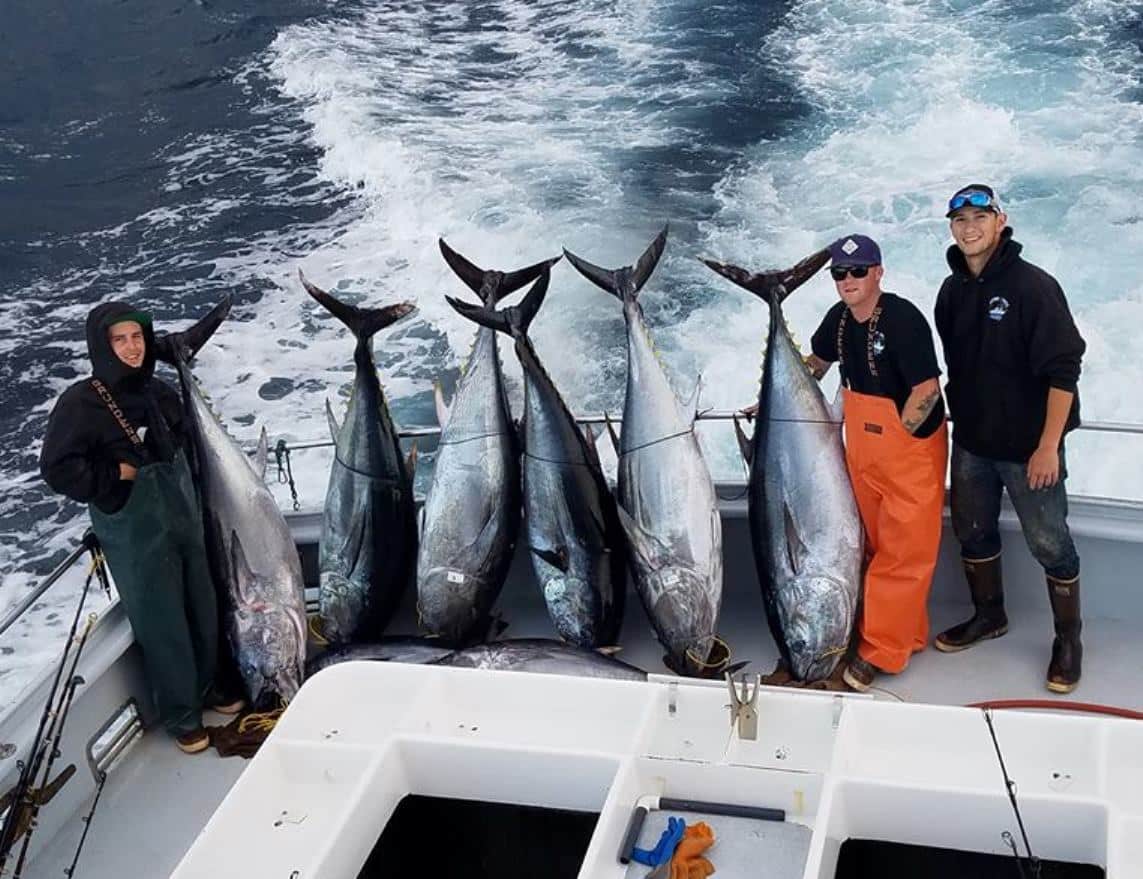 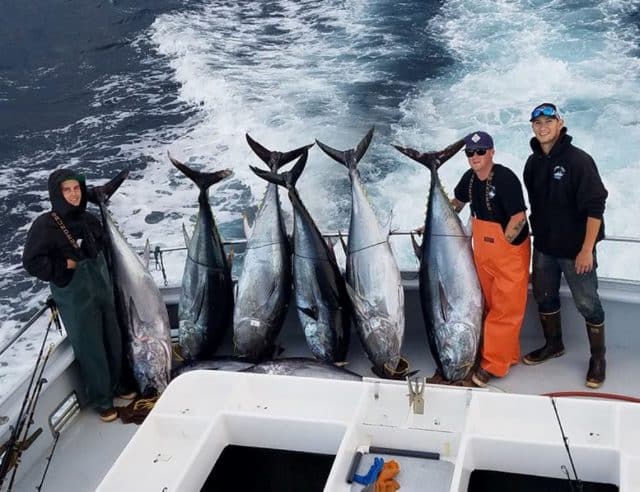 It’s been another good week of fishing in Southern California. From the yellows and seabass at the Channel Islands to big bluefin on the outer banks and the steady yellowtail bite at the Coronado Islands, it seems like everything is biting. But… There is some southeast wind in the weekend’s forecast and depending on how hard it blows, it may make for some tough fishing conditions on Sunday. 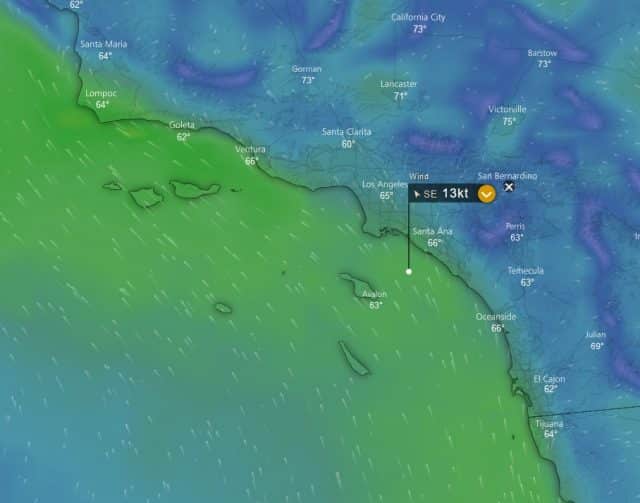 This shot from Windy shows the forecast for Sunday morning at around 10:00 a.m. This is far beyond your average Catalina Eddy counter rotation and its going to affect all waters of the Southern California Bight. While 13 knots of wind doesn’t sound all that bad, it can make for some really difficult fishing conditions and can get hazardous if it blows much harder. I’m going to keep my fingers crossed that it’s an over-forecast but private boaters would do well to keep a close eye on the forecast before heading out. 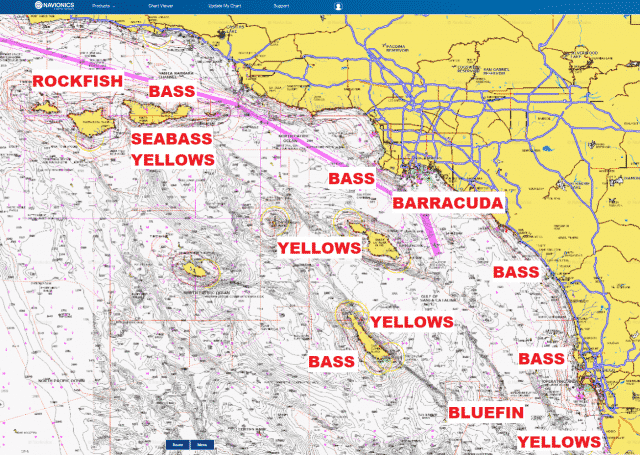 Enough gloom and doom, let’s take a look at the Navionics Fishing Chart and see what our weekend fishing options are for the weekend. The seabass and yellows are still biting for the boats fishing Santa Cruz Island. It sounds like live squid has been the ticket lately but plenty of guys are still catching seabass on red crab colored tube baits. While it’s not a very exciting lure to fish, it does seem to be working when others aren’t so you may want to pick some up if you’re heading out fishing up there. My friend Chris Lilis fished Santa Cruz Island on Saturday and reported wide open bass fishing on hard baits so don’t forget your bass rods. 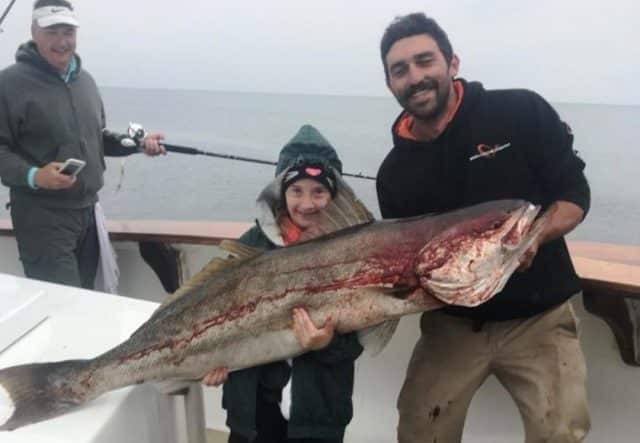 The yellows and bass are still biting well for boats fishing Catalina Island and there is squid to be made and or purchased at the Island. The Fortune out of 22nd Street Landing reported getting this monster seabass this morning that I’d guess came from either Cat or Clemente. The Thunderbird out of Davey’s Locker has been fishing Clemente all week and catching mostly calicos but getting a handful of yellows every day. Both islands look very fishable on Saturday so if you want to head out that’s the day to do it. Also, the Navy has San Clemente wide open over the weekend so there will be room to look around. The steady yellowtail bite on the frontside has slowed down a bit but there are still some yellows biting here and on the backside east end. If you can get squid, I’d definitely take some along.

The barracuda are biting well for boats fishing around the Horseshoe Kelp and there are schools showing up in other places as well. I fished Palos Verdes on Saturday and Monday and saw tons of barracuda up there both days. In some spots they were so thick that we had to drive away from them to catch bass. The fish were a mix of shorts and big ones. There were also some yellows swimming around at Rocky and I got one to boil on the jig but the barracuda were too thick to keep throwing it. If you want to catch cuda your best bet is to jump on a 1/2 day boat out of Long Beach or San Pedro. 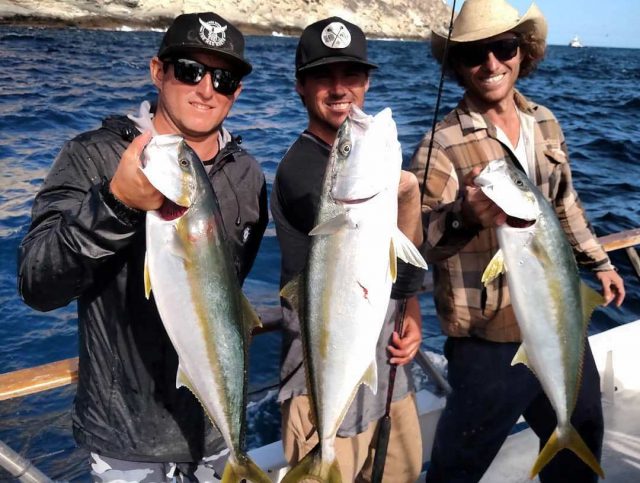 The steady yellowtail bite at the Coronado Islands bust wide open this week and most full day boats reported easy limits on Wednesday, with some catching over 200 fish. The fish in this photo from the Mission Belle indicate the average size of the yellows being caught. They’re not giants but they’re not the “fun sized” ones that were biting earlier this year. The best thing is they’re biting the surface iron, so grab your long rod and get down there.

Finally, the bluefin are still biting for both sport boats and private boaters fishing out of San Diego. There is a mix of fish just below the border and boats are targeting both. The Pacific Queen had limits of bluefin for 24 anglers on Monday’s trip and the majority of those fish were in the 60 to 90-pound range. Other boats are targeting the big boys and having success. The tuna picture at the top of this article is from the Outer Limits whose anglers tallied 6 fish from 150 to 190 pounds on a two-day trip over the weekend. If you want a shot at one of the big boys your best bet is still to charter a 4 pack boat and tell them you want to fly the kite all day. It’s not a sure thing but it’s your best opportunity. 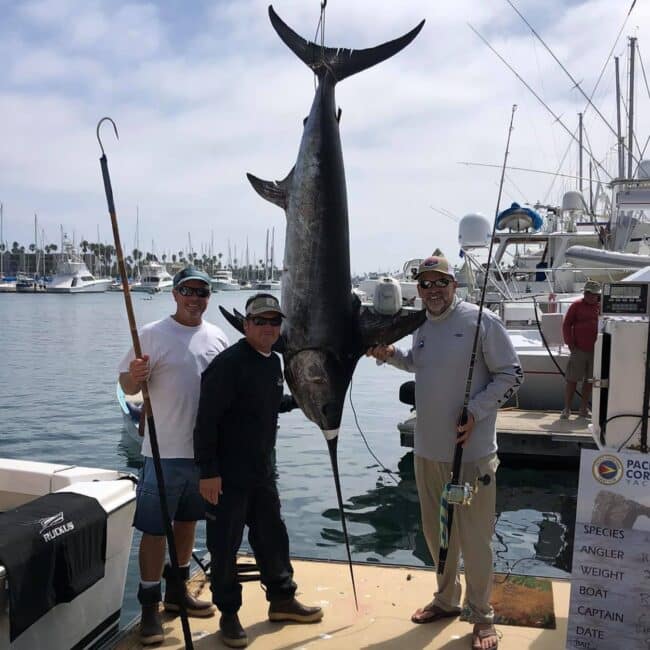