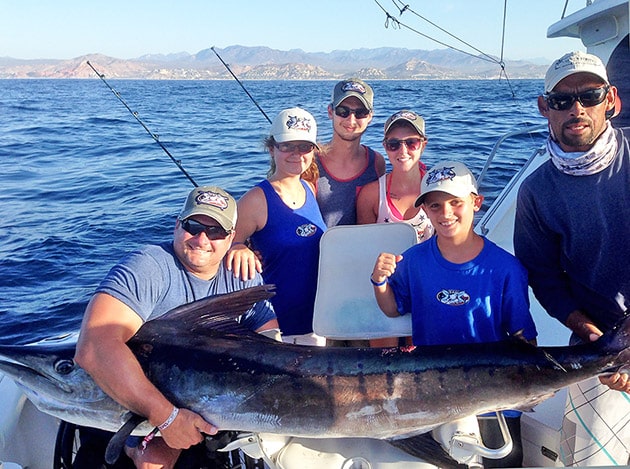 Few tournaments have been as overlooked as the Stars & Stripes. Since my first participation at the event a year ago, when I mentioned the Stars & Stripes Tournament, the usual reaction was a blank look followed by, “What’s that?”

Stars & Stripes was the inspiration of its chairman Dick “Dicko” Gebhard 18 years ago while he was served on the Orange County Big Brothers Big Sisters Board. He became frustrated with the typical, traditional “rubber-chicken” fund raising dinner affairs and suggested to his fellow board members that an “itty bitty fishing tournament” in Cabo San Lucas would be an attractive, yet alternative way to raise lots of money and have fun doing it. So it began with the strong support of a group of his successful Orange County business friends. The event was a hit from the beginning and each year Dicko and his pals applied their “can do” attitude combined with a string of innovations over the years … discarding the bad ones and improving the good ones from year-to-year.

When attendance flattened, someone suggested the addition of a golf tournament and attendance soared again. Another flat spot brought on another division called “Spa” for those who didn’t particularly care for fishing or golf but wanted to join in the fun. Then one of the group mused, “What if we added a concert?” There wasn’t a dissenter in the group. So, one of the best kept secrets in Baja continued to grow over the past 18 years as did the dollars that were raised for the benefit of more and more children’s charities and the many other organizations and individuals that needed some help. This year this unique sportfishing tournament attracted 180-plus anglers who fished aboard 33 tricked out sportfishers. Passengers were picked up and departed from one of the most picturesque bays in Baja – Chileno Public Beach.

As happens most years, this year’s edition of the Stars & Stripes Tournament had many special things happen … the addition of several new sponsors, two of which were: AFTCO, the American Fishing Tackle Company established in 1958 in Newport Beach, California; and Jay “Sparky” Longley of Rainbow® Sandals, who provided a pair of sandals for each participant.

For more than 50 years, the AFTCO name has stood for quality and dependability, backed by Shedd, a family-owned company that ranks among the world’s most highly regarded saltwater fishing tackle and clothing manufacturers.

In keeping with their promise on the AFTCO website, “Your purchase of AFTCO products, either on our website or through one of our many AFTCO retailers, along with your purchase of Guy Harvey or Al Agnew sportswear, contributes to the over $350,000 that AFTCO donates each year to various marine resource conservation and fishing community efforts.”

This year, Bill Shedd, AFTCO’s CEO, agreed to contribute a number of “Special $100 Gift Certificates” to the Stars & Stripes Gold and Blue Pledge Program, along with sponsor Jay “Sparky” Longley of Rainbow® Sandals.

The gifts from both companies were leveraged into a remarkable $125,000 additional dollars through the new “Pledge Program” and added to the year’s total for the many children’s charities Stars & Stripes supports this year.

Founder Gebhard praised Shedd with AFTCO and Longley with Rainbow for their participation in the Gold and Blue Pledge Program and for their willingness to become involved. He saluted them both for becoming the newest contributors to the Sportfishing Tournament and invited both to return again next year.

On October 16, 2010, while conducting Village Stability Operations in Kandahar Province, Afghanistan, Masson stepped on an improvised explosive device (IED) losing extremities to preserve freedom for us.

With the immediate knowledge that he had lost both legs and his dominant arm, he aided his fellow Medical Sergeant and teammates in treating his wounds – actions that clearly saved his life. Masson received the Purple Heart for his injuries and a second Bronze Star for his actions in combat. From Fayetteville, North Carolina, he and his family had been invited by Stars & Stripes organizers to attend the event as an Ambassador of Gary Sinise’s Foundation. In addition to the trip, a “Smart Home” was being built for Masson by the Sinise Foundation for his wife, Dusty; son, Jonathan; daughter, Morgan and son, Ethan, designed to ease the day-to-day challenges they face. The house is scheduled to be completed this November.

He and his entire family were invited to go deep sea fishing on Saturday. When Dicko offered the option of being driven down to Cabo San Lucas and boarding the boat there and running up to Chileno or being carried across the sand to the portable pier and loaded on a cruiser, he replied. “Living on the edge, that’s how we roll,” he replied. “Carry me.”

Asked on the beach the next morning, “Old boat/ new boat?” John was adamant, “Old boat!” Soon the Yahoo, arrived and Mike Hahn and William “Bill” Wagasy skillfully lifted Masson and carried him across the sand onto the portable pier and into the cockpit of the awaiting sportfisher without a hitch. Along with the rest of the family, they soon headed out into the Sea of Cortez in search of fish. “Pretty amazing, a 4:30 wake-up call, being carried to the boat at 7 a.m. Twenty-five minutes later, 10-year-old Ethan was fighting a striped marlin twice as big as he is,”

Masson related later that afternoon. “It took him 45 minutes to catch and release him!”

Meanwhile, Dicko and his assistant Saul who has been with him since he began Stars & Stripes, were monitoring the tournament channel on a portable VHF as they drove back to the Hilton Los Cabos Beach and Golf Resort. Contreras received the report at 7:25 a.m. “When I told ‘El Dicko’ he pulled to the side of the road and wept with joy,” Contreras confided.

The Yahoo spotted other fish and a few hours later, Shea Elledge hooked up another striped marlin, which she fought for awhile before it came off the hook. Later, she commented that it was the largest fish she had ever fought and she couldn’t believe how hard it pulled. When they returned to the Hilton, Gebhard greeted them, grinning from ear to ear, bouncing with excitement and hugging Masson in delight.

Another very excited young man that same morning was 15-year-old Dominic Aberl and his mom Megan, also one of the Stars and Stripes Angel Flight families. They were headed out on a sportfishing adventure as well.

In 2011, Dominic Aberl was diagnosed with Ewing’s Sarcoma, a small, round, malignant blue cell tumor found in his bone tissue. Since diagnosed, every month Dominic moves into the hospital for ten days as chemotherapy drugs attack his body in an effort to rid him of the cancer cells that have changed his life.

The morning he and his mom boarded their boat, the “Hurricane,” he had no idea that his life would be changed again in a positive way thanks to Miracles for Kids and Stars and Stripes. Not only was it the first time that he and his mom would fish on the legendary Sea of Cortez, but also it was the first time that they would fish from a boat. Megan had prayed that the fish would bite, while Dominic kept his fingers crossed in hopes of having a chance to catch a fish on the trip. The big fishing lures bubbled in the wake behind the boat as the captain and mate searched for the fish. Suddenly the Hurricane turned as the Captain headed for birds circling high in the sky. Beneath the birds, a dorsal fin suddenly appeared behind the closest lure. A few seconds later it disappeared beneath the surface and the clicker on the big reel clattered. Dominic, already in the chair, listened intently to the mate who gave him instructions as they watched the fish speed away. “Reel now, wait, reel faster!” the mate instructed, while Megan proudly watched her young son play tug o’ war with a fish that was longer than Dominic was tall. Although it seemed much longer, in 13 minutes the tired sailfish was at the side of the boat. The mate removed the hook with the captain’s help, and in one fluid motion the sailfish was in Dominic’s lap for Megan to photograph before it was set free. But Dominic wasn’t finished. A larger, stronger striped marlin was next in line … jumping time after time before Dominic finally battled it to the stern of the boat. His smile, as bright as the stripes on the marlin, told the story as his mom once again clicked away. The weary duo trolled back toward shore, but the prayer and crossed fingers worked their charm once again and the young angler landed a dorado. Thankfully, it was smaller.

That day Dominic put the hospital and chemotherapy behind him.

He brought in two billfish and a dorado on the same day … a feat that many of his adult counterparts would admire and of course, envy.

Since 2012, with a Grant Program provided by Miracles for Kids, one of Stars and Stripes’ partners, Megan has been able to house her family and provide them with the stability and comfort that they need. Another son, Andrew, has settled into a new high school, and Dominic now has a place to call home when he returns from the hospital. With some of the financial pressure alleviated, she can focus her energy on caring for her family.

On Saturday night, the finale was held on the huge beach in front of the Hilton Hotel. A wooden floor the size of a football field sprawled out in front of a full-blown concert stage two stories high, with 62 tables covered with gleaming white table cloths, complete with decorations and special party favors at each place settings. A towering stage was festooned in more sparkling lights and strobes than a small cruise ship. The night was reserved for special thank-you’s speeches and patting all the participants and volunteers on the backs for their efforts and contributions. When the final tally was in, $2.7 million dollars, an event record, pushed the Stars and Stripes total way The announcement was followed by a rousing concert by Gary Sinise and the Lt. Dan Band that had everyone rocking in the aisles and crowding the sand dance area in front of the impressively adorned stage. It was well into the night before the starry sky was splashed with a remarkable fireworks extravaganza for a fiery stamp of approval. Saturday night seemed like the finale and celebration of what had been accomplished with the 18th edition of the event. Yet, early Sunday morning, a large group gathered for just one more added project; the assembly of 75 brand new bicycles, which had been shipped to the tournament in large wooden crates. Volunteers, celebrities, guests, staff and local dignitaries all pitched in to assemble the bikes.

Once completed, they were presented to the anxiously awaiting youngsters and the smiling helmeted young bikers lined up for the start of a celebratory ride down one of the main streets of Cabo San Lucas.

This final act brought the 18th Annual Stars and Stripes event which included fishing, golf and a music festival to a close. Once again, it had lived up to its reputation as a “feel good” event, setting a new record raising $2.7 million, elevating the 18-year total of $20 million plus– more than any other sportfishing-based charity tournament in the world!

Thanks to the hundreds of volunteers, sponsors and attendees who continue to help make the event a success year after year and who allow the organizations it supports to make a difference in the lives of hundreds of thousands of children through six major youth-related charities — Big Brothers Big Sisters of Orange County, Building Baja’s Future, CASA (Court Appointed Special Advocates), The Gary Sinise Foundation, Miracles for Kids and Orangewood Children’s Foundation.