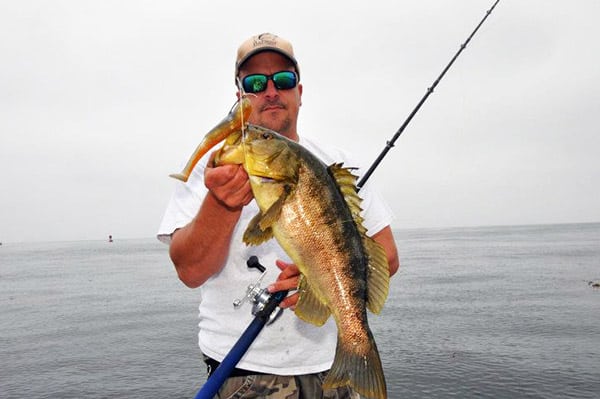 There’s really not much to report in the way of fishing this week as the wind has been blowing almost non-stop since Sunday. While the weather is looking better for the weekend, the water is going to be rolled over in most area and surface temps will be a lot lower than they were before the wind. This cooling is going to have a significant effect on surface fishing, but shouldn’t hamper the rockfish bite. So, if you’re planning to fish this weekend, rockfish are your best bet. Despite the bad weather, I’m excited about this being Grand Prix weekend in Long Beach as the fish usually kick into their springtime bite mode in the following weeks.

Within the next month, the barracuda should start showing up in the fish counts.

It’s always a crapshoot as to where these early season fish will pop up first. But based on the amount of bait outside of Long Beach and in the Santa Monica Bay, I’d bet they’re going to show up in those areas first this year. These early season fish are usually found in deep water by one of the 3/4-day boats running to Catalina and will be targeted by sport boats chasing bird schools or sonar marks. There is plenty of bait on the beach from Newport to Santa Monica, so the fish should settle in and bite for a while this year; unlike recent years where they came and left in less than a week. Around this same time, the calico and sand bass fishing will also improve as the bass begin to fatten up for their summer time spawn. Bass fishing tends to be very sensitive to temperature swings during the spring and any significant and sudden drop or increase in temperature can give the fish lockjaw for a few days. As spring turns to summer the bass will begin their transition into spawning mode. For sand bass this means moving away from the structure spots where they spent the rest of the year and heading over to hard bottom areas around the flats to stage with other sand bass in preparation of spawning. If the warm water temps we’ve experienced all winter are any indication, we should have a stronger spawn this season as more fish push into the northern spawning areas off Huntington Beach, Santa Monica and Ventura. As the sand bass are moving to the flats, the calicos will be piling up on the deep-water edges of the kelp beds in their spawning aggregations. This makes them prime targets for sport boats anchoring on the edge of the kelp or private boaters working kelp edges with swimbaits. The same warm water that will make the sand bass bite improve will kill off a lot of the kelp that’s along our coast and at the islands. This lack of kelp will condense the calicos into the smaller beds and make them easier to target. But once the water gets too warm, the fish will often move deeper in the water column and become harder to catch.

Right around the time that the bass spawn, tuna and yellowtail should start showing up under kelp paddies in the waters off San Diego. If it is a warm water year, there probably won’t be any albacore and less bluefin than we’ve had in the last few years.

But there will likely be plenty of yellowfin tuna and dorado to fill the void. The offshore fishing should improve throughout August and peak right around the time that the kid’s go back to school. Post Labor Day; there might be some bigeye tuna in the mix and more marlin moving into our local waters. If this El Nino that everyone’s been talking about actually comes together, the fishing might be incredible this fall and through next year. But even if it doesn’t there will still be plenty of shots at good fishing this season.

So, let’s keep our fingers crossed that the wind doesn’t blow too hard or too often this spring; and let’s get ready for another great year of fishing.