The Sportsman Masters 267 OE is one beefy bay boat that’s designed and built with the attitude of a serious piscatorial predator.

I’m walking down the docks looking at a line-up of seven new center console fishing boats one after the next when I spot it.

Stop! Hold on, wait a sec, and just a moment.

What is this fine creature of carnage bobbing around in slip number eight? I see Sportsman printed on the side, but this bay boat looks different from Sportsman’s current bay boat models. Then I find the rep and learn the back-story: this is a prototype, hull number-one of a new model dubbed the Masters 267 OE.

We get on the boat, motor out into the bay, and nail the throttle on the single Yamaha F425 XTO Offshore outboard.  In a matter of seconds, we’re screaming across the chop at over 56 mph (though the Yamaha techs on the scene managed to wring 60.2 mph out of this rig on calm water with two fewer people aboard). With the rpm set to a reasonable 4500, we maintain a 43.5 mph cruise. For those of us interested in bay boats that can handle blue water, that’s an important number to pay attention to. Obviously, everyone likes going fast, but offshore runs can make for a very long haul at more timid speeds. And since the boat gets 2.2 mph at that cruise, the range is well over 200 miles. 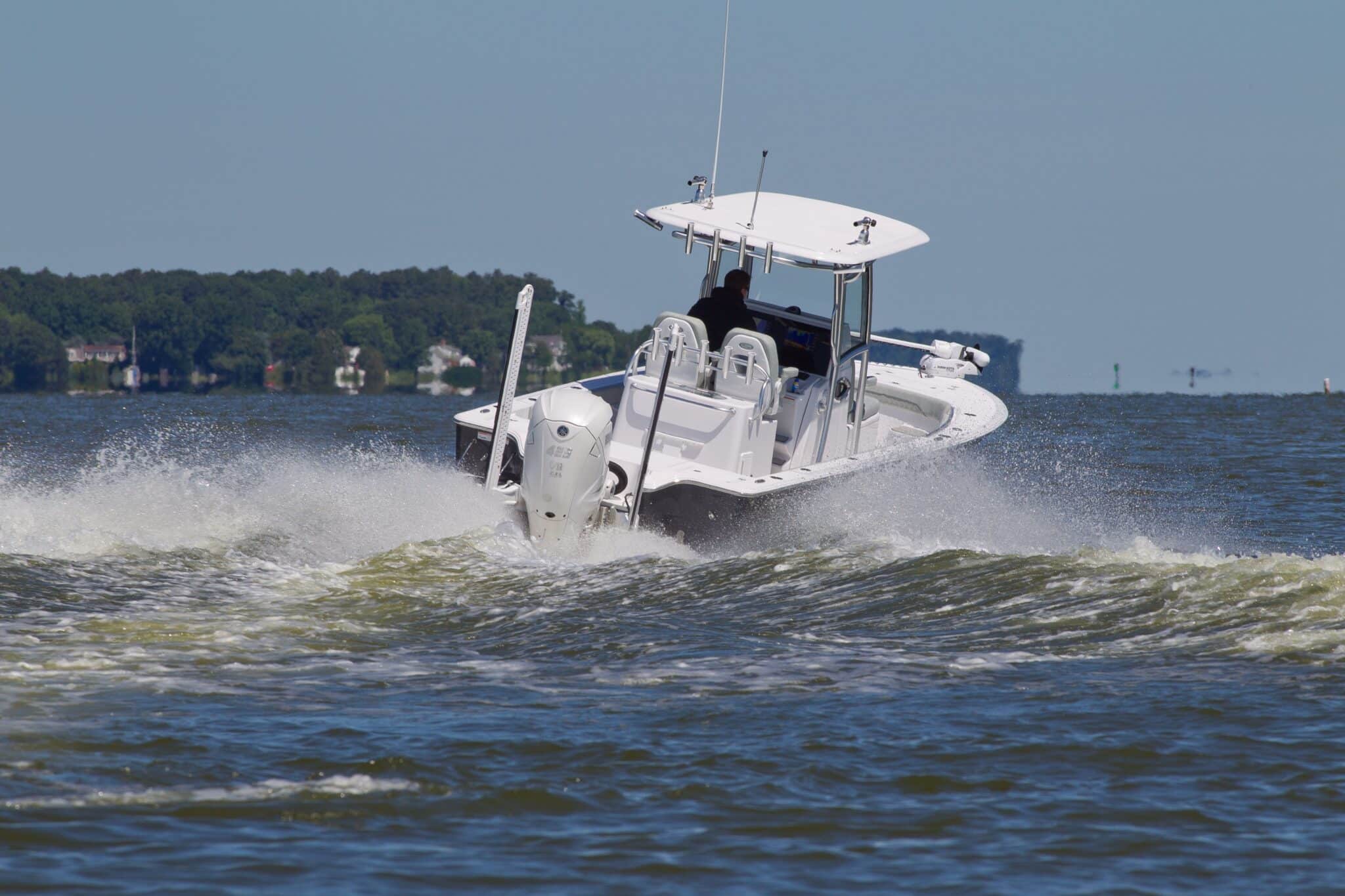 The single Yamaha F425 provides rather stellar performance. Sportsman also plans to offer the boat with 300 or 350 horses, but since none of these rigs have hit the water just yet we can’t comment on the performance differences.

We didn’t have the opportunity to charge through an inlet in this boat, but we did get the chance to blast through the Chesapeake in a stiff 15-knot breeze that created a tight, vertical, bash-your-brains-in style chop – and we felt the 267 OE handled it far better than the average bay boat. True, the hull only has 16 degrees of transom deadrise and you need to work the trim to make sure the sharp entry is slicing open the waves. Do so, however, and the hull performs admirably. And remember, that moderate deadrise is a must-have for a bay boat – note that the Sportsman enjoys excellent lateral stability, and can float in a mere 15-inches of water. 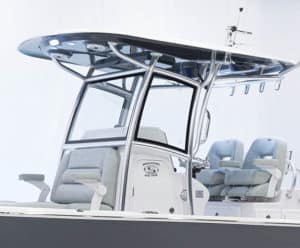 Those skinny-water applications are another area where this rig will shine. The aft elevated casting deck houses not one but two 21-gallon livewells, one of which has air-injection, plus a centered bench seat that swings open. Live bait nuts will love that there’s a third livewell (this one 32-gallons) in the leaning post, which also sports four rocket launchers. A 32-gallon in-deck fishbox rounds out the cockpits’ fishing features. But if you get the chance to fish on this boat, elbow your way right up to the bow. This is where the Masters 267 OE differs dramatically from the existing Masters 267. The bowdeck doesn’t have an elevated casting platform with those long, cushy loungers with backrests, and instead features a foredeck with an anchor locker, a forward fishbox, and two steps up that house an eight-gallon livewell (four livewells on one fishboat!) on one side and a drink box on the other. In front of the console, rather than find a compact seat you’ll see a coffin box with a lounger built on top – it’s almost as though Sportsman took the coffin box right out of their 28-foot TE center console, and mated it to their bay boat line.

In a nutshell, the OE shifts around and trades in some of the “family-friendly” features and the inshore perks of an elevated forward casting platform for big-water fish-killing advantages. And truth be told, during the short fishing trip we had after our boat test, we found casting from the bow perfectly comfortable and quite effective. (Would we be out of line to note that the lone angler aboard with BD cred caught three stripers, while those without caught just one fish combined?)

One more thing we’ve got to call out: the hardtop. This part isn’t particularly new for Sportsman, but it’s too well-designed and constructed to pass by without comment. It’s as stout as they come, incorporates a tempered glass windshield, stereo speakers, courtesy and spreader lights, and a radio box – and all are integrated into the top itself. It also carries a rack of four rocket launchers plus a pair of kingfish-style angled rod holders.

Put all these features together, and you get a bay boat that’s clearly capable of fishing far outside of the bay. You’ll also get stopped in your tracks, the first time you see one at the dock.