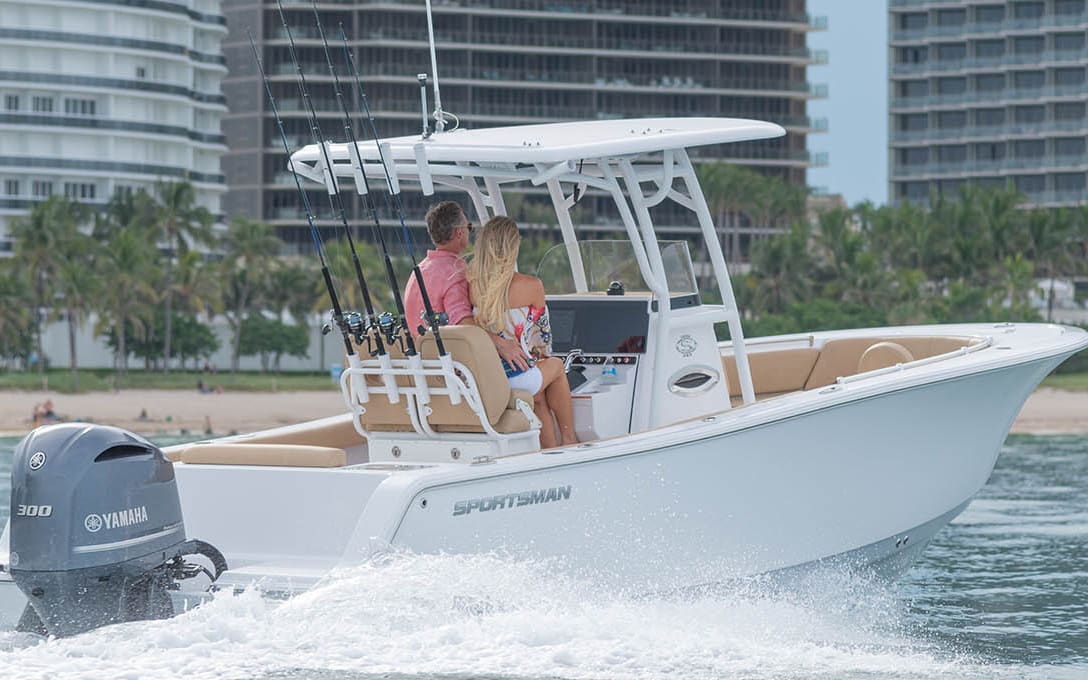 The Sportsman 242 CC comes equipped with just about everything you need and want – right out of the box.

Checking out the Sportsman 242 CC is like a breath of fresh air for anyone who’s gone shopping for a new center console fishing boat within the past few decades. The reason why is simple: it’s a straightforward fishing machine with a comprehensive list of standard features and a transparent price tag. Sportsman equips the boat to the teeth right out of the box, and doesn’t try to obscure the real-world cost by publishing an MSRP that fails to include “optional” items like gunwale-mounted rodholders, or say, a steering wheel. (Yes, we have seriously seen that listed as a cost-adding “option” in at least one case.)

Let’s start with that pricing. Unlike many builders Sportsman states up-front that they have “full disclosure” pricing on their web site, along with a boat customizer feature that lets you change powerplants and add features with the corresponding costs right there for you to see. In the case of the 242 CC, that means an “Internet Price” starting at $79,465.

Thank you, Sportsman, for not beating around the bush.

Wait a sec – does the base boat really have everything you need? Can you merely squirt some fuel into the tank, splash the boat, and go fishing? Amazingly, yes. Here’s a sampling of fishing features that are included: Four gunwale holders; a hard-top with four launchers and two angled “kingfish” holders, an electronics box, and spreader lights; a 25-gallon transom livewell with high-speed pick-up; coaming bolsters; cockpit toe-rails; a raw water washdown; and under-gunwale rodracks. Even a set of fish-attracting underwater lights are standard features. 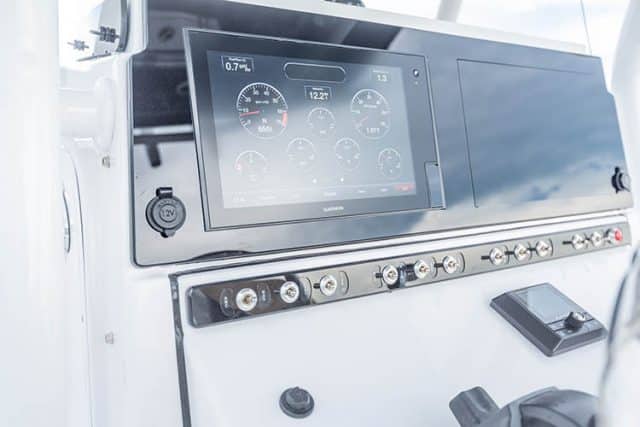 Shockingly, there are also some high-end electronics are included on the stock boat: a 12-inch Garmin GPSMAP 1242xsv Touch MFD with an Airmar B60 through-hull transducer; a Garmin VHF 110; and a JL Audio MediaMaster MM50 eight-speaker stereo system.

When’s the last time you saw all these angling accouterments included on a standards list? Like, never?

Beyond the fishing-oriented items there are plenty of comfort perks and other features included on the boat, but there’s no reason to take up a bunch of space here listing everything out. You can see it all for yourself, at Sportsman’s web site. But, what’s left that you might need to add? Offshore guys will want the outriggers, for sure, and there are a couple different leaning post arrangements to choose from. But that’s about it as far as the must-haves go.

This can shift pricing by around $3,000, and performance by a few mph at cruise and top-end. With the F300, you’ll be looking at a 4500 rpm cruise in the mid-30’s while getting around 2.4 mpg. Most efficient cruise is in the low 20’s with a mpg of close to 3.4 mpg. And at the other end of the spectrum, wide-open throttle will have you nipping at the 50-mph mark while getting a hair less than two mpg.

So far as layout goes, the 242 CC is not unusual. It has a fold-away transom bench seat, flanking bow seats with insulated stowage compartments built in, and an integrated cooler seat in front of the console. We’d like to see a retention strap added to the flip-up cooler seat to relive potential stress on the hinges, when its opened. There’s another stowage compartment in the foredeck, and depending on which leaning post arrangement you opt for, this can vary between a cooler or tackle stowage. Like most boats of this nature the console houses a head compartment.

A few other key features to note: the forward seats have removable backrests, which are awesome from the comfort perspective though they can be difficult to stow. Low-profile grab rails run up both sides of the bow cockpit, so there’s always a convenient handhold up there, too. And the hard top actually incorporates misters. If you’ve ever experienced having misters on a blazing-hot, dead-calm August afternoon, you know that they can be a life-saver. Finally, the entire boat is upholstered in SoftTouch marine vinyl. This is top-shelf stuff, which is in fact soft to the touch, but also remains supple in a wide range of temperatures and is highly resistant to water, mildew, UV rays, and petroleum products.

If you’re sick and tired of probing the Internets and wandering boat shows with a calculator in one hand and a notepad in the other while you try to discover the “real” pricing of a boat with the add-on features you want, you’ll love checking out the Sportsman. More importantly, you’re likely to love what you discover about the boat itself, too. 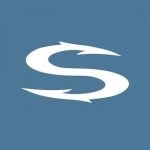 Get more boat reviews from Lenny Rudow on BD.