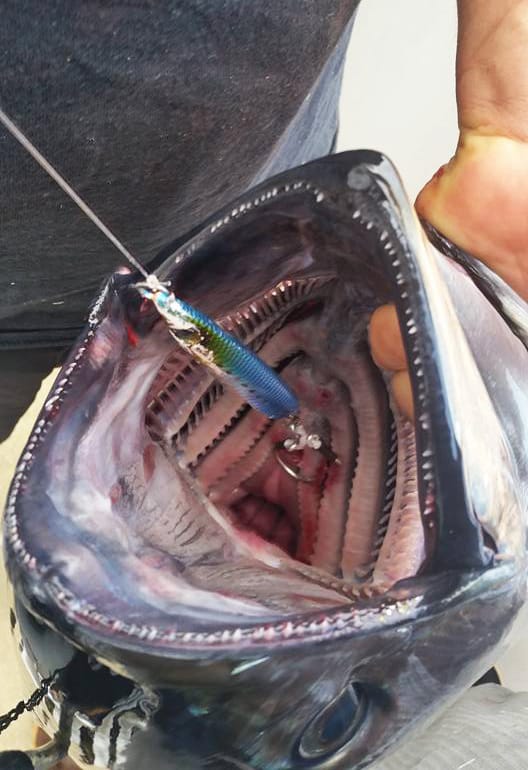 When I wrote the article earlier this week (Entitlement, Expectation, & Education), there was a line in there that was a comment Capt. Alex Edwards of the Constitution had given me from one of his recent clients, “I don’t want to catch anymore yellowfin. Can we catch something else?”

I used the comment as an example of the sense of entitlement I’m hearing from some of the El Nino anglers out on the boats these days. It got me thinking though…what if that were me? The fishing has been so good at times recently that it isn’t unheard of to find yourself with a quick limit (Mexican) of 5 yellowfin tuna. My buddy, Capt. John Anjard, has been working 2nd ticket on the Dominator this season. He was telling me about a recent trip where a passenger used the easy limit scenario to challenge himself to catch a limit 4 different ways: on bait, Shimano Flatfall, Shimano Colt Sniper and on the popper. That’s a cool accomplishment, but what if everyone on the boat was having an easy time of it and you did want to try for something else. What could you do? Here are a couple tactics you might want to try to change the game.

The standard boat recommendation of late has been the following…30-pound mono bait setup, 2/0 circle hook, and pin on an anchovy. The yellowfin have really been keyed in on the small bait. The typical scenario of late is to stop and drift a paddy. Immediately under the paddy are going to be your rat yellows. As you drift a little further out, the yellowfin come into play. Then sprinkled into the mix will be your dorado.

So let’s say the paddy was jugged full of yellowfin and you had 5 YFT tagged and dropped into the hold. Now what? While the yellowfin have often been the smaller grade fish, these late season dorado have been the larger model fish. We saw that 60-pounder a couple weeks ago. If you wanted to target dodo, you could not only add a couple more fish to your take home haul, you could also put yourself in a better position to take the jackpot. How could you do that? John said the dodo are more into the bigger bait, so you could go sardine instead of anchovy. There also might be the odd mackerel in the bait mix. With the yellowfin keyed in on the small bait, that mack might be sitting in the handwell lonesome and waiting for someone to give it some love. Have a deckhand slab it for you. Change out your hook to a bigger one, say 4/0 or 5/0, pin on that slab and hang on. That big bull jackpot dodo might be in your future. If it happens, be sure to get that trophy shot as soon as you get it on boat (and subdue it) as the color is going to be at its most brilliant at that point in time.

Go For The Hail Mary

A recent and very welcome development on the water has been the appearance of wahoo. Seems like everyone is getting one these days! (sarcasm) My buddy, Jason Levine, just got one yesterday on a private boat launching out of Dana Point. I believe all the fish I’ve seen this year have come on the troll. I’m hearing reports though of wahoo in the mix around the kelp paddies.

Have this rig ready…50-pound mono, to a heavy swivel, to about a 15-20” wire leader, to a wahoo bomb type jig. Another good jig would be heavy iron (like a Salas 6x or 6x Jr) in contrasting colors (black and hot pink is a good choice) with a big single Siwash style hook instead of the standard treble. Something I didn’t know about wahoo that John clued me into is that typically they school deeper below the paddy.

If you see a hooked fish come back with its bottom half sawed off, don’t assume it was a shark.

If the bite is clean, chances are there are wahoo in the area. Drop in and fish your jig yo-yo style. You want a reel that is fast (40 inches per crank or more). Let if fall say 60-80-feet and then grind it back in as fast as you can. If you get bit, DON’T SET, wind your way through. I’m told that wahoo like to bite a bait mid-body. By winding through, hopefully you can pull your hook into their jaw.

This season has been fantastic and it continues to be great out there on the water. I hope you get out and make the most of it. Tight lines!