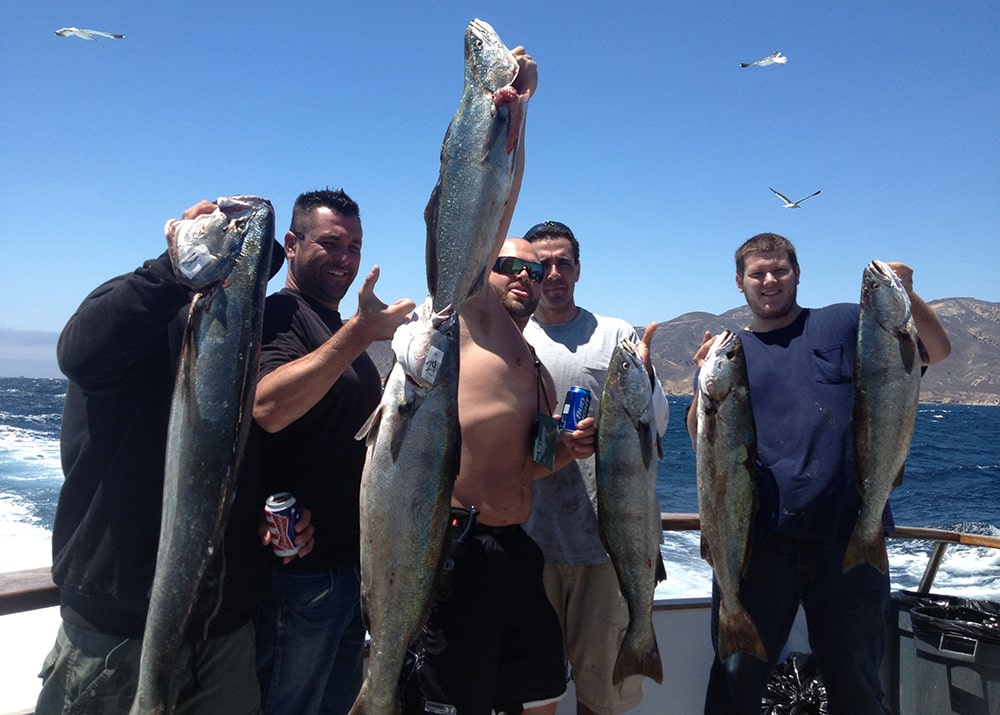 White seabass…the elusive ghost. Of all the major gamefish we fish for here in Southern California, white seabass is that one fish that seems to elude even the saltiest anglers we know. The problem is that even in a good seabass year, it’s hard (especially in a sportboat scenario) to target this fish. One of the really frustrating things about white seabass is that even when conditions are perfect for the sporties to target them (a squid spawn primarily), there are times when they just won’t bite. Other times, it’s so easy, it seems like they just want to die.

I remember a trip on the Pacific Islander in July of 2014. Two weeks prior we went out looking for them. Nada. It turned into a rockfish trip. Same trip 2 weeks later, I came with no expectations. I was cozy in my bunk, not in a hurry to get on deck. Deckhand Bryan Duncan came and woke me up. “Dude, get up. There’s seabass.” Really? I stumbled out on deck and baited up. There was an open spot on the rail and I dropped in. I was waiting for my weight to hit bottom and BOOM! Guy next to me is bit. Oh yeah? My weight hits bottom (high dropper setup) and just like that, I am too. Long story short…by 9am we were limited out at 3 fish a piece, and still had time to go out and get limits of rockfish.

Conversely, I’ve been on trips where we were definitely on top of fish and they just didn’t want to go. Failed trip, go home, and the next day it’s limits again. Very frustrating. It’s said that the best time to catch white seabass, is when you aren’t fishing for them. Absolutely. I’ve been the beneficiary of a surprise seabass on a couple occasions and it’s the best feeling to score a biscuit while fishing for say yellowtail or calicos. 2015 as we all know was a warm water year. Squid are scarce when the water is too warm. Some seabass got caught last year, but the overall sportboat numbers were really down. I wasn’t one of the lucky ones. I think that seabass were still around. It was just hard to target them without the squid for them to aggregate around. There was about a week where the bite was on like in past years up in the 805, but that was it…one week. I rode the New Seaforth a few times during January and February last year. They had about a 2 week run where they were picking off 1’s and 2’s every other day. I was on one of those rides and saw some get caught.

My point is that most of us probably haven’t fished for white seabass in awhile.

Happily, we are starting to see some squid again. Lo and behold, we’re seeing some white seabass back in the counts. To put it in perspective, I wouldn’t call it a “bite” but the opportunity is there. I plan to ride the Redondo Special on Monday. They’re currently on a Winter Schedule running 9am to 2pm Wed-Fri and then a normal 7:30am and 1pm run on the weekends.

They’re running this coming Monday, January 18th, 9am to 2pm for the Martin Luther King holiday. I plan to join them. If you plan to join me, here are some pointers to remember.

Basic Rigs and When To Use Them

There are 2 basic rigs for white seabass: the high dropper loop and a lighter setup using either a leadhead or slider. A third rig using a floater or balloon is common, but not in a sportboat scenario. Essentially, you want to match the rig to where the captain is saying they are marking fish. If the marks are on the bottom, dropper loop. If they are midway in the water column, then the light setup. Depending on the current and where the fish are marking will determine how heavy of a leadhead or slider to use.

The go to hook, popularized by Brandon Hayward, is the Owner Aki Twist, but in general you want to use a hook with a longer shank to hold the squid better. Size of the hook is determined by the size of the bait, but in general 2/0 to maybe 6/0 is the range you’ll use. The majority of time that I see someone get bit and lose the fish, the reason why will be that their drag is set too tight. It takes awhile for these fish to really commit to the bite and if your drag is set too tight, you’ll pull the hook before you even know what happened. That’s why I personally like to use a star drag reel. You can set the drag real low to accommodate the soft initial bite, and then tighten down after you’ve survived that critical first run.

There’s a lot more that can be written on this topic. Definitely listen to what the crews are telling you, but this information will ensure that you show up with the right gear to give you the best opportunity for success. Good luck!