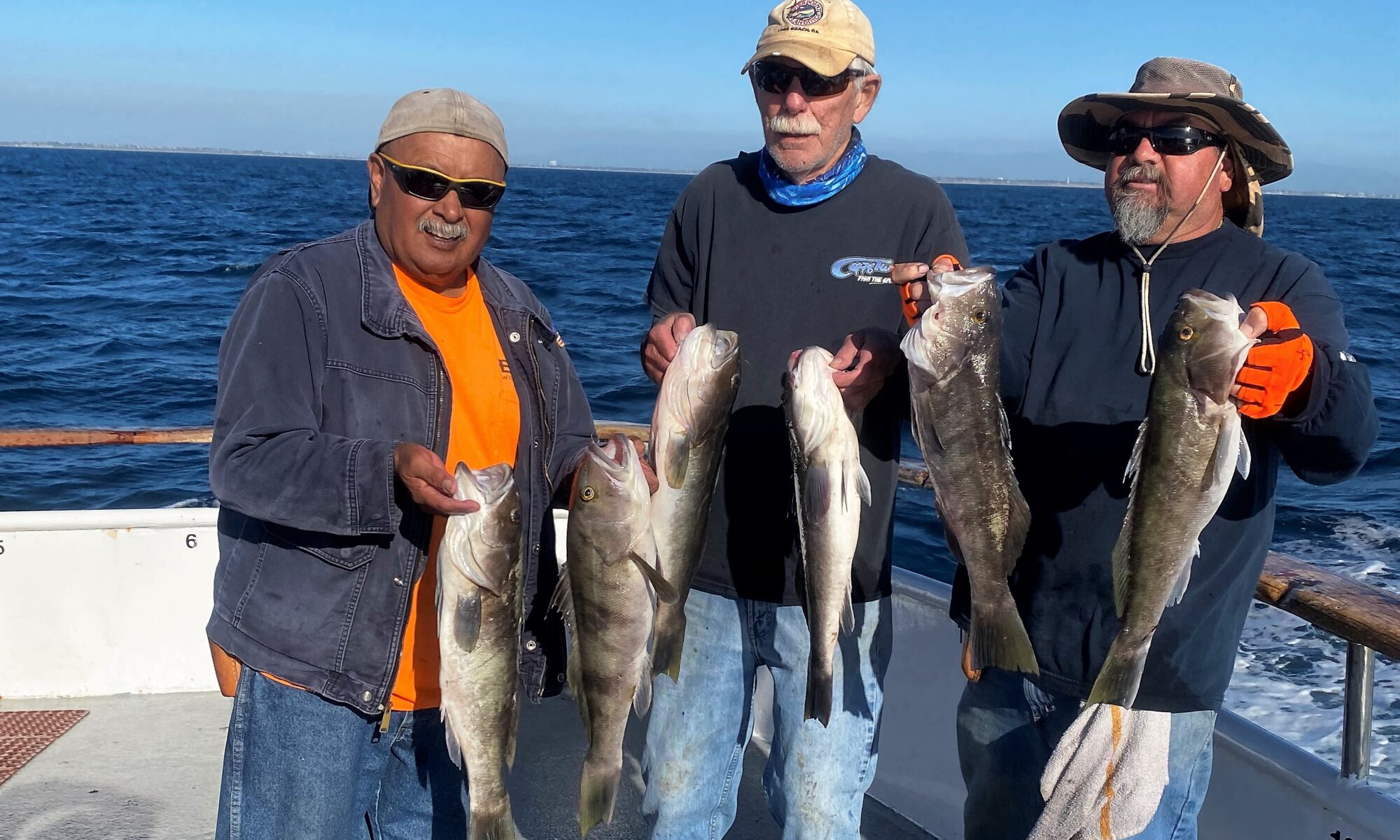 Just another two weeks until the rockfish opener.  If you are like me, those 2 weeks can’t go fast enough.

I’ve been talking about winter bassing a lot.  It’s been the primary sportfishing boat activity for the last 6 weeks.  Personally, I’ve been wanting to improve this aspect of my fishing, so I’ve been happy to go out and do it…that is when the boat gets out.  It has happened to me a couple of times now this year.  I got all my gear together.  Drove out to the landing.  I waited around for just a few more people to show up that never arrived.  Sorry guys, trip canceled.

I won’t say which boat(s) this happened on.  It’s not their fault.  It’s not a problem unique to any individual boat.  It’s just that time of year.  The good news is the season will be getting going soon.  In the meantime, I’ve found that it’s a good idea to have a backup plan… 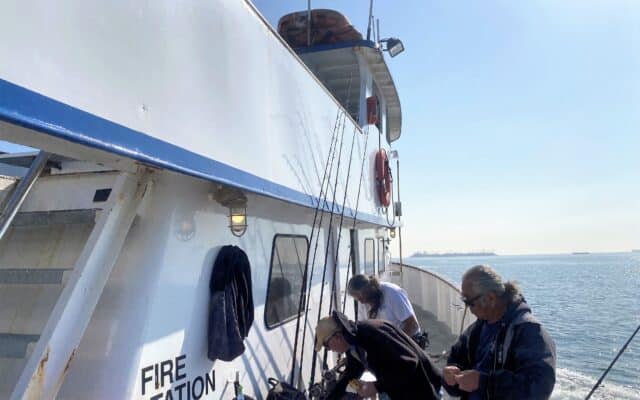 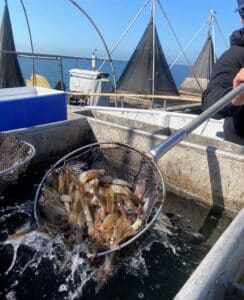 Last Wednesday (Feb. 12th), I got out on the City of Long Beach out of Pierpoint for their 10 am to 4 pm ride.  We almost didn’t go.  We were sitting around with 9 people hoping a few more would show up.  Thankfully that happened and we got off the dock with 14 anglers.  Capt. Mitch Christensen said we’d be making a quick ride down the beach to Izor’s after a brief stop at the bait receiver.  I was pleasantly surprised that we picked up not only live squid but also a couple of scoops of small sardine.  From there, it was just a short hop before we were fishing.

We dropped anchor in about 90-feet of water and almost immediately we got into some action.  Only problem was, they were almost all big treefish, with a couple of nice reds and some other random no-take (not until March 1st) fish.  After about 15-20 minutes though, the sandbass must’ve noticed there was some feeding action going on in our spot and muscled out the trees.  For a while it was pretty solid with 1 or 2 anglers (out of just 14) getting bent at all times.  The quality of the fish was very good too.  Only a few shorts with some truly big bass in the mix.

I had a major thrill on my first bass of the day. 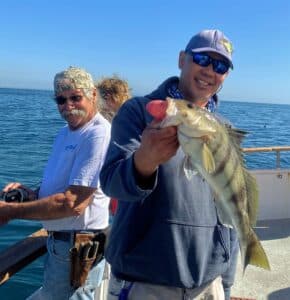 I was fishing my Carolina rig setup with a 2-ounce slider and 30# fluoro to a 3/0 Aki Twist hook with a live squid.  I got whacked hard.  It took a minute to pry the fish loose from his rocky hiding spot, but I got it going in the right direction.  Just as it was starting to come to color, I noticed a dark shape below it following it up.  As my fish hit the surface, the dark shadow made its presence known.  It was a big…probably 12 or 13 pounds…lingcod that took a bite at my fish.  Capt. Mitch was on the upper deck watching as was everyone else along the rail.  I let my bass flounder around on the surface as I fumbled in my pocket to grab my phone and take a pic, but I was too late to capture the shot.  Wow!  Too bad it wasn’t already March or deckhand Jason Daly could’ve free gaffed it.  What a thrill though!

It stayed pretty steady for a while, but then abruptly shut off.  Mitch toyed with the idea of going outside on some reports of yellowtail being spotted, but it was getting late in the day and he opted for one more bass stop to finish the trip.  I was lucky to get one more thrill before heading back in.

I was fishing the live squid on the C-rig again when I got picked up on the bow.  I was fishing a Torium 14HG on my 30# rod, so I should’ve been able to handle most anything, but I couldn’t stop this fish.  Even with my drag buttoned down all the way, it was still pulling line.  Eventually it broke me off.  It was probably a black seabass. but Jason teased me that it was probably a big coastal seabass and I farmed my opportunity to land a 70-pounder (insert crying emoji).  That was the day.  Over 30 bass, about the same on sculpin and one triggerfish to round out the count.  Solid day of fishing, with a great sign of fish that you can keep come March.  Thanks to Mitch, Jason and Earl for a fun day on the water. 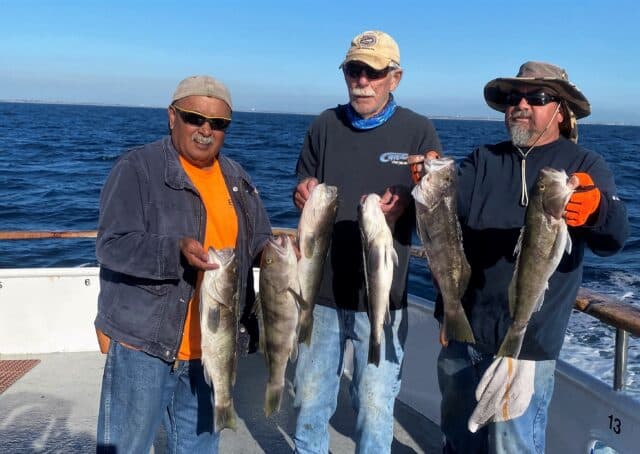 I’ve been putting in my time on the beach targeting halibut and have taken to leaving that stuff in my car.  It came in handy the couple times that I went to go fish the halfie and we didn’t get out.  I strongly suggest you pack some beach/jetty gear if you head out to fish the halfies these next couple weeks. 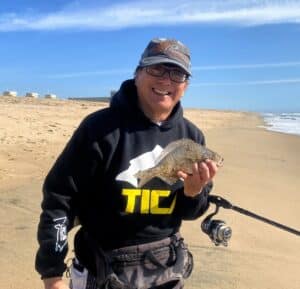 I’ll be honest, the beach action is pretty slow.  I tell myself it’s good to do some scouting though.  I’ve been noting where I find structure and looking for signs of bait.  I was at Santa Monica beach this weekend during low tide and found a huge hole I was unaware of previously.  I looked back, noted some landmarks where I found it and filed that dope away for future use.  I also fished some North Orange County spots this weekend with my surf sensei, Randy Toji (right).  He turned me on to where he had found some good structure.  No sand crabs yet, but it’s good to look.  We managed to get into a decent perch bite right at the top of the tide landing about 5 apiece using the Gulp worm on the C-rig before it shut off.  My attitude is it’s still a successful day if you learn something on the trip.  I’ve had to remind myself often of that idea this winter, but it will pay off when the season gets going.

Quick PSA, the San Diego is done with boat work and is kicking off its season this coming Saturday (February 22nd).  They’ll be fishing the Coronado Islands.  Nobody’s been there in a while, so it’ll be interesting to see if they find some yellows.  Stay tuned.