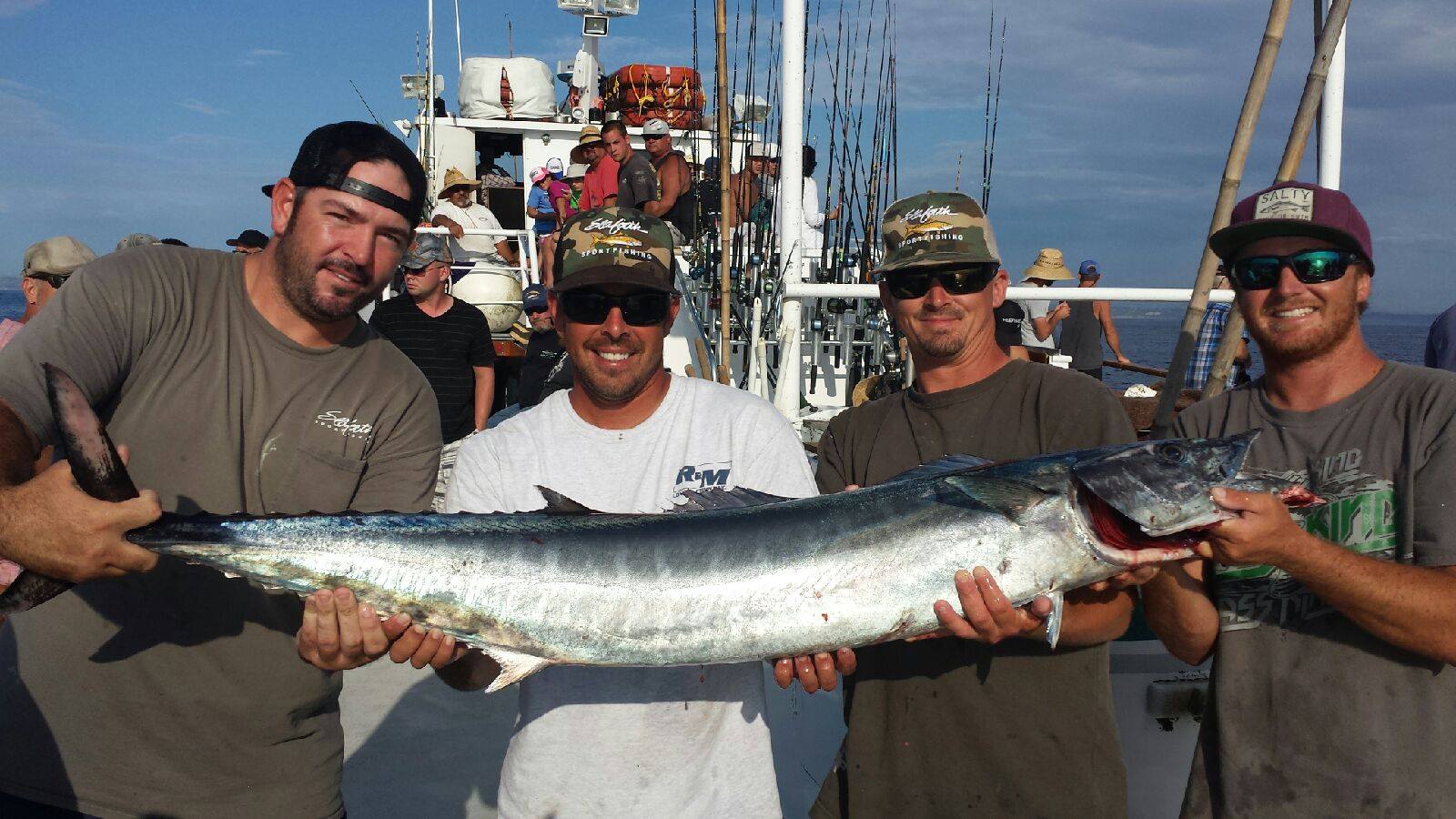 I never thought that I’d be reporting on a legitimate wahoo bite in Southern California waters, but it’s actually happening. While still not a sure thing, the chances of a fisherman going out and catching a wahoo are the absolute best they’ve ever been. Better yet, if you’re lucky enough to find the right zone, there’s a chance that you’ll catch multiple fish.

Over the last week, there’s been boats that landed two, three, four and as many as six fish per day. With fish exceeding 80-pounds being caught, private boaters looking to get in on the wahoo action are going to want to come prepared with tackle appropriate to catch these big fish. Most of these fish are being caught while trolling Marauders or large X-Raps that are rigged with wire. If you’re unfamiliar with what lure to troll or what wire harness to use, stop by your local tackle shop and they will get you up to speed. I just talked to my friend Danny Mun at Melton Tackle and he said that they have everything you need in stock and they’d be happy to get you pointed in the right direction. Any rod and reel combo that can fish 60 to 80-pound test will work fine for wahoo trolling, just make sure you’ve got fresh line and a smooth and functioning drag system.

Getting a Wahoo Bite Wahoo will bite a variety of lure colors. If it’s overcast I’d run something dark, like purple and black or orange and black. If it’s sunny I’d run a bright color like dorado of blue and chrome. A lot of these wahoo seem to be coming out of areas with flying fish, so if you’re running a marlin lure, you can’t go wrong with a flying fish color. Trolling speeds vary depending on what you’ve got in your spread, but 7 to 8 MPH is a good starting point if you’re trolling a mix of lures. If you’re only trolling Marauders or similar lures, you can get away with bumping it up to 10 to 12 MPH. On the same token, if you’re running X-Raps only you might need to slow it down slightly depending on how your boat trolls.

If I were heading out this weekend, I’d look for areas that are likely to aggregate bait. These include, temp and chlorophyll breaks, underwater high spots, islands and kelp paddies.

When fishing any of these, it’s important to keep your trolled lures in high percentage areas. If you pull up on a good looking paddy but don’t get bit, spend some time boxing the area around it before moving on. Just because you didn’t get a bite the first pass, doesn’t mean that there isn’t a wahoo around that might bite if you pull your lures past it in a different direction. If you’re making long moves between banks, I’d recommend pulling your lures so that you can run faster. Yes, you’re missing out on a potential bite from an open water fish, but I’d gladly sacrifice that chance to get more trolling time in a higher percentage area. But keep your eyes open while you’re driving. If you see anything fishy, slow down and drop in the lures.

When fishing islands or shallower zones along the coast, you’re going to want to pay attention to the contour lines on your plotter. Just like with the offshore banks, the transition from deep to shallow water at islands and along the coast will aggregate bait. And the steeper the incline the better chance of catching fish. So, if you’re trolling around, you’ll want to look for drop offs and canyons on your plotter. By hugging those, you’ll be working high percentage areas. If you don’t have your own boat but are looking to get a local wahoo, you should contact Captain Brandon Hayward of One Man Charters. He has an open party wahoo trip on October 25th. Short of that, I’d reach out to one of the San Diego based guides or 4-6 pack boats to see if they’d be interested in running a trip. The sportboats are are getting a few fish, but your chances of being the lucky angler on a full boat are a little slim. That being said, the New Seaforth out of Seaforth Landing caught a wahoo on a recent 1/2 day trip and the Mission Belle caught three fish while at the Coronados on Tuesday. So, if you’re heading out on a sport boat, bring your trolling gear along and ask the crew if it would be okay for you to troll for a while. If there are multiple people interested in doing so, you might have to share the trolling time.