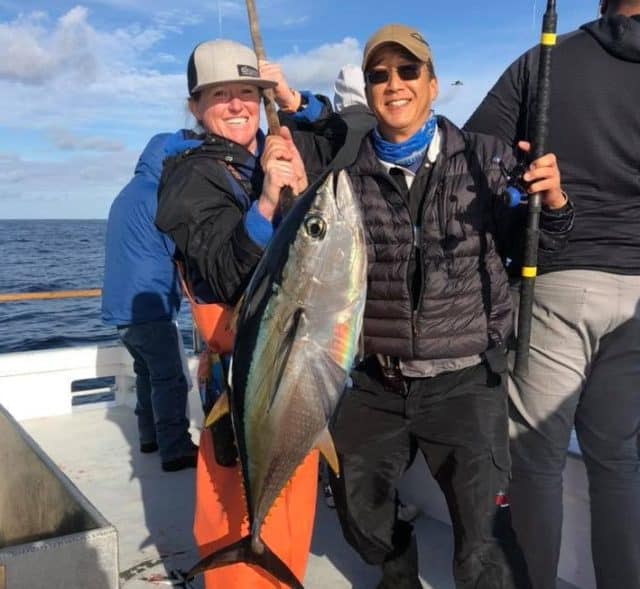 I took last week off due to the holiday and the fact that I had no idea what the Thanksgiving storm would have on our fishing conditions. The initial information I got from the surf reports sounded like the water temps had dropped big time. With no current fishing info to go on, I talked Decker into doing a deep drop swordfish trip on Sunday because I figured the rain and wind wouldn’t have any effect at all on the water 1,000-feet down. With air temps forecast in the 40’s on Sunday morning, we decided on a gentleman’s start and launched out of Newport at 9:00 a.m.

Looking back as we motored out of the harbor, I could see snow on Saddleback Mountain and the snow level was so low on the San Gabriel Mountains that it looked more like the coast of Alaska than it did Southern California. We cleared the harbor to find ice-cold and very dirty water along the beach, but once we got a few miles out we hit a current break where it jumped from 57 and brown to 64 and as purple as our water gets around here. As we were running out to our deep drop spot, Decker got a call from a friend who’d seen some bluefin foamers along the coastal shelf off Huntington Beach.  After a few hours of not catching anything, while watching two friends hook and land swordfish nearby (including this 335-pounder that Surge Vasquez caught while fishing solo), we’d had enough and went to look for tuna. 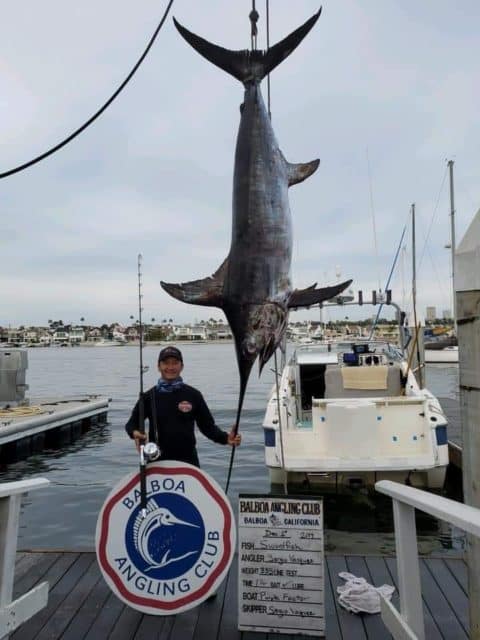 There had been a lot of bird activity below us so we ran down there first and found miles, and I do mean miles, of giant bait schools from the coastal shelf out to the 14. In some spots, the bait was marking 200-feet thick on the meter and the schools stretched unbroken for hundreds of yards. I’ve honestly never seen anywhere near that much bait in our local waters. While we didn’t find any cooperative tuna that were willing to come to the surface and bite a lure, we did find two different spots of them hanging in 100 to 200-feet of water. Based on how spread out the fish we marked were and how far those fish were from where the foamers were seen in the morning, I’d say that there’s quite a bit of bluefin still in our local waters and with decent weather in the forecast through at least the 14th, there will be opportunities available to catch it. 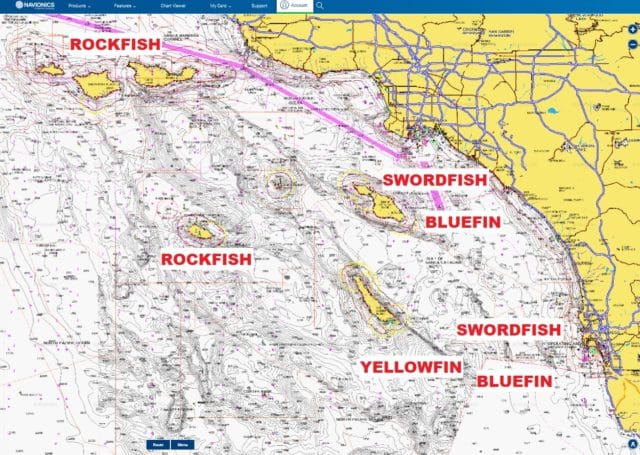 I say that the weather in the forecast is decent because it’s not going to be great but also not too bad for this time of year. We’ve got some light rain and southeast winds in the forecast over the weekend and some wind through next week but no sign of any big northwest bite killing blows. Going to this week’s Navionics Chart, most sport boats are fishing rockfish right now and your best bets for catching quality fish are at the Channel Islands and out at San Nicholas. The weather forecast for the 805 looks a little funky to me as it’s for southeast wind but the wind speed looks a little high not to be associated with an actual storm. It might just be a glitch in the forecasting software but I’d keep an eye on it if you’re planning on heading out. 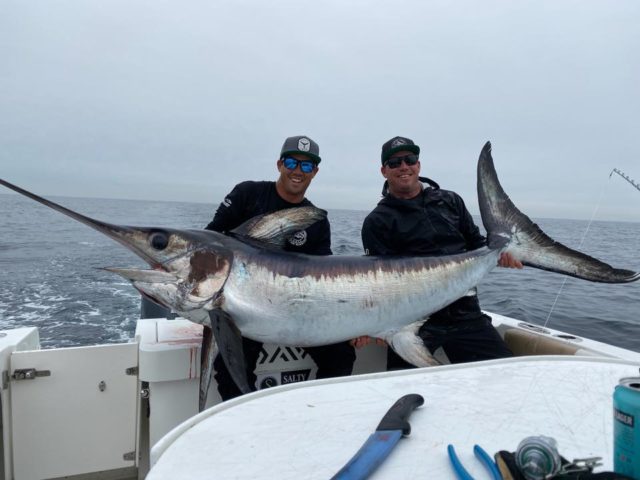 There are more swordfish biting off San Diego and there are some good ones in the mix, like this one caught by Pinnacle Sportfishing. While it may seem like a lot of swordfish are being caught right now, there’s a lot more guys fishing than there are catching. On Sunday I counted over 20 boats fishing along the beach and only heard of two fish caught. If you’re interested in learning how to deep drop on your own boat, or just interested in going out and doing some bobber watching on a charter boat, I recommend booking a trip with someone who’s been having consistent success as they’re obviously doing it right. If you’re in Orange County, I recommend contacting Pacific Bills Charters as Bill Depriest has been on fire along the beach out of Newport. In fact, I was forced to watch him catch yet another one right next to me on Sunday morning. As a side note, I’m beginning to suspect that I may just suck at deep dropping. Anyway, if you’re down south, I’d try and hook up with Duane Diego from Pinnacle Sportfishing. If you’re looking to do get on an open party swordfish trip, Bight Sportfishing  has been consistently catching fish and will likely have trips online over the next month. 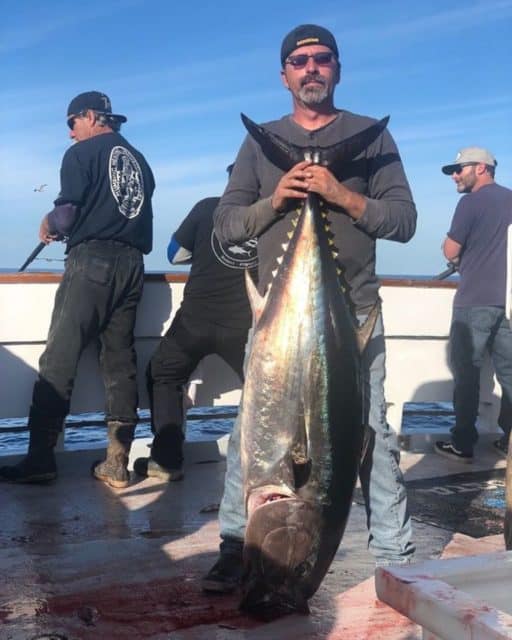 Things have slowed down a bit on the tuna front for full-day trips fishing out of San Diego but the Grande out of H&M Landing found the bigger bluefin earlier this week and hooked a bunch to land eleven of the 100 to 150-pound class fish. If you’re heading out this weekend, don’t forget to bring some heavy tackle in case you run into this grade of fish. Boats fishing in the general vicinity of the San Clemente Island weather buoy have been scoring on yellowfin but I don’t think anyone has been out that way since early this week and those fish might have moved somewhere farther away. As such, if you’re planning to get in another tuna trip this year, I’d recommend doing a 1 1/2-day or longer if you can find one because the lack of boat coverage means that you’re likely to spend a larger part of your day looking for fish and it sucks to have to leave them biting to get home for the next trip. On a 1 1/2-day, you can fish till dark which can save a tough trip. That’s about it for this week. Get out there and catch some fish!