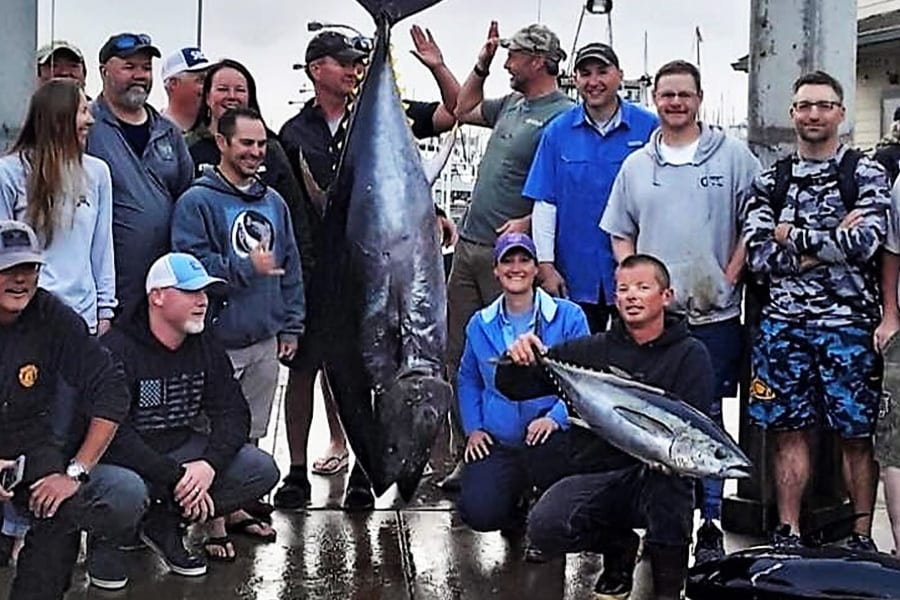 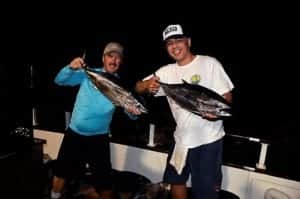 Way back in 2011, I was still relatively new to Southern California style saltwater fishing.  I went on my first offshore tuna trip aboard the Eclipse (now the Tomahawk) in September of that year.  Prior to going, we weren’t sure (or it could’ve been just me that didn’t know) if we were even going to find tuna.  The talk in the previous weeks was that there was a biomass of fish moving up the line that was about 100 miles south.  It was a day and a half trip and we ended up 55 miles south to fish around the commercial fishing pens when that was a thing.

It was considered a tremendously successful trip when we returned home 2 fish short of 5 fish limits of bluefin tuna (right).  The fish were an average of 15-20-pounds.  I remember thinking at the time how epic it would be to catch a 50-pound tuna, but typically you had to go on much longer trips to be able to check that box.

Different times.  Fast forward to this past week. 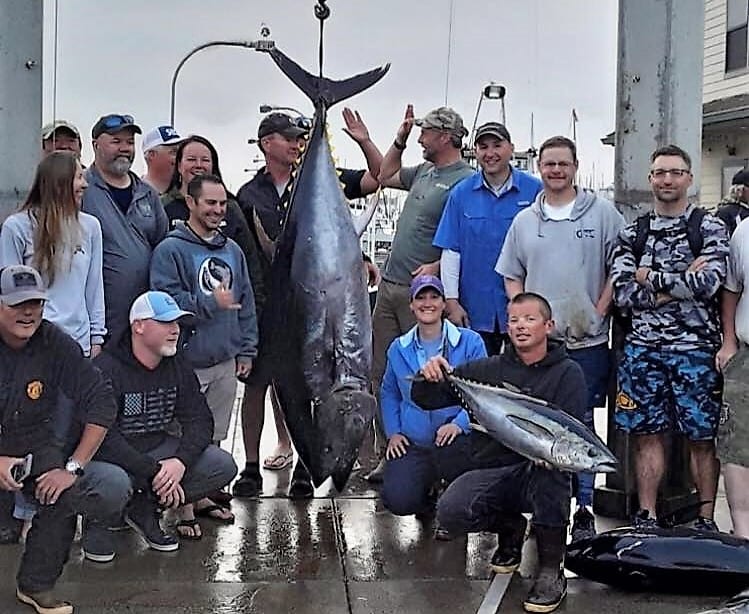 Pictured above are a group of happy anglers and Capt. Adam Williams (kneeling, holding the fish) as they returned Friday morning (Nov. 15th) from a 2.5-day trip aboard the New Lo An.  It was a successful trip that saw them catching 93 yellowfin and 38 bluefin for 22 anglers.  Adam said the yellowfin averaged between 20 and 60-pounds.  The big fish hanging on the Point Loma scale was caught on the kite and weighed out at 295 gilled and gutted…an estimated 320-pound fish.

It was the seventh supercow sized bluefin (300+) caught on the boat over the last 3 weeks!

That big one on my trip last week on the Thunderbird was about that size too.  It blows my mind to reflect back on that first tuna trip of mine and compare it to the kind of fishing we are enjoying today.  It truly is the best of times right now.  It seems like every boat in the fleet that has targeted these big bluefin have a fish of this size to their credit now.  The Fortune got one last week (left) and I’m probably missing some other supercows caught as well.  It’s just crazy what is happening now.

As I documented last week, the primary way of catching these giants has been through the use of the kite setup.  That’s why I was curious to dig in and find the story behind yet another supercow caught last week that happened aboard the Tomahawk. 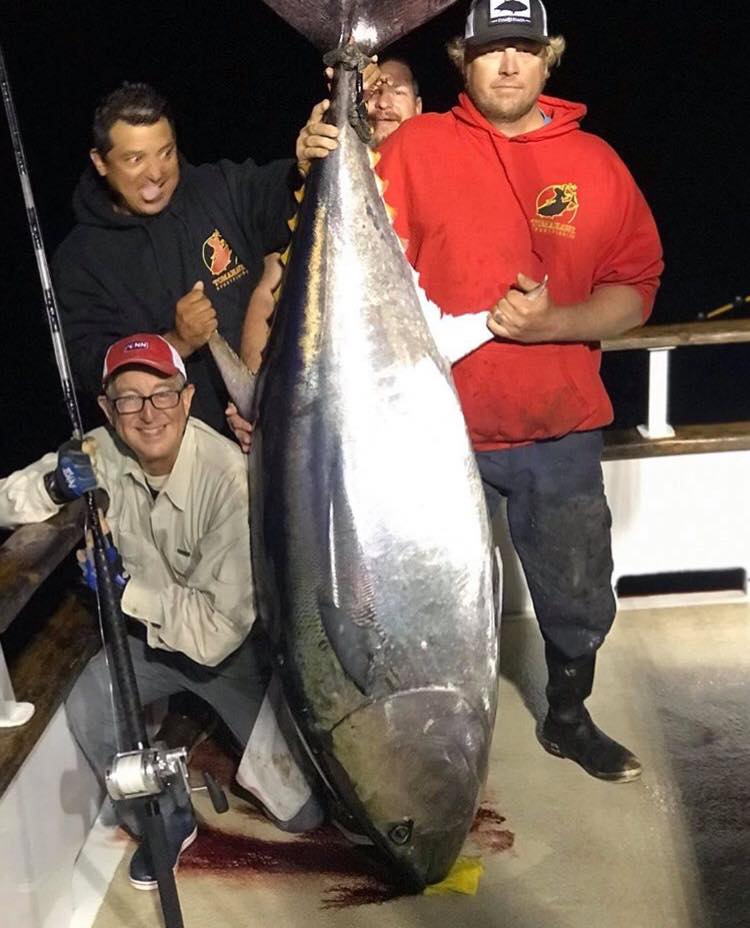 As you can see in the picture, angler Steve Carson of Carlsbad isn’t holding what would appear to be a kite fish setup.  It looks like maybe a 16 size reel.  Capt. Jeff Spafford (in red, mean-mugging the camera) told me this scene happened early Thursday morning (Nov. 16th).  They were on Day 2 of their 2.5-day trip.  It was about 4 am and Jeff was just getting up and trying to get some coffee in him when Steve walked up to him.  “Captain, are we marking any fish below the boat?”  Jeff responded, “I just got up.  If you want to find out, drop in and see for yourself.”  Ok…

Steve dropped in a Buffalo jig (the Nomad Design version of the flatfall).  First drop and he gets bit.  “I’m bit!  Jeff, I’m bit!”  Jeff didn’t believe him.  He was just getting around to putting cream in his coffee, but he ran out on deck thinking Steve was pulling his leg.  Nope, he was bit alright.  They watched as the line went zipping off the reel.  Jeff noticed that Steve had markers on the white braid as it peeled off the spool.  It was getting dangerously close to coming to the end of the spool, yet Jeff said Steve remained calm.  It finally stopped.  Jeff asked, “How much line do you have left?”  “About 100 yards” Steve responded.  At that point, Steve dropped his reel into low, set his rod on the rail, and started reeling.  Second Captain, Sal Salazar (looking crazy above) had joined them on the rail, and Jeff left to go up to the wheelhouse in case he needed to move the boat.  Just 40 minutes later, Sal was putting the first gaff into a fish that went 315-pounds.  Jeff told me that Steve had been going to Puerto Vallarta for years, chasing the elusive supercow to put on his fishing resume.

Pretty crazy he finally got his fish on a 2.5-day out of San Diego.

It’s still going.  Go get some.  Good luck if you get out there.