We’re officially at the halfway point in the month and two weeks away from the season opener – Friday, March 1st.

All by itself, that’s reason enough for celebration.  A majority of the boats right now are doing their annual maintenance in preparation for the opener.  Other than the sculpin and bass half-day trips I last talked about, and the Colonet trips that I’ve written about too, there’s more anticipation than action right now amongst So Cal anglers.

That will change in a major way come March 1st 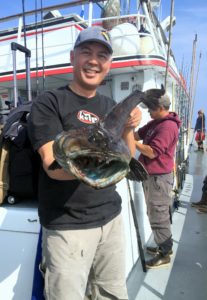 A lot of people are excited about our fishing depth limit moving down from 50 fathoms (300 ft) to 75 fathoms (450 ft).  I’m not one of them.  I was reminded about deep water rockfishing on my Colonet trip.  Sure, there are some better quality rockfish at deeper depths, but reeling them up from those deeper depths is drudgery if you ask me.

One of my last trips of the year was in November on the Eldorado going to San Nicolas Island (left).

My favorite thing about rockfishing is targeting lingcod with swimbaits and jigs.  When you’re fishing really deep, it makes this style of fishing difficult.  Typically, by the time you get into the zone of where you need to be, your line is straight up and down.  Any advantage you might have gained in covering more ground is negated.  You might as well fish a double dropper loop.

However, at San Nicolas, because it’s a Cowcod Conservation Area, the max depth is going from 25 fathoms to 40 fathoms.  Think of all the virgin territory that hasn’t been fished in decades.  Has to be some monsters in there, so I’m excited to go fish there, especially early in the season. 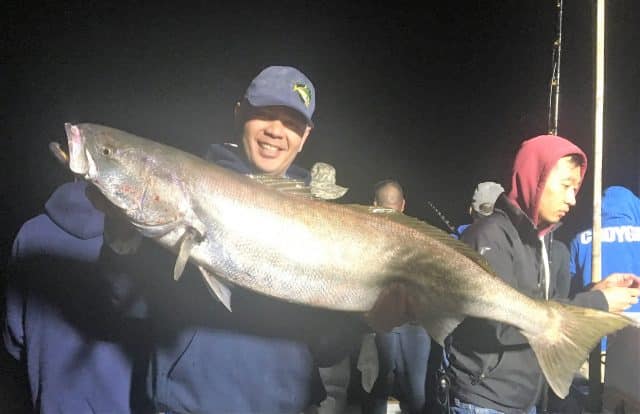 Two years ago, I caught my personal best white seabass on the backside of Catalina aboard the Fortune.  My PB fish was 62-pounds, weighed with the boat’s digital scale.  The fish above was a smaller one I caught too!  I should’ve asked for help and gotten a good picture with me and one of the crew holding it.

It was a day and half trip, which was critical.  All day we picked away in the green water with little to no result.  But come dusk, when the overnight boats had already left, the water started moving and it was game on.  We hit full anglers and crew limits and left them biting.

I wrote a couple weeks ago about how some private boaters on skiffs had already gotten into some seabass action at the islands.  From everything I’ve heard, it’s going to be a good year this year.  Last year was tough on me for this fish.  I had a lot of trips cancel.  There were some “shoulda been here yesterday” trips.  This year I aim to get mine and I think it will happen right out of the gate.

Yup, NOAA didn’t just predict that we’d see El Nino conditions this year, they said it’s already there (above)!  In fact, NOAA issued an El Nino advisory yesterday.  Everyone remembers how crazy fishing got in 2014 and 2015 when El Nino conditions pushed warm water our way.  Will that happen again in 2019?  That’s yet to be seen, but don’t put those wahoo lures on eBay just yet.  All those El Nino dreams you might have had then, you may have a chance to make come true (or relive) this year in our local waters.

There’s a lot to look forward to in the 2019 fishing season.  And it will be kicking off in earnest in just 2 short weeks.  Get ready.