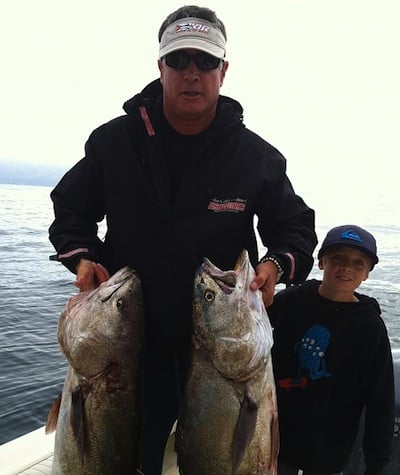 With the bad weather that came through Southern California late last week, it looked like the fishing over Memorial Day weekend was going to be a bust. But once the worst of the weather blew past, the fish started biting better than they did before the wind showed up. The fishing is really starting to come together from the Channel Islands on down to Mexican waters.

The barracuda, which had all but disappeared after their initial onslaught, have returned. Although the fishing isn’t wide open, boats are catching plenty of fish and the bite could go full speed at any time. The islands are still kicking out the occasional sea bass and yellowtail, but with the stable weather we’ve experienced this week, that bite should continue to improve.

The yellowtail bite at the Coronado Islands has rebounded to pre-storm levels and with fish being caught off Ensenada, there are plenty of fish still waiting to move up the line. Conditions are looking really good for the Bloodydecks Yellowtail Shootout which is scheduled for June 22-24.

The really big news this week is the white sea bass bite that blew up along the coast between Dana Point and Oceanside.

I’ve been sworn to secrecy about the exact location of this top-secret bite, but if you want to try and find it yourself, just launch out of Dana and head south until you find 50 to 100 boats anchored up in a tight group. The fish are on the squid grounds down there and over the weekend, the bite was as good as it’s ever been for fish in the 40- to 60-pound range. 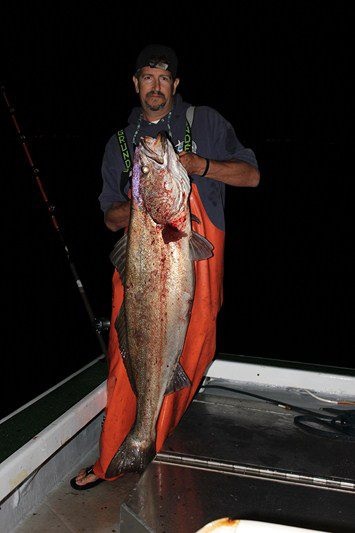 I talked to Mike Conroy who got there ahead of the crowd on Monday night. He and a buddy managed to land a couple of big sea bass, including Mike’s personal best, which weighed more than 50 pounds!

“It’s a pretty stupid bite down there right now and the fish are all big,” said Mike, who caught his fish on squid. “The fish we caught in the dark was on a 1/8-ounce lead-head. The sea bass were feeding high in the water column in the dark and when it got light, we switched to dropper loops to get bit.”

This bite, like almost every “secret” bite, is going to receive a ton of boat pressure. I know that it sucks, but it’s the price we pay for living in the information age. I like to think of it this way… If it weren’t for the information available on the internet, most people probably wouldn’t even know about the bite. So how can they be mad that other people find out about it as well?

If you don’t like fishing in a crowd, go out and find your own fish. I know that trying to find a new fishing spot is risky and takes a lot more work than just driving up and joining the fleet, but it’s also a lot more rewarding.

The guys who initially found those biting fish anchored their boat in the optimum position. Let’s call them the “Alpha Boat.” If the bite is really good, the boats anchored around the Alpha Boat can still get bit, though probably not as well. As the bite gets better and more boats arrive, other boats will become Alpha Boats if they move off a bit and find more fish. The secret to doing well in a crowd is to become the Alpha Boat. Then you’ll start hooking fish.

If you have 100 boats fishing and five of them are in an Alpha Boat position, those five will get the most bites. Let’s say that each of those boats has five boats around them that also get bit. That makes for a total of 30 boats catching fish while the other 70 boats sit and watch or maybe get a sporadic bite. Another thing to consider is that a 60-pound sea bass is going to take some line and if you’re in the middle of the pack, your odds of landing it go way down. Do you see what I’m getting at?

The simple answer is to find your own fish, but accomplishing that is not so simple. The first thing to do is to learn about the fish you’re targeting. For white sea bass you want to learn from the guys that consistently catch fish. Mark Wisch and Brandon Hayward have both written books and put on seminars to help you improve your sea bass techniques and provide waypoints to some known fishing grounds. 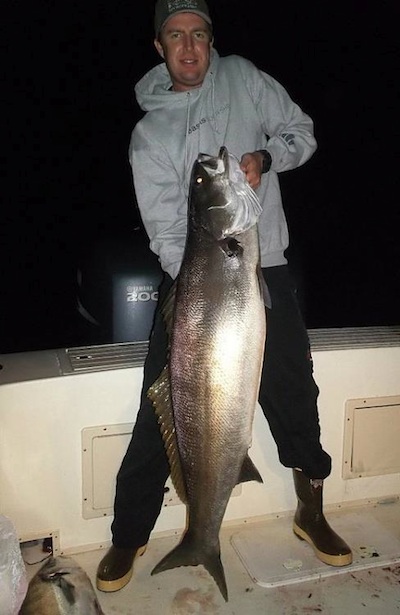 The second step in finding your own fish is to put in some time and learn how to read the conditions. Once you understand what you’re looking at, you can look for other areas with similar conditions to those that are holding fish.

A couple of years ago, my fishing partner and I headed down to fish sand bass on Newport Reef on a Saturday and arrived to find the entire reef covered in boats. There were at least 20 boats on the small spot, with some of them anchored and others drifting. Some just drove around in circles. It looked a lot like the scene in Jaws when all of the fishermen were headed out to get the bounty on the shark.

We left the area and moved a short distance to another string of reefs to fish sand bass. We had the area completely to ourselves and could take our pick of spots to fish. Within a few minutes of arriving, I saw a bird school pop up and I idled over and marked sea bass. Matt dropped a swimbait on the marks and hooked a big fish that came unbuttoned within seconds. As he was winding in to make another cast, he got bit again and within a few minutes we had a 35-pound white sea bass in the boat.

This is a pretty simple example of how to find your own fish. Although we weren’t targeting white sea bass, I saw boats fishing them unsuccessfully on a certain type of spot. When I moved on to a very similar spot nearby, I kept an eye out for bird activity and found a new bite. When those birds started dipping, we were the only boat within a mile. As the rest of the boats fought for position where the fish had been, we slid up on our spot just as the bite turned on.

If you do your homework and learn how to understand conditions and read the bottom, you will eventually become the Alpha Boat and you can laugh to yourself when the entire fleet anchors up around you.