In last week’s So Cal Scene, I touched upon the subject of trolling while discussing fishing kelp paddies. Apparently I should’ve spent a little more time on the subject as I’ve received several emails from readers with questions like, “What colors and brands of lures should I use?” “How exactly should I set up my trolling spread?” and “How do I go about trolling that spread?”

My honest answer to most of them was, “I don’t know, but I’m going to find out.”

So, over the weekend I met up with a couple of local pros and asked them to explain the tackle and techniques they use and in terms that a trolling neophyte like myself could understand.

My first stop was to visit my friend Danny Mun at Melton Tackle in Anaheim, California. He started pulling lure after lure out of the massive showcase and described them using strange terms that I assume are only intelligible to those well versed in marlin speak. I was flattered that he’d assumed I’d understand the lingo, but requested that he dumb it down a bit.

For anglers trolling Southern California waters, there are really only two lure sizes that you need to cover most of the bases. Certain instances call for specific lures outside of those parameters, but two sizes will usually get the job done. First are the small lures, which are usually five to seven inches long and are used when targeting school-sized tuna, dorado and yellowtail. These sizes come with various head shapes, but the tried-and-true bullet-head and jet-head designs tend to work best for a range of species. These lures run straight and can be effectively fished at a variety of distances behind the boat.

Then come the big lures, which vary in size from 10 to 12 inches or larger.

These lures are mainly used for targeting marlin, but will also work for dorado and larger tuna. These come in several different head styles. Bullet and jet heads run the same as the smaller ones, while plunger and angled heads will run with an erratic swimming action on the surface that leaves a bubble trail while intermittently splashing on the surface. 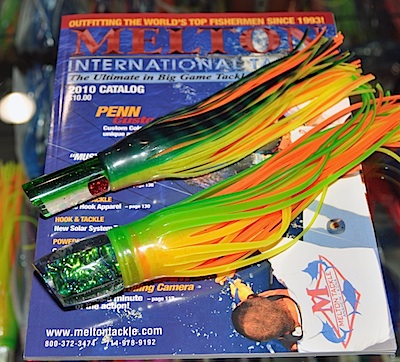 Choose your lure color depending on lighting conditions and other factors such as what bait the fish are feeding on. It’s good to carry a variety of colors. Danny told me that he chose the lures for the photographs based on what his customers have been using to catch fish, so similar colors should work for you. He also mentioned that the dorado have been biting the bigger marlin lures lately, especially the Black Bart Rum Cay Candy, and pink has definitely been a hot color in Southern California.

Smaller lures are fairly easy to rig and you’ll only need minimal supplies to do it. It’s always better to crimp trolling hooks than to tie knots, but you can get away with knots on smaller lures if you need to. When rigging smaller lures, Danny recommended using a single or double hook that is appropriate to the size of the lure and use enough beads in between the hook and the lure so the barb of the hook sits just above the bottom of the skirt when it’s rigged. 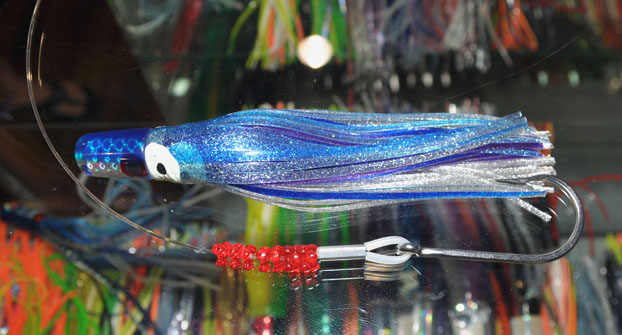 Rigging bigger lures takes a lot more time to explain than I have in this column, but luckily Ali Hussainy has already covered the basics in the article How to Rig Marlin Lures.

Once you’ve got your lures rigged, it’s time to set up the trolling spread. The size and look of your trolling spread depends on your boat. If you’ve got a large boat with outriggers and an experienced crew, you can easily troll a five- to seven-lure spread, but if you have a smaller boat you’re much better off using a three- to four-lure spread.

Danny cautioned that regardless of boat size, anglers should start out trolling three rods and only work up to five once they’re comfortable fishing three. With five rods out, the margin for error goes way down.

Below are a couple of illustrations of the different trolling patterns. As you can see, the lures are staggered and their distance from the boat is indicated by how many waves in the wake they are behind the boat’s transom. These are only suggested distances. The optimal trolling distance varies from boat to boat, so you’ll need to figure that out on your own. 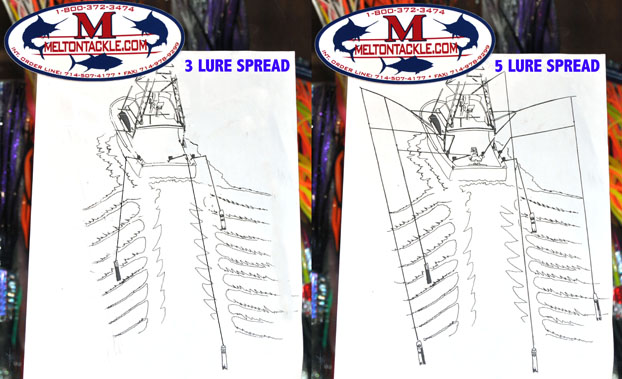 Lure placement in the spread is equally important as the lures you choose to fish with. Some lures are more effective in certain positions. Below is an example of a three-lure spread that would work well for dorado with a shot at a marlin. It has two jet heads running tight to the boat and a Rum Cay Candy in the center position. To fish tuna, you could leave the jet heads in the spread or switch them out with some feathers and change the long lure to a cedar plug. 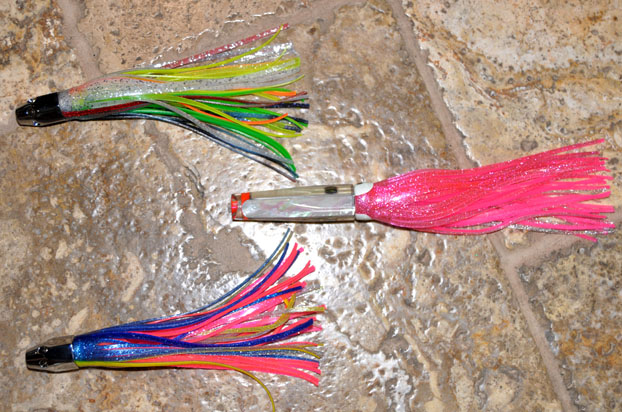 These are just the trolling basics but they’ll help you out when it comes time to drag some jigs. Next week, I’ll be talking with offshore specialist Jimmy Decker about the tackle and techniques that he uses to target California’s striped marlin and other offshore species.