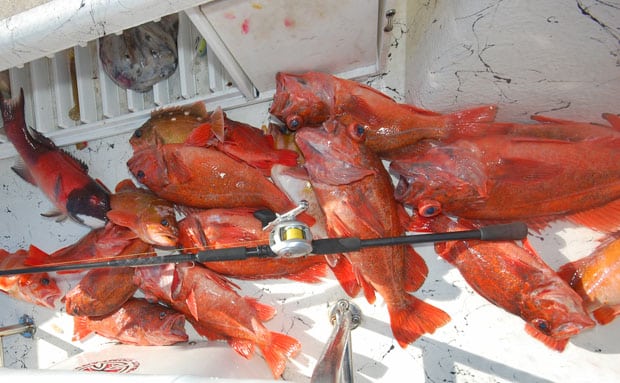 Like many people, I spend way too much time perusing the fish reports on the BD fishing forums. What can I say? It’s addicting. I’ve repeatedly tried to break myself of the habit, but the withdrawals are just too painful. I’ll find myself sitting at my desk trying to work, but unable to focus on it because I’m wondering about some random thing, like whether or not the trout bit at Irvine Lake yesterday. Before I know it, I’m logging in to find

out. The really sick part is that I don’t even like trout fishing! I just like knowing whether or not they’re biting.

While doing some of this important “research” I stumbled across an interesting trend in the rockfish reports posted by our forum members. This being rockfish season, there are lots of members posting reports, but for some reason the same small handful of members consistently post huge reports while everyone else is reporting mediocre fishing. You know the reports that I’m talking about: “We took our boat out and had another day of limits of big fish that we caught in an undisclosed location that was only 15 minutes from the dock…”

If you’re like me, these reports leave you scratching your head and wondering just how these guys can consistently catch big fish in areas that get tons of pressure. Do they have secret spots that no one else fishes, or are they just fishing the same areas as everyone else but fishing them differently?

In hopes of answering these questions, I enlisted the help of my fishing partner Matt Kotch and we took our boat out on the hunt for some big rockfish. Arming ourselves with the information we’d gathered from the BD boards along with some waypoints downloaded from FishDope (www.fishdope.com) we planned a run to the 150 Area, outside of the Horseshoe Kelp in Long Beach to see if we could locate the big reds that had been rumored to be biting there.

Matt and I fish bass together at least once a week and when it comes to getting the boat ready before a bass trip, we operate like a well-oiled machine. But if you take us out of our routine the results can be disastrous. I won’t bore you with all the details of this particular disaster, but suffice it to say that we found ourselves without GPS coordinates, hooks or sinkers (all forgotten at home) and no money for bait (we don’t usually use bait, so it never even entered my mind).

Thankfully, none of these problems proved insurmountable. I knew how to get to the 150 Area. Matt took the treble hooks off of a couple of Megabaits and tied them as dropper loop rigs, using the hookless 4-ounce Megabaits as sinkers and a friend gave us some fresh-dead squid. So, with most of the kinks worked out, we were on our way. red fuzz of fish marking above it. I eventually gave up and made a random drift. We didn’t catch anything in the first few minutes, but there was a breeze so at least we were covering some water.

Fifteen minutes later, we got our first bite of the day and while Matt was reeling in a 3-pound red, I logged the spot into the plotter. After few more minutes with no bites, we ran back to the waypoint I’d logged earlier. Stopping on the numbers, we dropped down and had an instant double hook-up on nice reds. Checking the fish finder, I saw that there were some heavy worms on the meter instead of the fuzz that we’d been seeing when we weren’t catching anything.

We did another drift on that spot and then went back on the hunt but this time we knew what we were looking for. We quickly found another spot with similar marks and it too produced a double hook-up on reds. We worked the pattern of, “move boat, meter fish, drop down, catch fish, move boat” for the next several hours and ended our day with a nice bag of reds, with some chuckleheads and even a sheephead thrown into the mix.

So, did we learn how to catch rockfish like the pros? I have no idea… But we did learn a lot about our local rockfish and based on what I’ve seen, I can assure you that you don’t need to have a secret spot to have a successful day on the water. You just need to pay attention and develop patterns.

Patterns vary day to day with conditions, but the basics of developing a pattern are always the same. You need to try different things until you get your first bite, then recreate the conditions that produced the bite and try to get another. If you can get that second fish to bite you’ve developed a pattern and you should be able to continue to catch fish on it until conditions change. We found that the reds were scattered around a big area of hard bottom, and they were marking in a distinctive manner. So rather than making long drifts across the hard bottom in the hopes of stumbling across some fish, we spent our day driving around finding them. It probably wasn’t as relaxing as making long leisurely drifts, but it definitely put fish in the boat. Conditions change and I’m sure they’ll be different when we head back out there this weekend, but I am looking forward to the challenge of figuring out the new pattern — whatever that may be.

In next week’s So Cal Scene I’ll be sharing some secrets that will help you outfish the rest of the passengers next time you’re targeting rockfish from a sport boat.