Offshore fishing is still the main attraction in Southern California and with more tuna, dorado and marlin pushing into U.S. waters and getting closer to the beach every day, the action has moved well within range of most private boaters. I haven’t taken my boat offshore yet this season, but I’ve been getting my offshore fix by listening to the VHF while fishing calico bass along the coast.

The offshore fish are there, but they are getting a ton of pressure from private boaters and only a small percentage of those boats are catching fish. The rest of the boats spend their days chasing radio fish, fighting over kelp paddies and complaining about there being too many boats on the popular spots.

It’s easy to chalk it up to luck when you hear about the fisherman that drives away from the fleet and finds a magic kelp paddy that’s full of yellowtail and dorado, or the boat that gets a blind jig strike on tuna when no one else is catching anything. But if it’s really luck, then why do the same guys seem to get lucky trip after trip?

Well, there’s an old saying that pretty much sums it up: “Luck is what happens when preparation meets opportunity.”

I met up with Capt. Jamie Thinnes of Seasons Sportfishing, a fisherman who gets “lucky” much more frequently than most, and asked him to take me through the steps he takes when planning and executing an

“If I’m planning a trip offshore, the first thing I’ll do is look for reports from the area that I plan to fish. Then I take the information from those reports and compare them against the sea-surface temperature (SST) and chlorophyll charts on FishDope (www.fishdope.com). For example, if someone says they caught bluefin at the Hidden Bank, I’ll check the water temp and clarity in that area to see if it’s likely to hold fish. There are always rumors of big bites floating around at this time of year, so it pays to filter them out before you leave the dock.”

“A lot of private boaters make the mistake of getting too keyed-in on fishing a particular spot when they go offshore,” he says. “Just because someone reported that they caught fish at a certain spot, like the Nine Mile Bank, doesn’t mean that you need to be right on top of that spot to get bit. Most of the fish this year have been on kelp paddies, so you’re better off looking for good water and kelps than you are trying to fish a particular spot.” 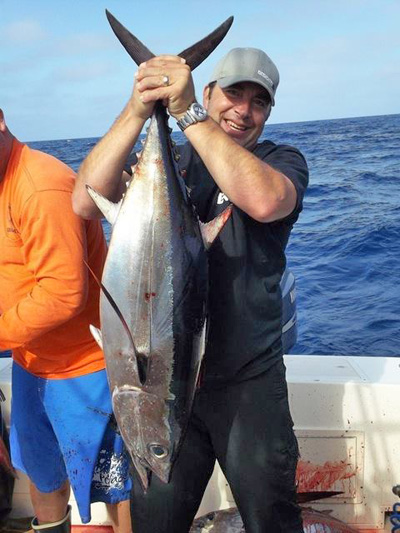 Once Thinnes has filtered through the reports and information he’s gathered, he’ll begin to formulate his game plan for the trip.

“Most of the fish that we’ve been catching lately have been coming off of kelp paddies and nine-times-out-of-ten those paddies have been in warm and purple-blue water. So I’ll use the SST and chlorophyll charts to look for the warmest and cleanest water in the area that I plan to fish.”

Armed with as much information as possible, Thinnes will head offshore in search of fish. “The first thing I do when I get to an area that I plan to fish is look for signs of life. In a fishy looking area, you’ll see things like birds, bait, porpoise and sometimes whales. You don’t need to see all of those things to get bit, but seeing any of them can be an indicator that there are fish in the area”

Once he finds good water, he’ll start looking even closer. “If I find an area that looks good, I’ll slow the boat down to trolling speed, put the trollers out and get up in the tower with the gyros. My Parker doesn’t have a much of a tower, but it’s a better vantage point than I have from the wheelhouse, so I’m happy to have it. If you don’t have a tower on your boat you should do whatever you can to (safely) get up as high as possible when looking for paddies. And binoculars are a must! If you can afford gyros, get them. But if you’re on a budget, a good pair of 7 x 50 binoculars will get the job done.”

Regarding his trolling spread while looking for paddies, Thinnes offered, “I’ll normally cruise around at 7.5 knots and drag a cedar plug or Rapala in the shotgun position, run a couple of small jets close in and have a couple bright-colored feathers at the third or fourth wave in the wake. A lot of the dorado schools have been in open water lately and they’ve been hitting the bright color feathers (like pink). We’ve also been getting the occasional blind strike on big albacore and bluefin, so it’s worth the effort of trolling while we look for paddies.” 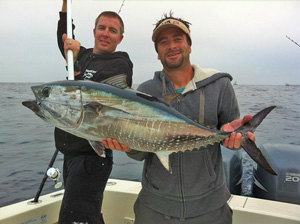 Once he’s found a kelp paddy, Thinnes will approach it slowly. “The fish have been way off the paddies lately, sometimes more than 100 yards away, so you don’t want to race up to the paddy. Instead, slide up slow and be ready to cast on the fish when you see them. The same thing applies when you are running back up on a paddy to make another drift. The fish have probably moved off the paddy during the drift so take it slow until you find them.”

In closing, I asked Thinnes for some tips on dealing with the weekend crowds when fishing paddies.

“It’s almost impossible to have a paddy to yourself for more than a few minutes on a weekend, but if everyone works together you can still catch fish. If I’m on a paddy and see another boat approaching I’ll call them on the radio and let them know how I’m fishing in relation to the paddy and the best way for them to approach it. On the other hand, if I see other boats on a paddy, I’ll normally just keep driving and look for my own. Kelp paddies normally line up along the edge of a current break, so if you find one paddy you’ll normally find more of them in a line above or below it. Sure it takes extra work to go out and find your own paddy, but it’s a lot more rewarding than being the third or fourth boat to pull in on a picked over piece of kelp.”

If you’re interested in getting some one on one instruction from Jamie Thinnes, he has charter and open party dates still available for this summer on his 25-foot Parker. You can contact him through his website at www.seasonssportfishing.com.