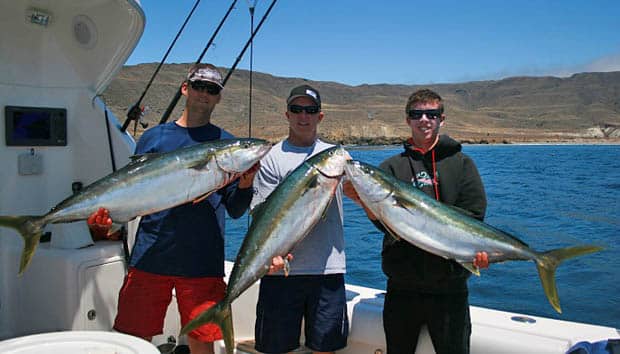 Things were looking pretty good this time last week — the tuna were starting to show offshore, the sand bass and barracuda were arriving at the local spawning grounds and the islands were pumping out consistent scores of white sea bass and yellowtail. But the excellent summer conditions that were developing hit the brakes over the weekend when offshore weather coupled with coastal upwellings set the whole thing back a few weeks. The weather offshore has died down, but the severe temperature drops along the coast are going to take a while to clear up. 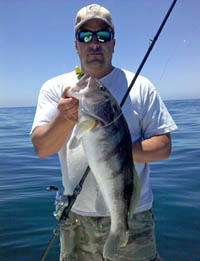 I fished out of Long Beach with Batson Pro-staffer Mike Dumalski on Saturday and the water temp was 10 degrees colder than it’d been the previous week. As expected, the fishing was slow and the massive fleet of boats targeting sand bass and barracuda off Sunset Beach was nowhere to be seen.

The local reefs and wrecks still kicked out a few nice fish for us, including a 7-plus-pound sand bass, but all of the fish were hugging the bottom and biting like they do in the winter. Barring another upwelling, the water temps should continue to rebound, but it’s anyone’s guess as to when the migratory fish will return. 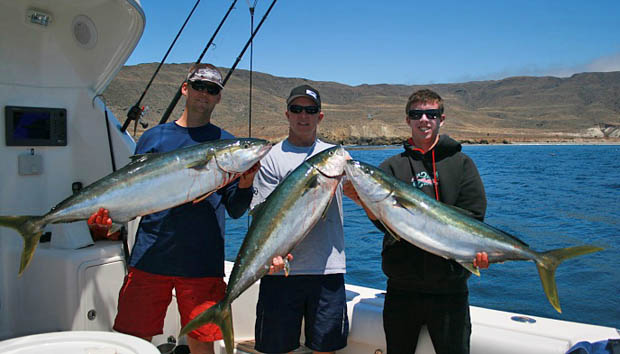 The yellowtail bite at San Clemente Island, however, has remained constant. Distance, Naval closures and potentially rough seas have kept the crowds down but the boats making the run have been scoring some huge yellows. These fish are averaging 20 to 25 pounds with standouts exceeding the magic 40-pound mark. So, choosing the right gear for the trip is of paramount importance.

Most of these fish are being caught by overnight boats, like the Freedom out of 22nd Street Landing, so I’ll concentrate on gearing up for some sport-boat fishing. If you head out there on your own boat, the same tackle will work, but you’ll have more flexibility in your choice of techniques.

The majority of the yellows are being caught on live squid fished in deep water off the backside of the island’s east end. If you’re fishing with bait, you can get by with bringing one rod loaded with 30- to 40-pound line, a handful of 6/0 hooks, a couple torpedo sinkers and a few small sliding sinkers.

But do any of us just bring one rod on a trip like this?
I doubt it.

We’re fishermen and bringing too much tackle is pretty much par for the course. So, let’s take a look at some of the standard tackle you’ll need and a couple of outside-the-box items that might just get you bit when others struggle. 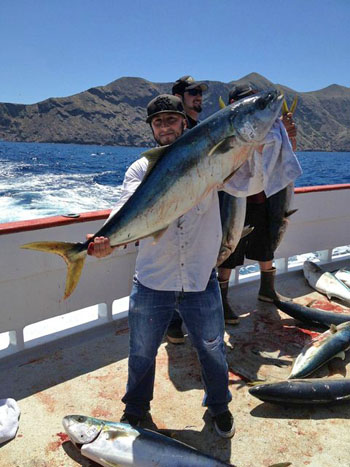 The first rod you’ll want to bring is a heavy bait rod. My go-to rod for this application is a 800H Calstar Graphiter matched with a Shimano Trinidad 20 loaded with 80-pound Spectra and an 8- to 10-foot section of 80-pound fluorocarbon leader. I tie a longer leader on this rig than my standard 3 to 4 feet because I don’t need to cast it and the longer leader allows me to retie a couple of times if I’m changing from a dropper loop to a sliding sinker rig or vice versa.

The weight of your sliding sinker weight will vary depending on conditions and where the fish show in the water column so I’d bring a variety of sizes from 1/8 to 1 ounce. A 6- to 8-ounce torpedo sinker works well for fishing the dropper loop on this heavy set up. I usually use a 6/0 Owner Aki Hook, but any style of hook will work.

I’m not a big fan of doing the “bait and wait” thing when fishing yellowtail, especially when there are 25 other guys on the boat doing the same thing. The odds of my bait getting bit in a scratchy bite are just too low, so I’ll usually fish the iron instead. For some reason, most guys are reluctant to throw the iron when the fish are keyed in on squid, but at times it’s extremely productive.

Both of these rods are extremely powerful and a lot heavier than most guys would fish, but I’d rather have the extra power and not need it than need it and not have it.

Since the California yellowtail are keyed in on squid, I’ll only bring two colors of jigs — a scrambled egg (brown, yellow and white) and mint-and-white, which doesn’t look anything like a squid but gets bit regardless. I use a Tady 4/0 Heavy or a Tady 9 Heavy when fishing the yo-yo and a Candybar 112 when fishing the surface iron. I like to bring at least two jigs of each color and style so I’ll have a back up if I lose one.

Fishing the yo-yo is pretty simple, just drop the jig to the bottom, bounce it a couple of times, reel it in as fast as you can and repeat until you get bit. If the fish are marking near the bottom, you don’t need to reel the jig all the way to the surface, just wind it up half way and then drop it back down.

Making a surface iron mimic a squid is a little more involved, but the technique is easy to master with a little practice. Cast the jig away from the boat and allow it to sink to the bottom. Burn the jig for a couple of winds, then slow it down for a dozen or so cranks and then drop it back to the bottom. Repeat this pattern until your jig is straight up and down, then retrieve it and make another cast.

This technique makes your jig look like a squid shooting up off the bottom, then suspending while it looks to feed or mate before zipping back to the bottom.

If you’ve ever watched a video on squid behavior, they spend a lot of their time doing this and as a result, the yellows will key in on this behavior.

If you aren’t getting bites, try changing up your retrieve slightly and pay attention to what works so you can repeat it on the next cast.