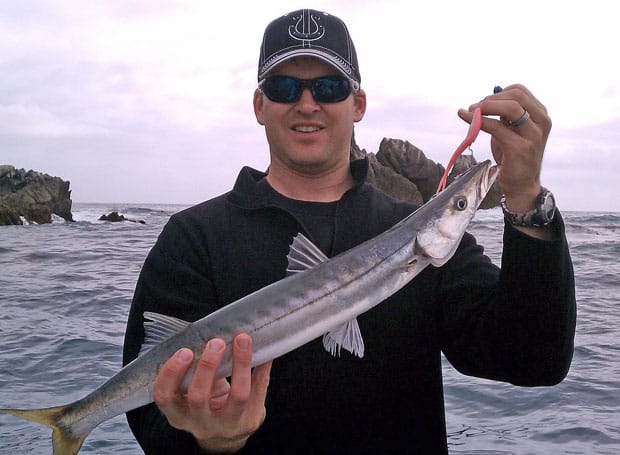 With stable 60-plus degree water covering much of the So Cal Bight, the fishing has been getting better each week as more species join in on the action. Last week’s news was that the white sea bass bit at the islands and while the offshore weather knocked down the counts mid-week, the fish are there and the bite should continue to improve in the coming weeks.

The big news this week is the arrival of the barracuda. Although there haven’t been any huge scores as of yet, I believe that the big spread of fish from San Diego to Santa Monica Bay is an indicator that it’s going to be a good barracuda season. There is a ton of fin bait along the coast right now and if the water temps remain stable, it’s only a matter of time before the bulk of the fish move in and hopefully stay for a while.

There is no sure thing on the scene right now, so if you want to target the barracuda I’d check the landing reports to find the best fishing. Most sport boats are getting out with really light loads so you should have no trouble finding an open spot at the last minute. If you use sport boat information to decide where to go on your own boat, please remember to be courteous and give the sport boats plenty of room when you’re out on the water.

The calico and sand bass bite continues to improve and we’re even starting to see some early spawning fish. My friend Chris Lilis was fishing near the breakwall in Long Beach when he ran over some bass marks away from the structure and stopped the boat. Both he and his fishing partner Brian Marshall dropped swimbaits and were immediately hammered by big sand bass. According to Chris, the fish were in the act of spawning and they managed to catch a couple dozen before the tide bottomed out. The bass in the Santa Monica Bay are biting like summer is already here. Evan Salvay and Jeff Walker launched out of Marina Del Rey last weekend for a night of bass fishing. They found wide-open action on calicos and sand bass to 8-plus pounds. The fish were keyed in on two distinct patterns, the big bait and the spinnerbait. Evan said that most of their big fish came on the Reebs Bolt Thrower Spinnerbait and the rest came on Sledgehammer Swimbaits.

Further south, the SWBA held its third event of the 2012 Season in Long Beach last weekend. I fished it with my partner Matt Kotch and we managed a 20.32-pound bag of sand bass that was good enough for third place. We only caught eight bass all day and all of them came off small wrecks and reefs in the Long Beach and Huntington Beach areas. I attribute the difficult fishing to the super-clear water on the beach right now. With the clean water making the fish reluctant to bite, we scaled back our presentations and ended up catching most of our fish on the 7-inch MC Swimbaits’ Viejos Series.

I know that most of you that read this column probably don’t fish tournaments, but I learned a valuable lesson during Saturday’s event and I believe it’s worth passing along to anyone that fishes on their own boat: Remain flexible whenever you’re on the water.

We experienced some pretty incredible sand bass fishing in the weeks leading up to this event and had been racking up consistent 21- to 23-pound bags on every trip. The vast majority of these fish had been coming out of the Newport and Huntington Beach areas, so that is where I intended to fish during the tournament.

We raced down to Newport Reef first thing in the morning to a spot where Matt caught a 7-pound calico the week before. But when we got there, things seemed different than the week before. It’s tough to put my finger on what exactly was different — it just didn’t feel fishy. We stuck it out for a few minutes and Matt did manage to get a bite on the 9-inch bait he was fishing, but the bite came from a 13-inch fish.

Realizing that the area wasn’t going to produce, we headed up to Huntington Beach. The area that we planned to fish doesn’t usually get much pressure, you rarely see another boat, but there were at least a dozen teams fishing the area.

The sun was out by the time we arrived at our first spot and we noticed just how clean the water was. Between the boat traffic and the clear water, things did not look good.

Matt suggested we leave and look for some dirty water up around Long Beach. It sounded like the right thing to do, but I was damned reluctant to leave because I knew that the area was capable of producing and I was afraid the bite would kick in after we left and we’d get slaughtered at the weigh-in.

Well, Matt convinced me to make the move and after an hour of fishing and one 13-inch fish in the tank, we threw our game plan in the garbage and went looking. As you can see from our third-place finish we made the right call.

In the end, I’d rather take action and fail than have failure forced upon me by my own inaction.

Just because the fish bit somewhere yesterday, doesn’t mean they will bite there today. And if they aren’t biting, no amount of waiting around or changing baits or fishing harder is going to make them bite. At some point you have to move the boat, even if it’s just to head home. So don’t waste time trying to catch the fish that bit yesterday, go out and find the ones that are going to bite today.

I learned another lesson on Saturday and it was an expensive one that I hope none of you will ever have to endure. Like I said earlier, fishing was tough and we didn’t get an opportunity to cull until late in the day. I’d just caught a 3½-pound sand bass and used it to replace what I thought was our smallest fish, a 3-pounder. When we got back to the weigh-in and pulled our fish out of the tank, I realized that I’d made an error and that our smallest fish, a 1½-pounder was still in the tank. I’d basically thrown away a bass that was a pound and a half bigger than the one I’d kept. So instead of weighing 22 pounds as we would have if I’d culled correctly, we weighed 20.32 pounds and got beat by a winning bag of 20.79 pounds. To make matters worse, Sanderson Farms Chicken, who sponsored the event was doubling the payouts. That single mistake cost Matt and I $2,500 in cash, approximately $1,000 in fishing tackle and a guaranteed trip to the season finale. I’ll never make that mistake again.

I’m heading down to San Quintin this weekend, so expect a little Mexican flair in next week’s column.