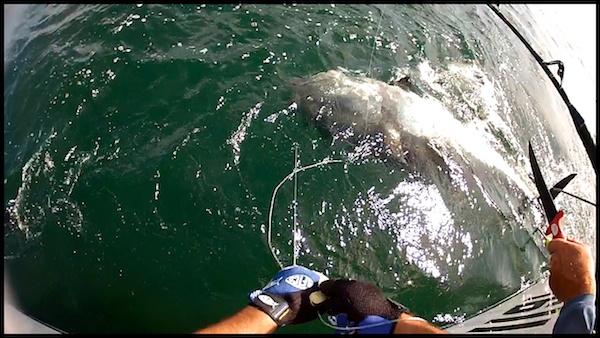 Ok guys, so here’s a quick addition to the last GoPro article. I’ve had several people ask how I like to convert footage shot on my GoPro to the smooth slow motion everyone is crazy about these days. While there are several ways to go about doing this, I am going to focus on a method that involves free software available to all GoPro users.

If you recall from the last article on Setting up a GoPro for fishing, I mention that I like to shoot the camera for slow motion in the 720p 60 setting (60 frames per second). If I have multiple cameras on the boat I typically designate the underwater “pole cam” GoPro and maybe the head-mounted GoPro on this setting. Typically the unique POV these positions capture lends itself to really interesting slow-motion footage.

So what does the “60” have to do with anything?

Bear with me because this can get geeky in a hurry. I found the best way to describe it is to imagine a ball getting tossed up in the air, and then falling back down to the ground forming a motion path resembling an arch. If the duration of this “toss” was one second and you were to take 24 pictures of the ball during this process, you would have the motion captured in 24 steps or frames. If you were to then replay those pictures or frames back as a video at a rate of 24 frames per second (a popular frame rate that produces a “film like” look) the resulting clip would be one second long or “realtime.”

Now imagine instead you were to shoot the same exact “toss” with 60 pictures or 60 fps. As a result, you would now have that motion captured in 60 steps. If you were to simply play this clip back at its native rate of 60 frames per second, you would again have a one second clip that will appear smoother, but not slower at all.

The trick at this point is to take those 60 frames you captured of the ball going up and down, and play it back at a rate of 24 frames per second resulting in a final clip that is 2.5 seconds long or 2.5 times slower. We call this process “conforming a clip,” and here is how you can do it:

First, you need to download and install the free GoPro Cineform Studio Software available for both Mac and PC users. This software will allow you to convert the .mp4 files that the GoPro camera records into .mov files that can easily be edited using your choice of Final Cut Pro, Adobe Premiere, and others. Making this conversion should be one of the first steps to any GoPro editing workflow and, while you are at it, you can slow down all those clips you captured in 60fps for slow motion. 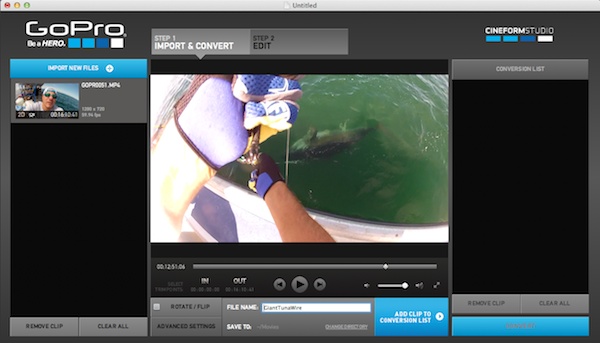 2. Click “Import New Files” and select the GoPro .mp4 files from your card or backup location. 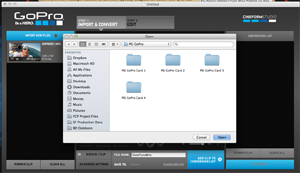 3. Once clips are loaded in Cinerform Studio, note the resolution and frame rate metadata. Remember we are looking for the 59.94 fps (60p).

4. As you select a clip, it gets loaded into the viewer where you can trim the clip’s in and out points with the keyboard shortcuts “i” and “o” as well as rename the clip and specify a directory to save to. 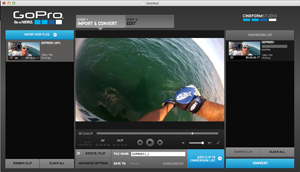 5. Next, click the “Advanced Settings” button to reveal a menu. This is where you specify what frame rate to “conform” the clip to. Set Frame Rate to 23.98p and slide the Quality slider to high and hit OK. 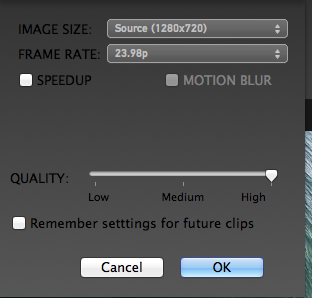 6. Click the “Add Clip to Conversion List,” and then repeat the process for the remaining clips on your card to prepare the “batch” that you will encode at once.

7. Once your batch list is complete simply hit convert to begin transcoding the .mp4 files to .mov files (complete with slow motion conform) that will be ready to go into your favorite editing software.

Now go out and buy a new GoPro 3 Black Edition that records at 120 fps for even more slow motion awesomeness!