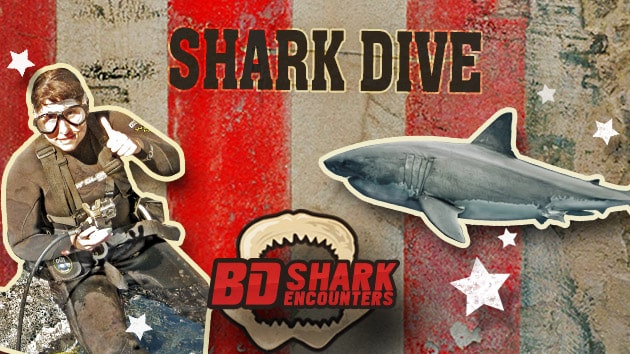 Michelle Gandola, Marketing Director at BD, has spent time fishing and diving in the waters of California and Mexico. During this time she has had several shark encounters.

A:I hooked and handed off a 100-pound mako shark one time and I’ve caught plenty of leopard sharks on my kayak. A:I saw an 18-foot great white and man was it BIG and scary. A:I went on a Great White dive trip on the Islander out at Guadalupe Island. We were there for three days and I was seeing a different shark every half hour. There are so many there and most of them are full grown. I’d say they ranged between 15 to 18-feet. Many of them have names given to them by the scientists at the island that research their behavior. I met the biggest and scariest at the Island, Bruce. He was one bad motha! A:Almost! The same mako shark I handed off was pulled on board the boat. We thought it was dead….but I soon found out it wasn’t after I walked by it and it went after my ankle.

Q:What is your favorite bait for sharks?

A:I don’t target sharks. But if I did I would use Jason from the Bloodydecks office. A:After my trip to Guadalupe Island I can say hands down I have a great respect for the great white shark. They are so cool and way more intelligent than most people know.

A:I don’t like blue sharks because they urinate through their skin and that is just disgusting. A:I would say other than my trip to Guadalupe Island it would be the time I was scuba diving in La Jolla Cove. It was night time and the visibility was horrible. I was trying to catch up to my dive partner who was so far ahead I couldn’t see him. All of a sudden the hair on my neck stood up and out of the corner of my eye I saw a shadow. At first I assumed it was a seal because there are so many around. But to be safe I swam to the ocean floor and tried not to look appetizing. Then it came back! I have no idea what kind of shark it was but it was at least 10-feet. I looked up sharks after my trip and the closest I found to what it looked like was a nurse shark. It didn’t stay by me long, but I will never forget that experience.