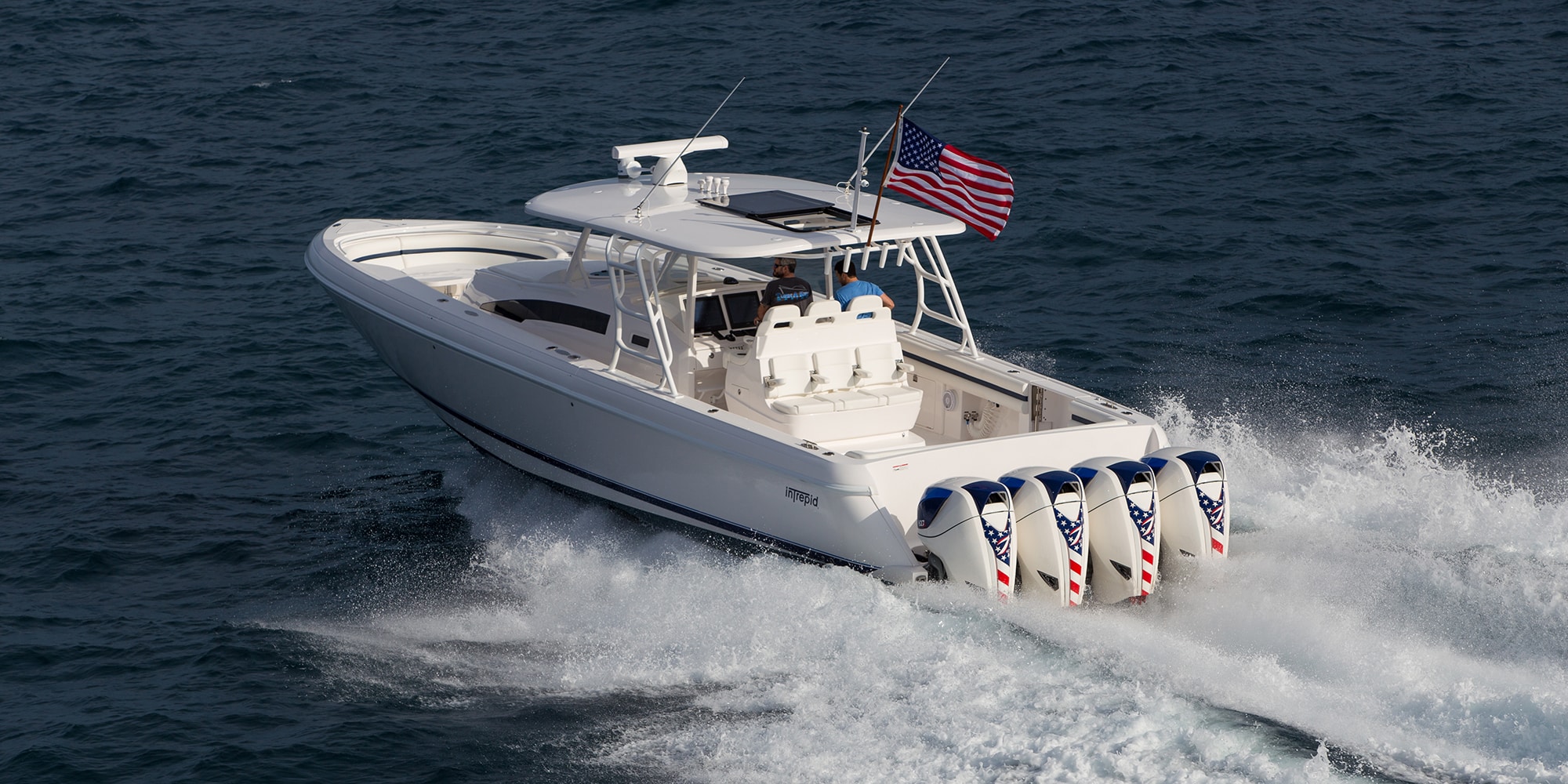 Ever since the first Seven Marine outboards hit the water at the 2012 Miami International Boat Show, these monstrous engines have been causing American boaters to crave more power. Based on the supercharged and intercooled GM LSA Gen4 6.2 liter V8 developed for the Cadillac CTS-V, to call these outboards “unusual” may be the understatement of the year.

This company may have seemed to pop up out of nowhere, but it was actually founded by industry long-timer Rick Davis (along with his sons Eric and Brian), a former Mercury Marine chief of technology. After initially testing the waters with their original 557 horsepower brute that overshadowed the next most powerful outboard of its time by a whopping 207 horses (the Mercury 400R had not yet been introduced, so 350 was the maximum amount of transom-mounted horses you could hope for back then), Seven Marine followed up with an even more potent 627 horse model. Just last year they added a 527-horsepower engine into the mix.

The biggest and latest news regarding this company, however, came last summer when Swedish giant Volvo Penta announced that they were acquiring a controlling interest in Seven Marine. Davis and his sons have retained equity in the company, and he remains the president and CEO. The marriage does seem sensible, since Volvo has extensive experience marinizing GM gasoline engines, the financing to develop new products, and international dealer and service networks.

The smallest (hah!) powerplant produced by Seven Marine is the 527, and like all three of these models, it tips the scales at 1,094 pounds. That sounds like an awful lot until you remember that the power-to-weight ratio is still a respectable 0.48 for their smallest offering. That’s identical to the Suzuki V6 DF350A, not far off from the 0.52 earned by a supercharged Mercury Verado 350, and a hair better than the 0.44 posted by the new Yamaha F425 XTO Offshore. At the 627-horsepower mark, that ratio is an extremely good 0.57.

The engines feature a 90-degree V8 block that, unlike other outboards, is situated horizontally. That leads to some interesting transmission challenges, which are met with a ZF Marine wet disc clutch system. There’s more unusual gearing going on at the other end of the outboard, where Seven offers a choice of lower unit gear cases in addition to the base model. The CR option is certainly the most unusual, with twin contra-rotating propellers similar in function to those found on the Suzuki DF350A, and a choice of 1.75:1, 1.61:1, or 1.47:1 gear ratios. The CT option is a more common single propeller application and is designed for maximum speed, available in 1.47:1 and 1.61:1 ratios.

Maximum rpm for these engines is a reasonable 6000, which is reassuring considering that some manufacturers raise their horsepower rating by boosting rpm above that which is normally thought of as acceptable for long-term wear and tear. Plus, the engines will run on 89 octane fuel as opposed to being limited to the high-test required by some other engines to attain their peak horsepower ratings.

Other big-ticket features that are built in include hydraulic power steering, power trim and tilt, and stainless-steel headers that are just plain bad a** looking when you remove the cowl. Opt for the Spectrablade integrated LED illumination, and these engines have an unmatchable look when that cowl is still in place. In fact, most Sevens also hit the water with custom paint jobs designed to match the boats they’re powering. This may be uncommon with smaller outboards since it’s a significant expense, but in the case of these engines – which regularly break the six-figure barrier after accounting for options and rigging – a few extra grand here and there is moot. Irony Alert: The entire Cadillac CTS-V this engine comes from MSRPs for less than the average cost of the outboard.

So aside from some remapping in the ECU, what separates these three different models? There are a number of notable internal part changes that are necessary to generate the extra ponies present in the more potent versions. The intercooler is enlarged, different exhaust valves that can withstand higher temperatures are used, and the cylinder heads are modified, among other things. In fact, there are so many different pieces-parts used in these engines – and so many marinizing tasks to be performed – that the first step in turning a GM LSA Gen4 into an outboard consists to large degree of disassembling it.

Just what does all this juice get you? On a Midnight Express 43 powered by quad 627s, you’re looking at a cruising speed of 55 mph and a top-end of around 90 mph. Triples on a Yellowfin 39 get you a cruise in the mid-50s and a top-end of about 80 mph. And on the massive Hydrasports Custom Boats 53 Suenos, quads cruise the boat at 51 mph and top out at 69. Those aren’t speeds that will just rip the sunglasses off your head, those are speeds that will wind-blast the lenses right out of the frames.