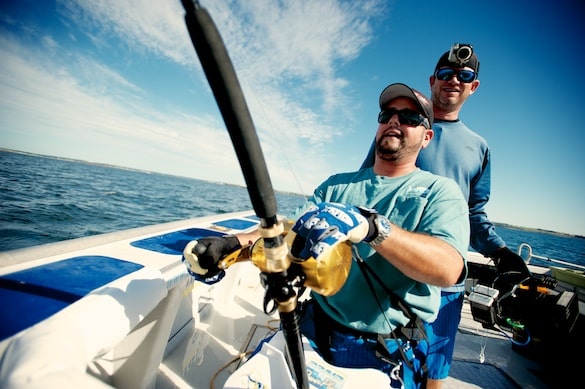 More and more people are showing up at the docks with GoPro cameras these days to capture their own fishing action. With their small-form factor, waterproof housings and numerous mounting options, GoPros are a proven means to get some very interesting photos and video. The only downside of using a GoPro is that the myriad of options and settings can be confusing to the typical angler who is trying to focus on fishing!

Here are a few basic tips for setting up and shooting with your GoPro cameras to capture great fishing footage.

1. The More Cameras the Better

It’s a good bet that more than one person on the boat will own a GoPro camera. With a little coordination among your friends and some creative mounting ideas, you can capture the action from multiple angles, which will give the person editing the video various options to tell a more interesting story.

Let each person be responsible for bringing their camera each day with freshly charged batteries and emptied SD cards. I prefer to use large 32-GB, class 10 SD cards that allow for long record times and fast write speeds.

A few well-placed GoPro cameras can turn your boat into a multi-camera studio, sure to catch the action from multiple perspectives.

Figure out a few different locations to mount the various cameras to cover the action, including a wide-cockpit view, a head-mounted POV view, an underwater cam attached to the end of a gaff or painter’s pole using the Roll Bar Mount, and another loose camera that can be used for handheld shooting. On the handheld unit it is best to use the optional LCD Backpack, which allows you to see what you’re shooting and frame the shots better. At the end of each day, securely backup the day’s footage and recharge the batteries for the next day. Regardless of how much remaining space an SD card may have, backing your footage up and starting fresh each day eliminates the risk of loosing a camera with multiple days worth of footage on it. I can tell you from countless Spanish Fly shoots that sacrificing a camera to the fish gods does not help your catch and can be disastrous if valuable footage goes down with it. While I can go off on a technical tangent of what each of these resolution settings means and offers, I think I’ll just let you know what I typically run with.

While 1080p is the highest resolution these GoPro cameras will capture, I typically like to do a mix of 1080p and 720p / 60 fps settings. The advantage of running the camera in the 720p / 60 fps (frames per second) setting is that you have the ability to derive smooth, slow-motion shots from the footage during the editing process.

With that said, if I’m working with multiple cameras, I typically setup the underwater camera, and the head-mounted POV camera in the 720p / 60 fps mode. This will allow me to slow down the dramatic underwater shots, as well as the fast action typically captured on the head-mounted camera while the angler fights the fish, or the mate grabs the leader on a big fish next to the boat. I usually keep the wide cockpit camera and handheld at 1080p / 30 fps.

The GoPros all ship with a waterproof housing, but it’s imperative to purchase a “flat lens” housing if you plan on doing any underwater shooting. The stock rounded lens does not allow the camera to properly focus underwater, resulting in an image that is not as sharp. There are numerous flat lens options available from Eye of Mine, Backscatter, and recently GoPro themselves.

I prefer to use the option offered by www.backscatter.com because it uses a scratch-resistant glass element and also offers the ability to attach filters such as polarizers and underwater red filters.

Without a flat lens housing, the GoPro will not focus when shooting underwater. 4. Use the Handheld Setup to Cover the Action WIDE-TIGHT-MEDIUM

Hard-mounted, head-mounted, and underwater cameras offer great point-of-view perspectives, but having a portable handheld GoPro with an LCD backpack lets you cover the action with constantly changing shots.

If someone on the boat is available to run this handheld camera they should cover the action and shoot the scene thinking in terms of wide, medium, and tight shots. During the course of the fight you should cycle through different shots starting with a wide shot, then move into a closeup of the reel screaming, then pull out slightly to a medium, waste-shoulder-up shot of the angler cranking down and then repeat the process varying the shots but keeping with the WIDE-TIGHT-MEDIUM order. By doing this, a video editor will always have a cut point to make the scene really feel like a camera crew is there covering all of the action!

5. At the End of a Trip, Gather All Footage from Various Cameras and Back It Up!

For everyone’s sake, you’ll want to back up all of the footage. Better to be safe than sorry.

Check back for more articles about converting the GoPro footage for slow-motion video and using wi-fi remotes to simultaneously control multiple cameras with one button.

Setting Up GoPro Cameras for Fishing