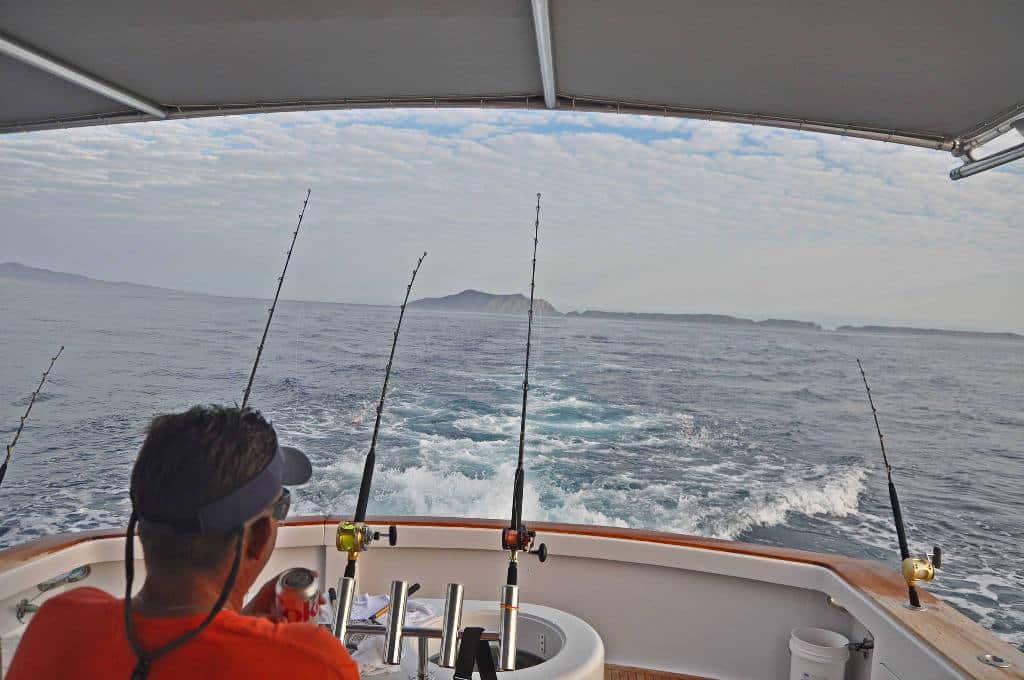 How To Set a Marlin Trolling Spread

A few weeks ago, I fished the Balboa Angling Club’s Master Angler Billfish Tournament aboard the Good Karma. My job on the boat was to work the cockpit and tend to the trolling spread during our three days of fishing. Never having fished a marlin tournament, I had no idea what to expect, but I figured if I paid attention and listened I’d pick things up pretty quickly.

That plan pretty much went south within the first few minutes of trolling. Despite having three guys working the cockpit, I was caught momentarily alone when Captain Shawn Morgon yelled something from the fly bridge. Picking up the hand held radio (the boat is too large to communicate without one), I asked him what he wanted. “The short rigger is running all f****d up! It needs to come in and be let back one foot” he shouted in response.

Having no idea what he just said, but clearly understanding that he was extremely displeased with how one of our lures was positioned, I went to what I assumed to be the short rigger and began to wind it in. The radio crackled, “What in the hell are you doing?”. Responding that I was winding it in like he asked, my old friend let out an exasperated sigh and said, “Just leave it alone and go get Bobby or Decker”.

Once Jimmy Decker and Bobby Lienau got back on deck and I’d gotten them up to speed on what Shawn was yelling at me about, Decker tended to the errant lure and Bobby said, “I guess we should have explained this earlier”. What they spent the next few minutes explaining made sense, but it wasn’t until the third day of fishing that I completely grasped the significance of the minor tweaks that our captain would occasionally shout down from the fly bridge to demand.

Our boat was running a five rod trolling spread and two teasers, which appeared to be the standard spread for boats fishing that tournament. A few of the smaller boats were running a three rod and one teaser spread. Whether you’re running a five or three rod spread, the lures and positions will remain the same. Here is a breakdown of the trolling lure positions in the photo.

In a nutshell, the starboard side of the boat is called the short side and the port side the long. There’s no reason you couldn’t switch those up, but starboard short and port long seems to be the standard when marlin fishing. Staggering the lures in the spread allows the boat to make tight turns while trolling without worrying about tangling the trolling lines.

One thing to note when trolling is that distance is measured in wakes. Since each boat throws a slightly different wake, it’s important to position those lures according to the wake rather than according to a specific distance behind the boat. On our trip we ran a squid chain teaser off each corner. I’ll be honest, these things were running so close to the transom that I thought they were a waste of time, but Bobby cautioned me to keep a close eye on them because they’re often the first thing the marlin will go to. Turns out Bobby was right and our first fish came up on the port teaser and of course I wasn’t paying attention and got yelled at again.

Both the long and short corner baits are running in the prop wash, so you’ll want a lure that has an erratic action and makes a commotion. We ran both plungers and angled heads in these positions. Our long corner was run five wakes back and our short corner four. The outrigger baits should be positioned to run right where the sides of the wake turn into clean water. In these positions we ran baits that would pop every five seconds or so. The position of these lures was much more critical than the corner jigs as they were in clear water next to the wash and needed to swim naturally. Our short rigger ran seven wakes back and our long ran eight.

The final lure in the spread was the shotgun or stinger. We ran a few different lures in this position, both with and without a bird in front of them, but they all had similar swimming actions to the lures we ran in the outriggers. This lure should be run at least a couple wakes past the long rigger. Here are some tips I learned during my 36 hours of staring at the prop wash.

The rougher it gets, the further back you need to run the jigs. If one of your jigs is popping out of the water because it’s too rough, you’ll need to move it back. But if you do that without moving all of your other jigs back, your lines will tangle when you make tight turns.

Don’t run more lines than you can quickly clear. The first morning of the tournament, there were lots of sleepers up and every time we’d run for one, I’d have to clear the lines while the others got ready to cast a bait on the fish. It turned out to be almost impossible for one person to clear five rods an two teasers, so we downsized our spread to the two corner rods and the teasers. Don’t have gaps in your spread. However far back you’re running your jigs, you want there to be a jig running on almost any wake. That way if a marlin swims across your stern it’s going to run into a jig. If you’ve got big gaps in your spacing, you’re not fishing effectively.