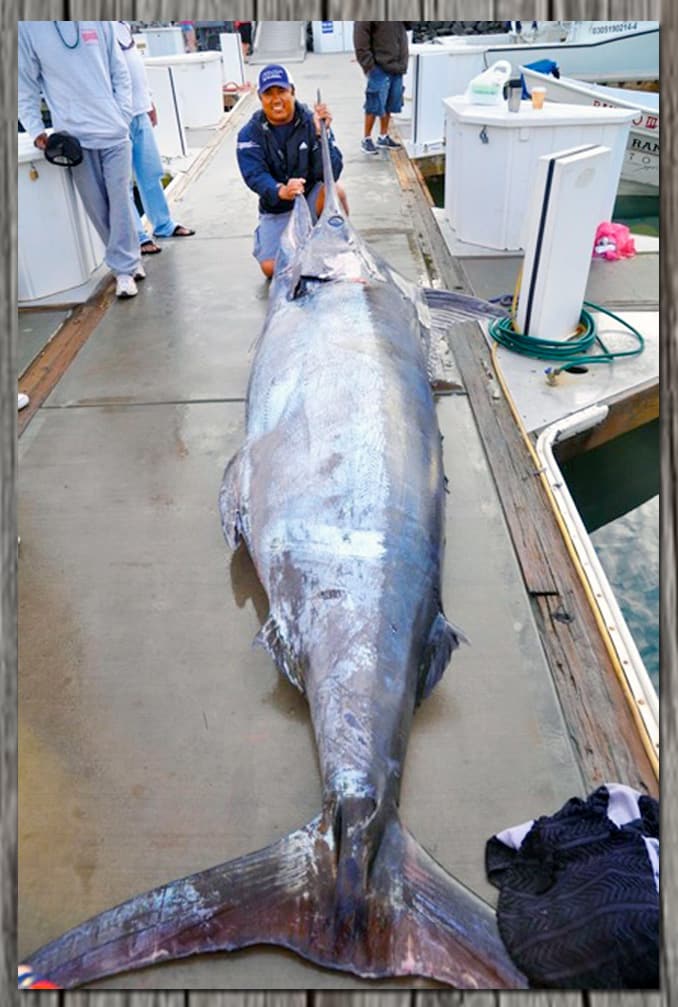 Most of the world focused on the epic impending battle at the Super Bowl in New Orleans while two senior couples from Phoenix, Arizona, Sergeant and Sandy Snagirett, and John and Edie Rayno headed out aboard “Ziggy” a 34-foot Luhrs on Saturday morning, according to Capt. Manuel Dominguez.

The four anglers departed from the Los Cabos Marina hoping for a nice day catching yellowfin tuna. By midday, they had accomplished their goal and were ready to return to the Marina. 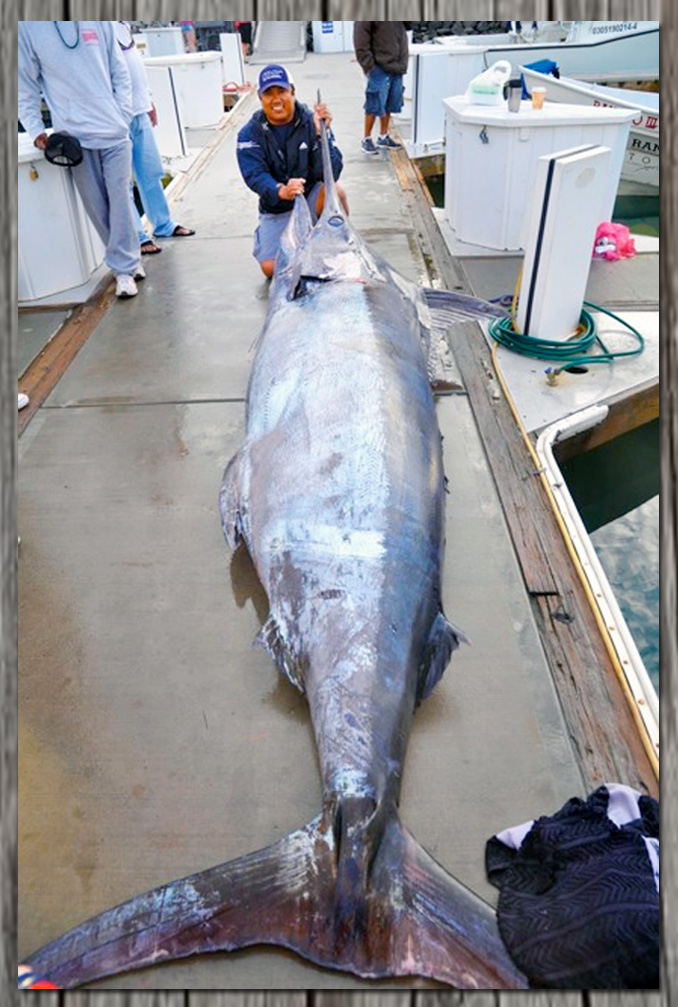 At 1:20 p.m. the “Ziggy” set course for home and was nine miles off of Cabo when the starboard rigger shook and rattled and the line attached to a large homemade flying-fish shaped lure snapped out of the clip with a loud pop. Trolling in the midst of a large school of porpoise, the Captain assumed it was a large tuna and he slowed the boat as one of the anglers removed the rod from the holder and commenced to fight the unknown fish.

Nearly an hour later a giant billfish — large enough to swallow a whole tuna — broke the surface as it frantically tried to throw the hook embedded in the corner of its mouth.

“I thought it was around 800 pounds because I’ve caught two around that size before,” Dominguez told Tracy Ehrenberg, general manager of Pisces Sportfishing, who was first to blog about the catch.

The old timers first took turns battling the huge fish, then the crew took turns as the sun dropped below the horizon. Concerns that sharks would attack the hooked monster were overshadowed by the Captain’s worries about fuel as the monster fish towed the boat farther out to sea.

Reaching for his cell phone, Dominguez contacted Pisces Captain Julio Castro, who along with a few friends made a run to the nearest gas station and then hightailed it out aboard Pisces cruiser, the Tracy Ann. The fresh crew met up with Ziggy, leaped aboard with the fuel and took turns at the rod for several hours before remembering they were expected to play in a soccer match.

Finally, Capt. Dominguez took the rod and fought the marlin until it was alongside the boat. His crew promptly gaffed and secured the billfish with ropes, but determined it was much too large to be brought aboard, or even draped across the stern swim step. (It remains unclear why the fish wasn’t released.)

They tied the head of the marlin to the swim step, leaving the body dangling in the water during the four-hour ride back to port. The scale was closed and everyone was too tired at the end of the 16 hour trip, so they hired a watchman to guard the monster which was left lying on the dock until morning.

At 8:30 a.m. Sunday, the marlin scaled at 987 pounds. Many questioned how much weight it lost while lying on the concrete dock overnight. Consensus was 10% of its body weight, which means it would have easily topped 1,000 pounds when caught.

Regardless, it remains one of the top five or six heaviest marlin ever caught at Cabo San Lucas, and it’s undoubtedly the heaviest ever brought into the dock by four seniors from Arizona.