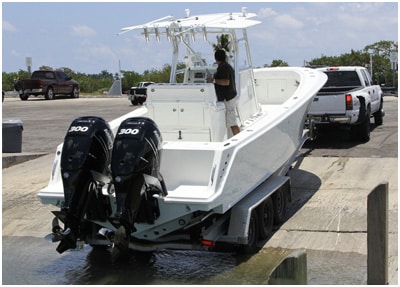 The best way to get a feel for any boat is to visit the production plant and see the building process with your own eyes. You can tell a lot about the company by looking at the little things that end up making a big difference. What might seem insignificant, such as wiring supports, hardware, pump access, the amount of insulation in a fish box or a million other minor details all add up. The good builders treat every element the same — no matter how big or small.

When given the opportunity to test a 32-foot SeaVee center console powered with twin 300-hp Mercury Verado outboards, I showed up early and got a full tour of the production facility in Miami, Florida. Simply put, I was impressed in every facet of the construction and performance of this vessel.

SeaVee is a factory-direct builder so they deal with each customer on a one-on-one basis, and the buyer works with the company to pick out the options they want on their new ride. The 320 series comes in an open center console or cuddy-cabin layout with a cabin and v-berth forward. For power, you can elect twin outboards (the company recently reconfigured the transom to accommodate twin outboards up to 350-hp each) or a single diesel inboard.

The SeaVee 32 Center Console Offshore Fishing Boat is a popular model with the south Florida fishing sect because of the boat’s ride, versatility, speed and the fact that you can still trailer it rather easily. We actually trailered our test boat right from the factory to Haulover Inlet and launched her with just two guys — very painless for a boat of this size. These same attributes are gaining attention in other parts of the country and SeaVee is continually growing its customer base.

There are plenty of boats on the market that offer a high top-end speed, but I’m more interested in a boat that can safely reach those speeds in a range of sea conditions. The 32 SeaVee delivered. After leaving the ramp, we made our way to the Intracoastal and as soon as we got out of the no-wake zone, we opened her up. The 32 shoots out of the hole and comes up on plane in less than five seconds. You never lose visibility as the bow rises to come up on plane. As a matter of fact, the bow hardly rises at all. It just gets up and goes. But you better hang on because the power of the Mercury Verado engines will really push you back. It took a minute to trim her out just right but we hit 59 mph at 5,900 rpm.

As we got closer to the inlet, Ariel Pared, one of SeaVee’s owners who was along for the sea-trial chose to motor over a shallow-water shoal outside the channel to shorten the time to the inlet. The water was amazingly clear and I thought for sure we’d hit bottom as the depth sounder read between 2 and 5 feet of water. We trimmed up the engines and slid by without a scratch. This boat draws less than two feet of water! Yet another feature that adds to its versatility — you can go just about anywhere.

Conditions were perfect for a boat test — a 3- to 5-foot chop kicked up outside the inlet with the waves just a second or two apart. With its sharp entry and deep-V design, this boat ate up the head sea. We cruised at 40-plus mph right into the waves and the boat loved it. You hardly needed to hold onto the steering wheel, she stayed straight and true. The boat motored over the tops of the waves for a soft ride considering the speed we were cruising at. We tried running into a quartering sea and a down sea but none of the sea conditions had much of an effect on how the boat ran. The only spray we got was on the quartering sea when the wind pushed the spray up onto the windshield.

Drifting in the seas was soft and uneventful, making the boat a perfect platform for kite-fishing, chumming, bottomfishing or just about anything. Trolling speed yielded a light wake with clean alleys to present your lures.

SeaVee boats are built by fishermen, and it shows. “We want to catch more fish, and we want our boat owners to catch more fish,” says SeaVee’s Ariel Pared. “To do that, our boats must be able to run longer in rough water, get to the fish first and have a layout that makes fishing more effective. It’s not a slogan, it’s our philosophy and build criteria.” The 9-foot-plus beam provides plenty of fishing room, especially in the bow area. The sailfish boys love this boat come tournament time because you can get to the fish fast and easily set one kite off the bow and another one off the stern. Add in one or two free-lined live baits and you can fish 10 or more baits without a problem.

As each SeaVee is built to the customer’s taste, the fishing features are literally endless. The company will install up to three livewells in the 32 with one in the bow, one in the rear deck and one in the transom. SeaVee installs a unique pump box that houses all of the pumps in one convenient location with just one thru-hull for the intake. SeaVee builds the pump box itself, along with just about everything else on the boat.

You can choose from several different layouts for the drawers and hatches in the leaning post. The tackle center on our test boat’s leaning post really impressed me. On top is a drop-down storage hatch for quick access to pliers, gloves, rigging floss, etc. Below that two doors house a series of plastic tackle trays on one side, and a drawer made to perfectly hold half-pound spools of leader on the other side. There is even a small lip on the top hatch so you can drop it down and use it to rig your gear without the tackle trays sliding off. Below the tackle drawers is a Frigid Rigid fiberglass cooler on a rail system that slides aft. When you pull the pin it gently glides back and let’s you get a drink. When done, slide it back underneath the post, drop the pin back in and it stores out of the way.

There’s tons of rod storage on this 32. You can get up to 18 rod holders in the console alone. Then there’s more in the leaning post, and the rocket launcher on the T-top. SeaVee will also install reinforced rod holders up and down each gunwale, giving you the option of bringing your entire arsenal of rods with you each time you leave the dock.

As for fish boxes, the insulated box in the bow is massive and serviced with a diaphragm pump. You can also elect for an optional box aft or a coffin box up front. There’s dry storage in the console, as well.

The test boat featured a new center console design with a forward pneumatic door that slides to the side, providing access to the space inside the console. There’s room for an electric head underneath, as well as access to the panel and wiring, and more storage space. The captain has complete, 360-degree visibility from the steering wheel at all times for smooth operating. The helm itself offers enough room to mount two 12-inch side-by-side monitors behind a clear, lockable splash-proof lid with space left over for a VHF, stereo and more. The Mercury Eco Gauges displayed all the running info you could want such as RPM, gas consumption, speed and even optimal loads. But I have to admit — it got a little annoying each time it told me to slow down. This boat is made to run!

SeaVee uses small LED lights recessed into the hard top to give you plenty of light when fishing at night, and they can mount them under the gunwales and thru-hull as well. SeaVee will also install recessed teaser reels in the hard top, outriggers and more.

The tunes on the test boat were serious. I lost count of the JL marine speakers and subwoofers. When we cranked up the stereo, we definitely turned a few heads. Again, SeaVee leaves all of that up the consumer so whatever you want, you shall receive, and that’s what this company is all about. They deliver a solid, high-performance fishing boat using the finest construction processes available and let the buyer pick and choose exactly what they want to make the boat their own. If you don’t believe me, go take a tour of the factory or sea-trail one of their boats and you will see it firsthand.