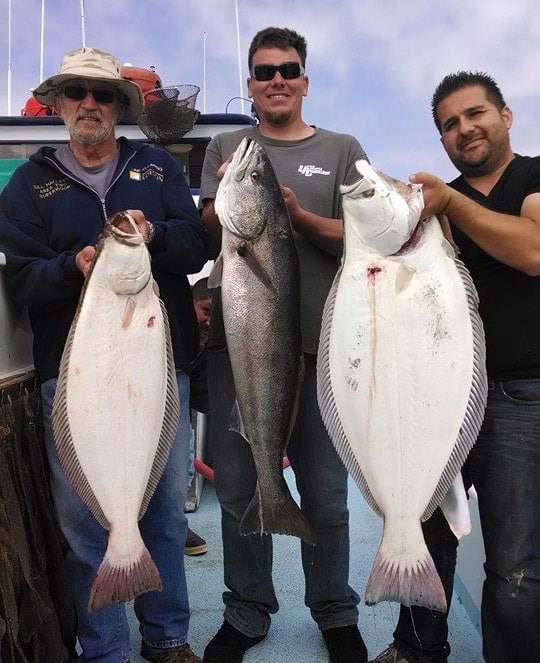 The word on the tuna scene south of San Diego is that there are a lot of fish being seen but they just aren’t biting. Several boats ran 1 1/2-day trips over the weekend and scored just a handful of tuna to go along with scratchy yellowtail fishing on kelp paddies. I’m not exactly sure why the fish didn’t bite over the weekend, but I’d venture a guess that Friday night’s full moon had something to do with it. If it was due to the lunar cycle, we can look for this bite to improve in the coming days. The yellowtail bite at the Coronado Islands has slowed in recent days, but sportboats are catching at least a few fish every day. This slow down is due to the fish being keyed in on the squid that’s moved in at the islands and along the coast off Tijuana. The good news is that the squid, which moved in to spawn during the full moon, should be gone again soon, allowing the bite to get back to normal.

Moving up the coast, calico bass are making up the bulk of the catch for 1/2-day boats from San Diego to Dana Point. While most of these bass are short of the legal limit, it makes for a fun day of fishing. If you’re planning to go on one of these trips, make sure and bring a rod that will flyline an anchovy. The barracuda bit full speed on Wednesday for sportboats fishing out of Long Beach and San Pedro.

These fish have moved into the Horseshoe Kelp and are readily biting the surface iron. So, if you’re a sportboat fisherman, it’s time to grab your jig stick and jump on your favorite half-day boat. Private boaters looking to get in on this bite should look for bird schools that are outside of the sportboat fleet. It’s okay to use the fleet to locate the approximate area of where the fish are biting. But once you get there you’re going to want to drive a quarter mile away and try to find your own fish. These untrampled schools will not only bite better than the ones everyone else is fishing, but you have the added advantage of not having to deal with the seals. The calico bass bite at Palos Verdes remains good for private boaters. The hot ticket continues to be the waxwing or surface iron, but there are plenty of fish being caught on weedless baits fished in the heavy kelp. There are also some yellowtail showing up and my friend John Curry caught a couple up there Saturday while fishing calicos. The pictured fish came on an MC Weedless swimbait and he had another fish in the 12-15 pound range on the waxwing that was released without getting it’s picture taken. So, if you’re heading up to fish bass, always keep an eye out for bird activity that might indicate yellowtail.

The big news this week is the bite happening at Catalina and the Channel Islands. The squid zone on the backside of Catalina has been producing steady fishing on big yellowtail, seabass and halibut for both sportboats and private boaters. If you’re interested in heading out there, you should check out the Thunderbird as they’ve been running trips with an interesting format. The trip starts by fishing the squid grounds at Catalina and once the morning bite is over, they’ve been making the 20-mile run to fish rockfish at San Clemente Island. I like this trip because having a nice nap and then catching some big rockfish beats the heck out of spending the entire day scratching small fish at Catalina. The Channel Islands are producing by far the best fishing on the coast right now. Highlights include the 130 seabass the Ranger 85 had on their 2-day trip this week, plus an almost 60 pound halibut. The Aloha Spirit got a 50-pound plus seabass on one of their trips. With fishable weather predicted for the weekend, I’m expecting more big scores. If you’re planning a trip to the Channel Islands, check out my article on the tackle you’ll want to bring.