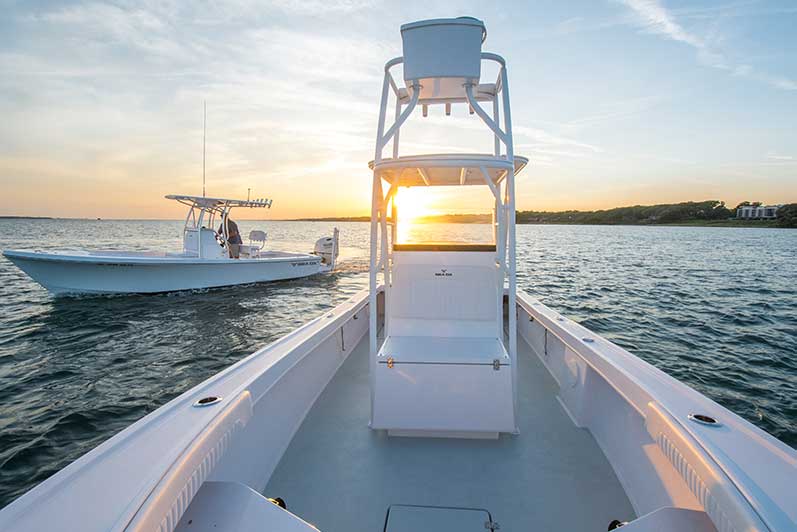 The Sea Ox 24 is a no-nonsense fishing machine with a rock-solid disposition.

In Best Center Console Fishing boats: 10 Traits to Consider the very first item we suggest every boat-buyer consider is construction, and from the moment I stepped aboard the Sea Ox 24, I knew I could check off that box. The tide was out, I had to jump down maybe four feet from the pier. I landed on the deck with a muted thud. So, I tried stamping over a hatch, swinging from the back of the T-top, kicking the console, and lunging against the leaning post. Nothing moved or flexed one iota. In fact, when I tried jumping from the gunwale to the foredeck while slamming my feet down to make the most forceful impact possible, the only things that creaked, cracked, and flexed were my knees.

The Sea Ox is built with a 1.5” thick core in the stringers and transom, layered under 24-ounce bi-axial fiberglass. The hatches are fiberglass, not those flimsy plastic things you’ll see on the vast majority of the other boats this size. The top and leaning post pipework is thicker than expected. And this all adds up to a 4,300-pound boat, which is significantly beefier than most boats this size. Compare the numbers, and you’ll find that the average 24-foot center consoles in the fleet weigh somewhere between 10- and 25-percent less.

Wait a sec – doesn’t more displacement equal less efficiency? Sure it does, and if the Sea Ox were a lighter boat it would be a faster boat. It would also fail to bull aside a two-foot chop without pounding or vibrating, as our test boat did. Besides, with a 300-hp Suzuki V6 outboard on the transom we hit the upper-mid 40s and cruised in the low 30s. Most of us will find this performance more than sufficient, but if your priorities lay with running at eye-watering speeds this boat might not be your number-one pick. If they’re more aligned with charging into a head sea without being beaten to a pulp, however, it’s a winner.

One other performance aspect of the Sea Ox that was as obvious as a waving red flag was its stability. A full-grown adult male stepping from atop one gunwale to the deck, walking to the other gunwale, and stepping back up, isn’t enough to rock the boat or cause it to lean. Credit here goes to the 14-degree transom deadrise and a low center of gravity. And before you start worrying about how well a 14-degree transom is going to cut the waves, note that this boat has a sharp entry and comes rigged with a bracket that extends LOA from 23’9” to 28’1”. That means it runs much flatter than most similar boats, and it’s the entry that does the slicing and dicing.

Fishing-wise, the boat also delivers. It has a livewell with a baby-blue interior and a clear lid in the transom, four flush-mount gunwale rodholders, rocket launchers lining the leaning post and the back of the hard top, and fishboxes in the deck and under the forward bow seats. More important to many serious anglers, the deck is kept wide-open and isn’t cluttered with fru-fru garbage like a built-in grill, a wet bar, or fancy lounger seats. While some boaters may decry the absence of “luxury” items like these, hard-cores will love the no-nonsense nature of this boat. And eliminating all that stuff has another benefit: lower cost. The Sea Ox 24 runs in the $70K range, which is a good $10,000 or more less than most of the competing “fishing” boats that come equipped with stuff like onboard blenders and full-length sunpads. 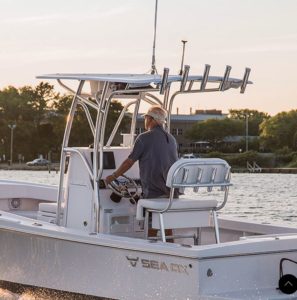 It should be noted that fit and finish is also no-nonsense. You will find that the hatches aren’t gleaming on the undersides, and the deck is painted in non-skid rather than molded with fancy diamonds. If bling is what you’re after, look elsewhere. Again, however, we must point out that this is the sort of thing that adds a lot of cost to a boat – and today’s boat pricing can seem rather astronomical, especially to someone who wants a fishing boat as opposed to a luxury day-boat with a center console design. And, doesn’t it seem like the vast majority of today’s center consoles attempt to cater to every last gentrified whim?

That’s certainly not the case with this boat. The Sea Ox 24 is about as pure and simple it gets, when it comes to modern center console fishing machines.