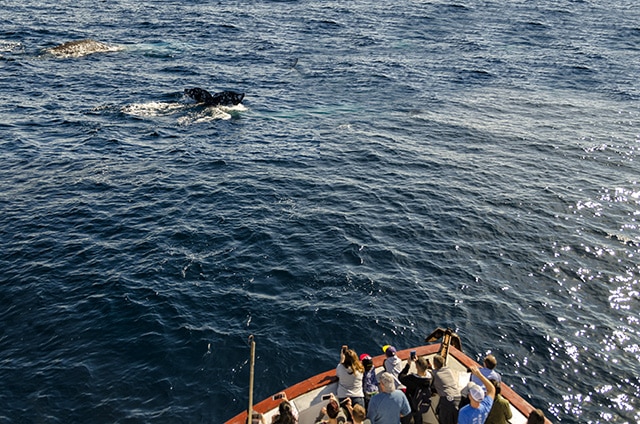 Couples, families with small children, and individuals all shared a common interest in an exciting whale watching adventure last week.

Judging from the number of boats – sail to power, large to small – offering daily trips, locals and visitors alike find going a few miles offshore in search of the majestic giants to be an enchanting experience.

According to local marine biologist and SAC scientific advisor Steve Crooke, more than 20,000 gray whales journey from Alaska’s Bering Sea south to several different lagoons and bays that dot the Pacific Baja coastline. There they usually remain for several months while the females give birth and their calves grow large enough and strong enough for the return trip north. This arduous journey of 10,000 miles is the longest-known annual migratory route for any animal.

Although gray whales usually travel alone or in pods of two or three, sometimes they gather in larger pods during the peak of their migration as they make their way both up and down the coast.

H&M Landing, a pioneer in West Coast whale watching, began offering trips in 1953, according to Captain Frank Ursitti, managing partner of the landing. They expanded and now offer a wide range of trips to observe marine wildlife in their natural environment ranging from a three hour local trip to much longer expeditions traveling to the West Coast and lagoons of Baja California.

Last year, San Diego received the award for becoming the nation’s 21st “Coast Guard City” – the largest metropolis on the list. The award recognizes San Diego’s commitment to erecting monuments to the maritime service, organizing civic celebrations and helping to boost the morale, welfare and recreational opportunities for Coast Guard personnel in the region. 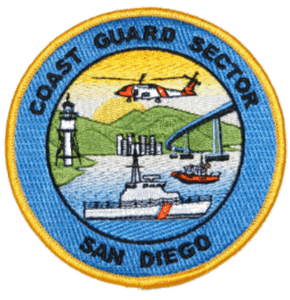 The designation – bestowed by the Coast Guard’s 25th commandant, Adm. Paul Zukunft commandant, with approval from Congress – is awarded for five years at which time it will be re-evaluated.

The anniversary of San Diego’s award as a “Coast Guard City” is February 23. To

commemorate the event. Captain\Owner Chuck Taft of the local sportfishing boat “Legend,” suggested that the Coast Guard host a special whale watching trip for members and their dependents on an extraordinary three-hour excursion. Ken Franke, President of the Sportfishing Association of California, was asked to coordinate the event.

It was decided that for the convenience of the active duty Coast Guard members along with friends and families, the choice was the Saturday at the beginning of the three day MLK weekend.

As it turned out, less than ideal weather and associated fog had plagued the coast most of the week, and the outcome for the day’s outing was in question. 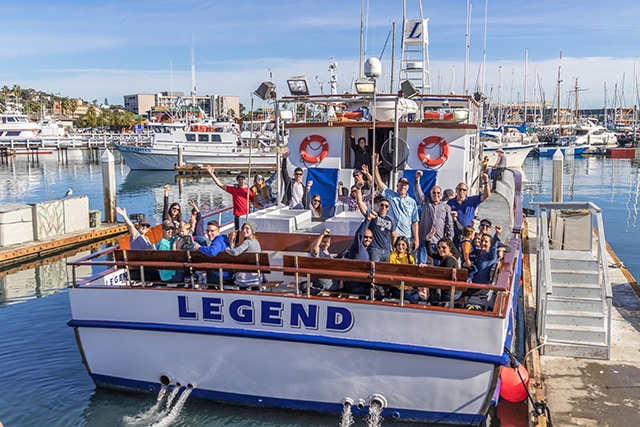 However, on Saturday, the fog had dissipated and cobalt blue skies with barely a breeze greeted the passengers as the group of some 50 men, women and children posed for a photo before departing at 10 a.m.

Engines rumbled, dock lines were cast off and the 75-foot sparkling white Sportboat “Legend” trimmed in navy blue headed into the channel with Captain Taft at the helm.

Second Ticket Patrick Dorety gathered everyone on the rear deck to introduce the crew of Dominic and Anthony Spinuzza, then conducted a safety and vessel information briefing before the captain eased the throttles up to speed.

Cruising out the channel, crew members pointed out sights and described historic 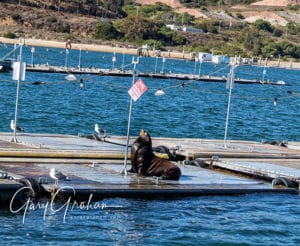 landmarks on North Island and Point Loma, including the Fort Rosecrans National Cemetery and the historic Old Point Loma Lighthouse at the very tip.

Out beyond the whistler buoy, which marks the end of the harbor channel, Taft announced that other boats were already seeing some of the traveling mammoth gray whales; passengers Stephanie and Doug Mittermeier could hardly contain their excitement as they joined the crowd at the rail on the bow. 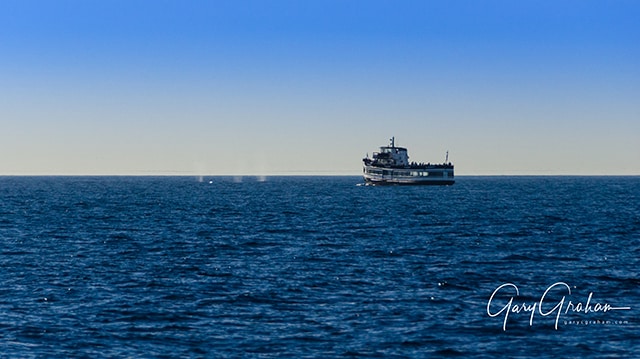 Soon, the fleet came into view, and the bow echoed with the shouts of spectators surprised that they could see them so far away. The whale spouts appeared, gleaming in the bright sun then dissolving into thin air … some singles, some traveling in pairs or even three or four as more and more were spotted by the crowd. (On calm days, gray whales with their unique v-shaped spout can be spotted several miles in the distance. They spout a discharge of air from their lungs through the blowhole, so that it forms a spray at the surface of the water.)

Cody and Colleen, first-timers from Florida, had seen dolphin on the East Coast once before. However, neither had seen creatures this large in their natural habitat. They were awed and said it was both terrific and memorable. 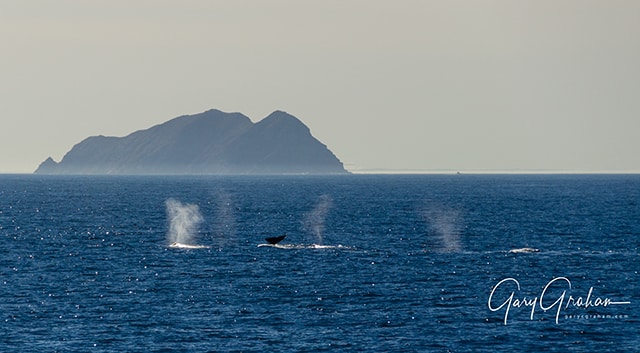 As multiple spouts appeared with the Coronado Islands gleaming in the background, even the porpoise joined in the chase, acting like waterborne escorts to the delight of Sean and Kate who declared, “We were thrilled just to see them spouting in the distance, but it was amazing how fearless they were, coming so close.”

Most of the passengers were trying to capture their awesome experience in photos, recording the creatures surrounding them; some brought their professional cameras competing with others who were using their cell phones and tablets. As the Legend turned down-swell, heading toward shore and the harbor entrance, a pod of three soon turned out to 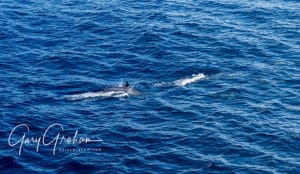 be seven of the gentle giants calmly swimming in a southerly direction.

“Really great!” declared Kay and Kyle as they leaned over the rail to take a photo of a pod of dolphin, their backs gleaming in the bright sun beneath the bow.

Bethany and Doug from San Francisco were visiting friends in the Coast Guard.

“We loved it! The trip was so great. This was our first time, but we will be back!”

The three-hour adventure passed quickly as the boats played “follow the leader” south. Mesmerized, the group stared and took more photos while pointing and crying out as the whale spouts appeared and reappeared on the horizon. 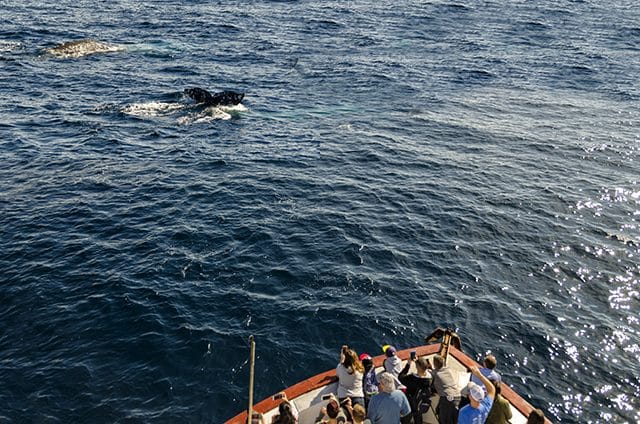 Whales would calmly swim along on the surface for a time before signaling by that telltale flip of their massive tail (flukes) – as though to wave goodbye – while sounding beneath the rippling blue sea, only to reappear a few minutes later.

Zachary and Megan: “Awesome … pretty cool stuff. I serve on one of the Coast Guard cutters, but we never get this close.” 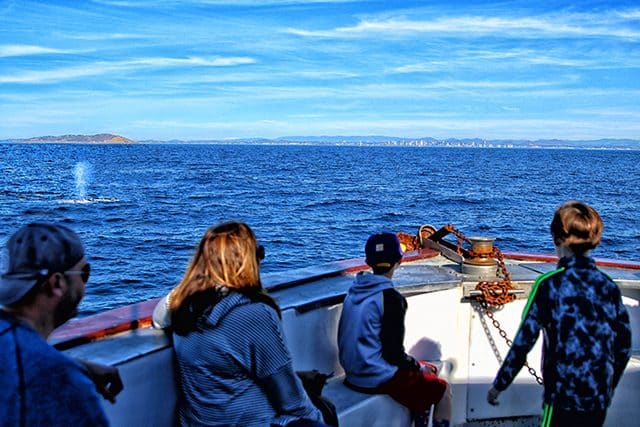 Turning toward home, Captain Taft announced over the PA system: “Today is as good as it gets! It just doesn’t get much better,” he continued with satisfaction. Underscoring his comment, he continued to point out several more groups all the way back to the whistler buoy. 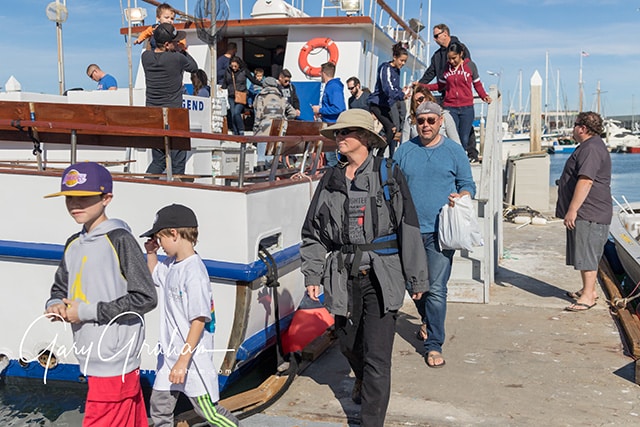 It was a cloudless day without a hint of fog; the most whales seen in a single trip during the fledgling 2018 whale watching season: one of the most popular non-fishing local marine wildlife adventures the fleet has to offer.