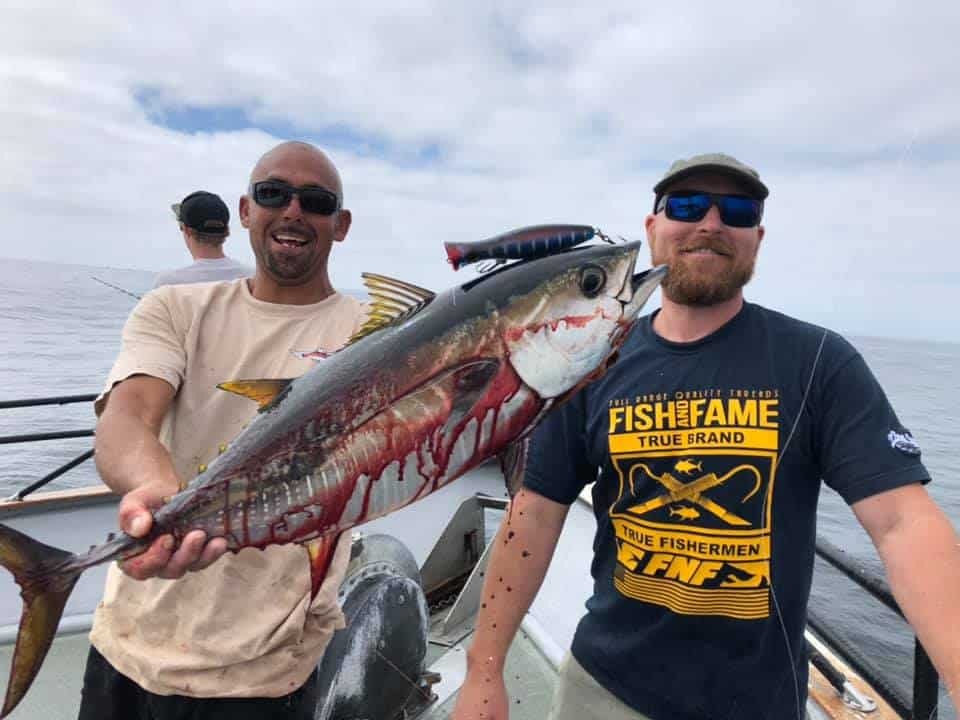 After a bit of a stumble earlier this week, the tuna bite off San Diego kicked back into high gear on Wednesday with almost 2,000 yellowfin showing up in the counts. The bite has been good enough that boats from San Pedro to San Diego are making the run south and most overnight trips are either catching five-fish limits or reporting “limit style fishing” when the bite is wide open but their passengers are incapable of catching them. The full-day boats are getting in on the action as well with the San Diego out of Seaforth Landing and the Liberty out of Fisherman’s Landing scoring 213 and 245 fish respectively for their 45 angler loads. The fishing is good enough right now that boats are actually passing schools off to one another when they’re done, as the Thunderbird out of Davey’s Locker reported doing before making their long-run home on Wednesday afternoon.

Sounds pretty good right? Well, if you’re a private boater planning on making the run down there this weekend, be warned that this bite has spawned one of the worst gang bangs ever. There are sport boats from nine different landings, and on trip lengths from full day to long-range, fishing within a few miles of one another in a zone that’s close enough to the beach that you could get there in any size skiff and that’s just what’s happening. I’m not sure what sparked this insatiable blood lust for these small tuna but based on the reports I’ve heard and pictures I’ve seen, private boaters are leaving both common sense and common courtesy at the dock before making the run. If you find yourself feeling overwhelmed with a tuna frenzy at any point in your trip, I advise against giving in to the urge to drive right up to those fish boiling 20-feet off the stern of that sport boat just because, “everyone else is doing it!”. You’re eventually going to have to look yourself in the mirror once the fishing day is done, so try not to debase yourself too thoroughly. If you’re interested in going out and finding some fish of your own, check out this video tutorial on how to come up with an offshore fishing strategy that will allow you to avoid the gang bang altogether. 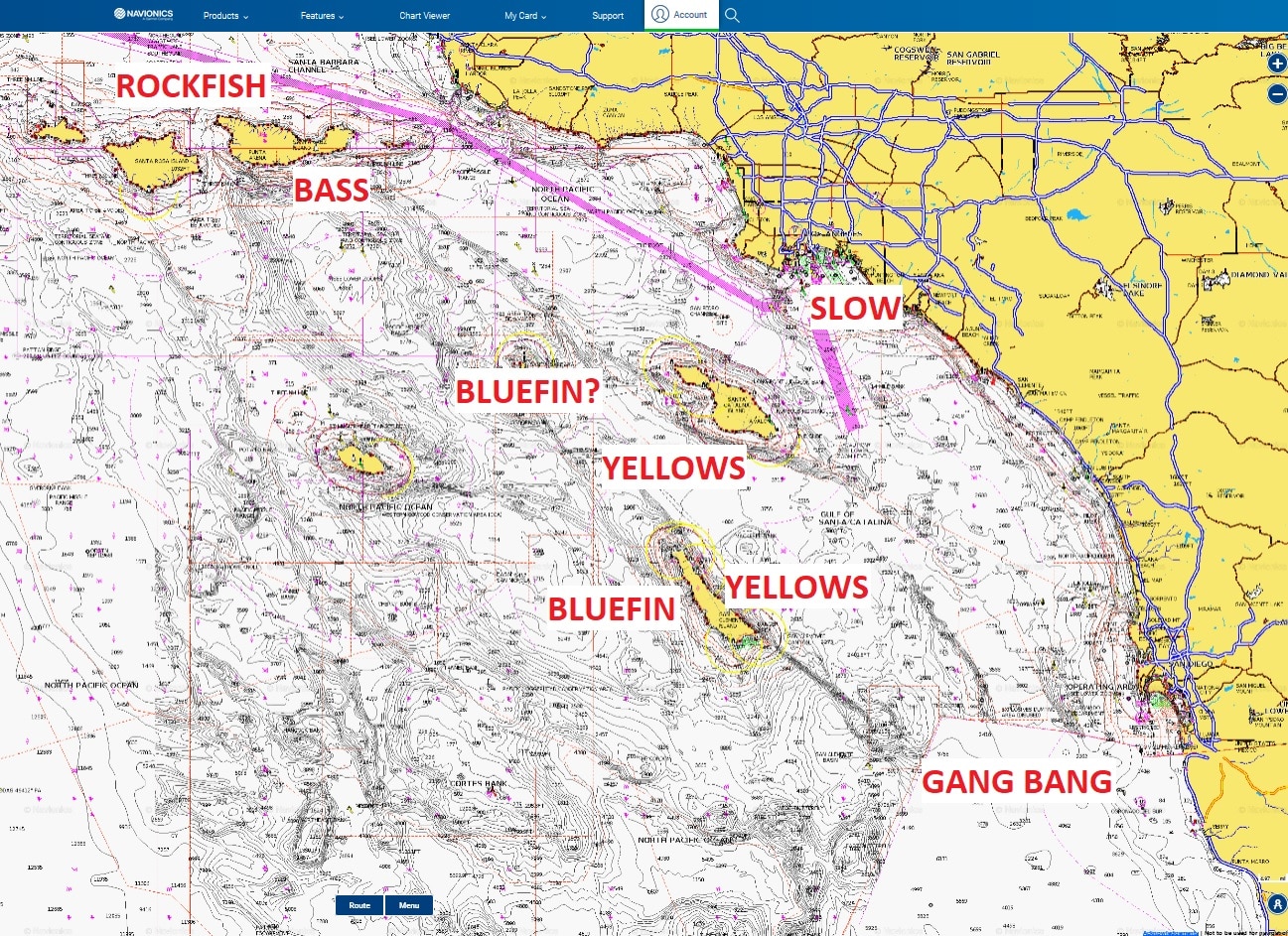 With that out of the way, let’s take a look at this week’s Navionics Chart to see check out our other fishing options. Starting up north, there are still a few yellows and seabass biting at the Channel Islands but most of the action is coming in the form of rockfish and calico bass. Cutting back to the coast for a moment, the fishing along most of it sucks right now. I’m not sure if it’s too much bait or fluctuating water temperatures, but the fishing is not nearly as good as it usually is at this time of year. I fished the beach from Newport to Long Beach on Friday and caught two calico bass and one sculpin. Definitely not par for the mid-August course. 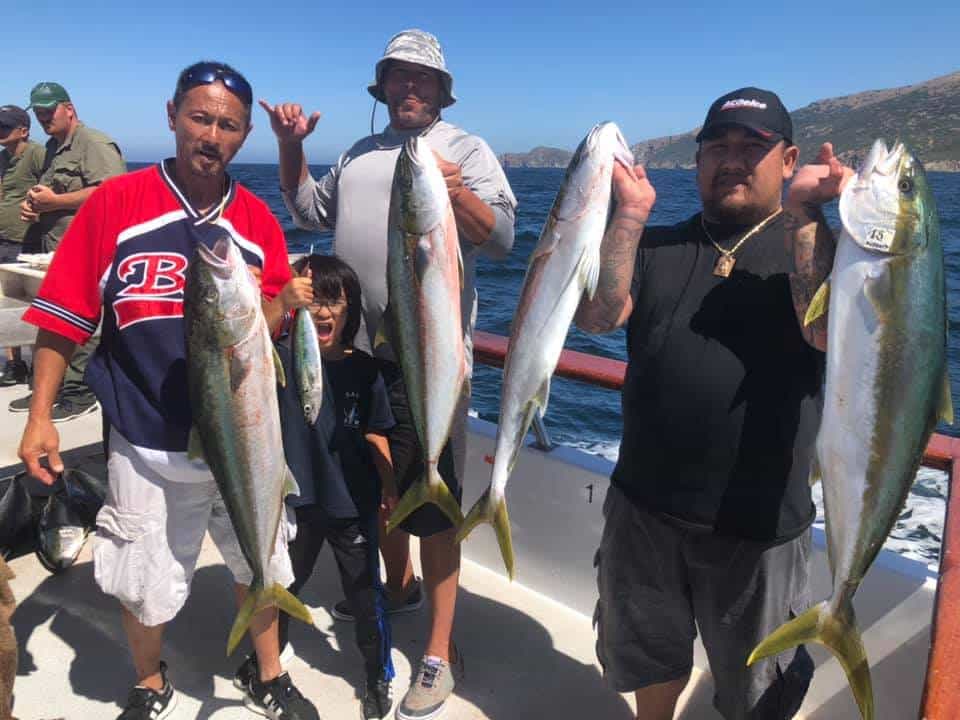 The yellows are biting at both Catalina and the 3/4-day boats have been getting some nice sized fish. The bite isn’t wide open but boats are averaging a handful to as many as a couple dozen fish depending on the trip. The boat traffic at the island has been pretty bad on the weekends all summer, so I suggest getting there early and avoiding other boats. The yellows are scattered around all over the place so I’d spend more time looking for conditions and less time looking at specific spots. Speaking of scattered yellows, there are some at Clemente as well and Matt, Decker and I were lucky enough to stumble into a big foamer of them in 300-feet of water off the frontside on Saturday. The fish were moving fast but we were able to pick off three of them on the surface iron before they went down for good. You can read my full report here. 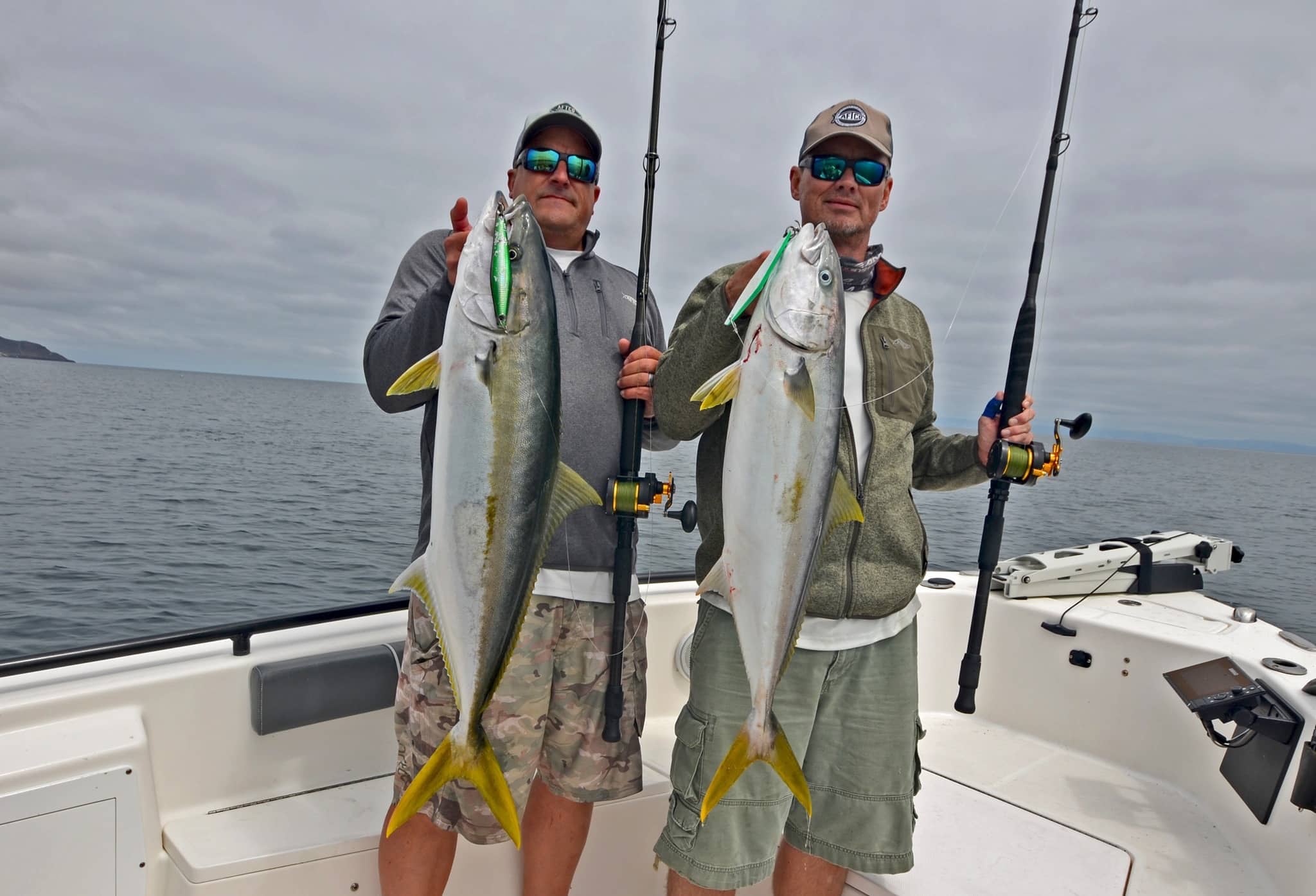 Finally, the big bluefin tuna are still being caught off the backside of San Clemente Island but it’s not a sure thing. Boats did well early this week but, according to Fishdope, the bite was non-existent on Wednesday. There were also some bluefin seen by the El Dorado out of Long Beach Sportfishing on their way home from San Nic the other day and they landed one out of several hookups. While I’m not going to hand it to you on a silver platter, if you’ve been paying attention the last couple years, you should be able to guess where those fish will likely show up next. As for me, I might take a look through that zone on my way to or from bass fishing this weekend. Good luck if you’re heading out and remember to just say no to gang bangs!