We just got wind of the first striped marlin caught by a Southern California boat for the 2012 season. The fish was caught on July 15th.

Capt. Cary Dodson of the 58-foot charter boat Success out of Point Loma found the fish west of the Rockpile. 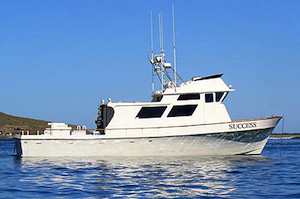 The striped marlin hit a jig, a tuna feather, trolled on an 80-pound outfit. We’re still working on gathering more details as the captain is out at sea for the next few days.

We do know that the angler was Ben Chastain, a member of the San Diego Marlin Club.

According to reports, other marlin were also spotted over the weekend. One party boat reported a marlin in its chumslick while a private boat also saw some fish at the 302.

This is great news for all of the So Cal marlin nuts. The water out there is now 69 to 70 degrees and hopefully the fishing will come together quickly as the striped marlin make their way up the California coast.