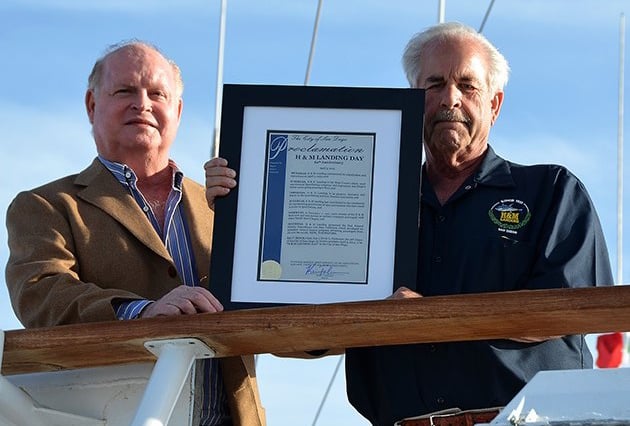 Near the end of a perfect, patented warm San Diego afternoon beneath an eggshell blue sky, a large crowd joined the sport fishing elite, dignitaries and political leaders who made their way down an H & M Landing pier to the 105-foot Red Rooster 3 on Good Friday evening.

The slips on both sides of the dock and up and down the landing were filled with majestic sport fishers of every description.

It was a poignant reminder of how far San Diego’s fishing fleet has come since the San Diego Sport Fishing industry was born on that eventful day – April 5, 1935 – 80 years ago. Captain Andy Cates welcomed the arriving guests as they boarded his luxury sport fisher, greeting one another and sharing an unspoken sense of pride in the industry and what it had accomplished over the past eight decades.

The evening was filled with the presentation of plaques from respective agencies acknowledging and recognizing H & M Landing’s pioneering role in the sport fishing and eco-tourism industries along with its innovation and leadership. Farrior praised the fleet for their service during World War II – beginning December 7, 1941 – when part of the fleet was placed into service as military transport and supply craft. Plus, the fleet had pioneered the first Natural History Expeditions into Baja California, which developed into an extensive natural history program attracting passengers from around the world.

Ken Franke, President of the Sport Fishing Association of California, reflected on the significance of H & M’s influence under Lobred’s tenure to the industry in San Diego and beyond.

To a spirited round of applause from the guests craning for a better view of the speakers up top, Franke introduced one of the founding families, Ralph Miller and his children. Miller briefly recalled how Lobred and his wife Judy arrived one day in 1979 from Alaska aboard their 50-foot trimaran. “I was looking for a carpenter, and Lobred filled that role. He went on to be dock supervisor, then general manager before buying a share in the landing.” Miller then called his son Bob and his daughter Catherine to join him as they presented Lobred with an engraved plaque, which read: “Phil Lobred, H & M Landing Artfully Manning the Helm. Through Calm and Storm 1978 – 2015.”

The brass plaque was placed on a ship’s wheel as a token of their admiration and esteem for his 36 years with the company and service to the San Diego Sport Fishing Fleet.

Lobred responded, “Ralph Miller’s guidance over the years was essential. He willingly shared his knowledge about sport fishing from the very beginning.” Continuing, “My wife Judy found sport fishing fascinating and enjoyed being on the boats. She earned her 100-ton Coast Guard captain’s license while assisting with the H&M’s natural history voyages to whale-breeding grounds in Baja, another innovation started by the landing when Ralph Miller, Jr. secured permission from the Mexican government.” Wrapping up the evening with a champagne toast led by Celebrese, the guests mingled, reminiscing, recalling their personal remembrances and exchanging stories featuring H & M and Lobred. As Merit McCrea, saltwater editor for Western Outdoor News and Ed Zieralski, outdoor writer, U-T San Diego, notepads in their hands, moved from group to group, joined by John Cassidy, Rod & Reel Radio, with microphone in hand, recorded sound bites for his show.

Later that evening, in commemoration of the very first trip of the newly-formed H&M Landing on April 6, 1935, Captain Chuck Taft‘s sport fishing boat, Legend, ran an overnight trip to the Coronado Islands. On that first trip aboard the Mascot No. 2, 35 anglers brought 136 yellowtail to gaff.