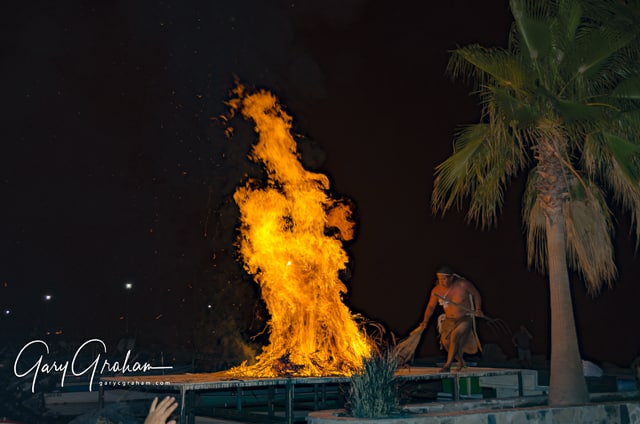 In early June, Ken Franke, President of Sportfishing Association of California (SAC) invited me to join him and the SAC team of Edwin Reyes, Pete Gray, and Rick Cutler, along with Celia Conditt and Captain Art Taylor of Searcher Sportfishing, to visit Loreto BCS.

It was at the invitation of Andrés Córdova, Secretary of Fisheries for Baja Sur who was convinced that the community of Loreto BCS had benefited from S

Last year’s radio broadcast, mirroring others in various locations throughout Baja and Mexico mainland, had received positive praise from the local fishing and business communities as well as from local government officials.

This year proved to be a special weekend as it featured the 6th Gastronomic Festival of the Almeja Chocolata, (delicious chocolate-colored clams found only in this area), the Yellowtail Tournament, and the live broadcast of Pete Gray’s “Let’s Talk HookUp” on 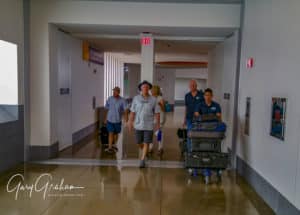 Saturday morning which followed the flare gun start at dawn for the tournament.

Once again, the Cross-Border Xpress (CBX) was our preferred port of entry. In less than 45-minutes, we were at the Aero Calafia gate awaiting our flight, demonstrating why CBX was an instant success when it opened in 2015.

Slightly over two hours later we were on the ground in Loreto BCS where Gonzalo Alamea, Tournament Coordinator and Cesar Angulo, FONMAR, whisked the team up and delivered them to the Hotel La Misión, a stunningly elegant 70-room hacienda-style hotel with a contemporary European/Mexican flavor managed by Maria Gámez. 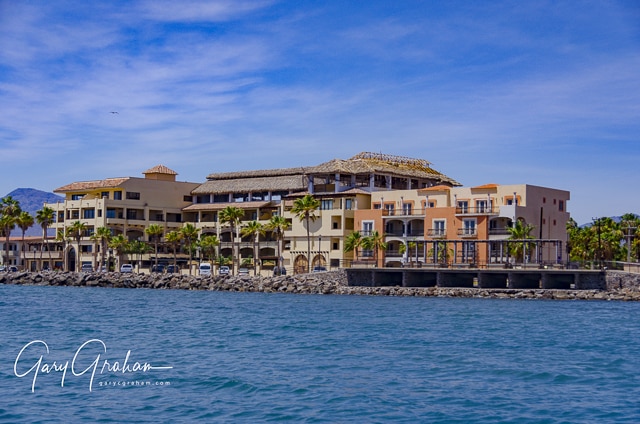 The hotel is without question the perfect place fo 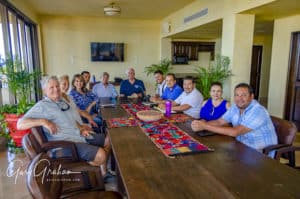 r those who are searching for a glimpse of the birthplace of Baja: it reflects the old mission character of Loreto. Overlooking the malecón, it offers stunning views of the sparkling Sea of Cortez.

Mid-afternoon, the team began preparation for the Saturday morning live broadcast, meeting first with the members of the event committee, business owners and visiting government officials to determine the topics/issues that they would cover during the show on Saturday.

Later, Thursday evening, representatives of SEPEDA and CONAPESCA joined the team for dinner. The hotel Chef outdid himself with an impressive array of local seafood dishes while everyone present discussed the best ways to showcase Loreto.

The town of Loreto has been considered one of Baja’s treasures since its beginnings in1697 when Jesuit explorer Juan Maria Salvatierra founded the Misión de Nuestra Señora de Loreto Conchó or Mission Loreto.

The surrounding towering Giganta Sierra Mountains to the west and the shimmering expanse of the Sea of Cortez to the east provides the perfect backdrops for Loreto’s outdoor activities. Its coastline offers five dramatic islands: Isla Carmen, Isla Coronado, Isla Danzante, Isla Montserrat and Isla Catalina which are all part of the Loreto National Marine Park. This vast 100-mile long stretch of sea that hugs Baja’s peninsula in the Sea of Cortez is a refuge to a diversity of marine life and a home to more than 800 fish species.

It attracts a procession of anglers from around the world who come in search of astonishing inshore and offshore fishing, beginning in June and continuing until September … or often later. The surrounding islands offer exceptional sportfishing for an abundance of yellowtail, sailfish, dorado, marlin, tuna, and roosterfish.
Friday morning, light wind and virtually flat seas greeted the teams as they topped off their bait tanks with live bait and headed north to San Bruno where a handful of boats had gathered, and a few were already fighting fish.

Throughout the morning, a handful of yellowtail were caught, with both Conditt and Taylor each scoring one. Franke and Gray failed to match them, which provided Art and Celia with bragging rights all weekend, plus they enjoyed a free dinner based on a wager from the evening before. They returned to the hotel for a buffet lunch together before heading off in separate directions.

Some of the team members traveled into the foothills for a guided tour of Mission San Javier with VIVE Loreto, Rafael Villegas and Maria. The Mission San Javier is one of the oldest and best-preserved of all the Jesuit missions in Mexico and the U.S., only 32 km outside of Loreto BCS on a scenic road through the foothills. Others attended various meetings to conclude the agenda for the two-hour Saturday morning radio show.

After wrapping up another busy day, the group strolled along the cobblestone streets for 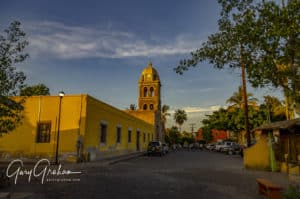 dinner at the “Mi Loreto,” a family restaurant celebrated for its authentic traditional Mexican homemade dishes, near Misión de Nuestra Señora de Loreto Conchó. Everyone was delighted with their meal at this restaurant that had recommended by many locals.

As part of the festival activities, SETUES, along with the Secretary of Fisheries, Aquaculture and Agricultural Development (SEPADA), Andrés Córdova Urrutia, led the III Annual Grand Yellowtail Tournament of Gastronomic Sport Fishing organized by CANIRAC.

The Loreto Marina was buzzing as trucks with boat trailers streamed to the launch ramp long before the appointed start time. Spectators and family members were lined up on the rock quay wall to watch the start as the teams milled about just beyond the jetty, and tournament officials and government dignitaries joined in for the flare send-off.

As the countdown to the start time took place, boats competed for positions. When the clock struck 6:30 a.m., a single flare streaked across the dawning sky and 22 boat engines roared to life, much to the delight of everyone who stood mesmerized at the sight. And the teams raced toward their favorite spot in search of the largest yellowtail.

“Let’s Talk Hookup” was broadcast from the 4th floor of the La Misión Hotel overlooking the Sea of Cortez and throughout the two-hour show, a steady stream of government officials, hotel representatives, sportfishing, diving and other companies involved in tourism, all took turns at the microphones lined up on the long table. Gray and his guests responded to the barrage of callers’ questions about Loreto BCS and what it had to offer its visitors during their stay.

In closing, Franke and Gray thanked Córdova for his leadership, partnership development and strategic planning efforts with SAC. Together, these visits have offered a platform for sportfishing and tourism to showcase their communities both in Baja Sur and beyond to the international communities.

From noon until 3 p.m., boats lined up to weigh their catches. Many teams had multiple fish and agonized over which was the largest. There were more than 30 yellowtail caught, but only 16 were weighed in as the teams’ largest fish were the only ones that counted. By the end of the day, the largest fish of the tournament was a 28.2-pound mossback belonging to Team Harker, consisting of Dennis T. Harker, Anthony Angel Lopez and Jose Manuel Jaciento. 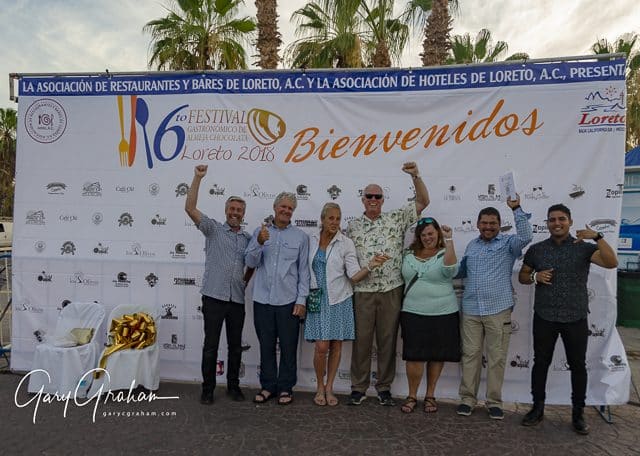 The cornerstone of the weekend activities was the 6th Annual Gastronomic Festival of the Almeja Chocolata which also included the award ceremony for the fishing tournament. The Gastronomic Festival attracted hundreds of both tourists and locals who gathered to taste the traditional Loreto cuisine. 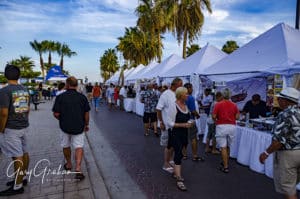 As the evening festivities began, a mariachi troupe set the mood to the delight of the arriving crowd. Each attendee received an ID bracelet along with tickets for seven entrees plus their choice of any of the desserts for $20. As the music played, the crowd meandered along the long row of stalls offering the “Best of the Best” local dishes Loreto’s chefs had prepared.

“The cuisine of Baja California Sur is recognized worldwide for the authenticity and taste of its dishes, making it an important tourist attraction,” Secretary of Tourism, Economy, and Sustainability (SETUES), Luis Humberto Araiza López declared.

The secretary underscored that this traditional festival, proclaimed internationally the 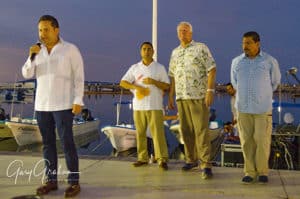 extensive and splendid selection of Loreto cuisine, which, in addition to the region’s natural beauty and historical richness, lures hundreds of people from different countries each year to sample and enjoy the myriad of dishes prepared with local clams, fish, and seafood. Thanks to the Association of Restaurants, Bars and Hotels of Loreto AC, as well as the National Chamber of the Restaurant and Seasoned Food Industry (CANIRAC) for their efforts on behalf of the event.

Following dinner, the cash awards were distributed to the winning teams with the three largest yellowtail, along with invitations to compete in the Final SEPESCA 2018 scheduled for August 10-11 at Loreto BCS. 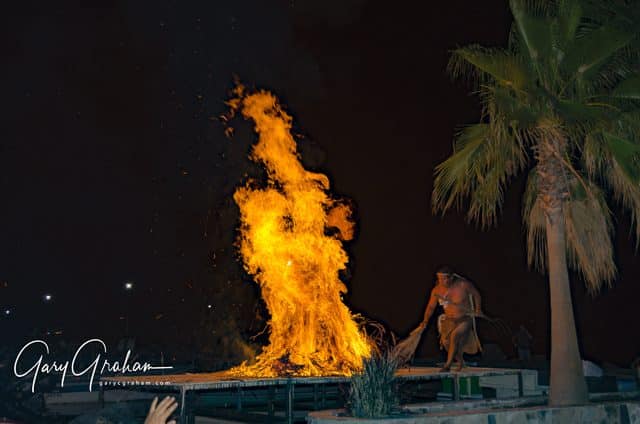 Tatemadas demonstrated the traditional way locals prepared clams hundreds of years ago. First, they were covered with sand; then piled high with dry brush that was set afire and burned for about 40 minutes, perfectly steaming the clams.

Loreto BCS was the first town I visited with my nine-year-old son decades ago when the roads were too rough to travel. Having returned for the umpteenth time, I was encouraged to hear the enthusiasm from the community leaders about their many plans and efforts. I was able to see the results for myself.

If beauty and serenity and a step back in time are on your agenda for a vacation, this is one treasure of Baja you should see for yourself. Loreto BCS never disappoints its visitors.

To listen to the show from that weekend:

Get more of Gary’s Baja Bytes on BD.