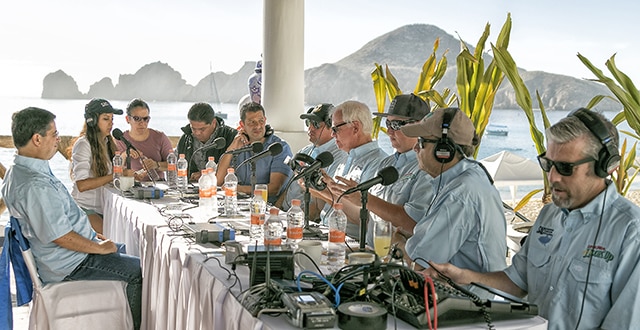 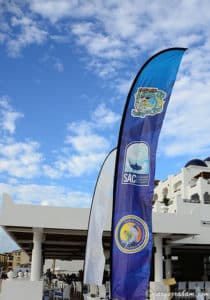 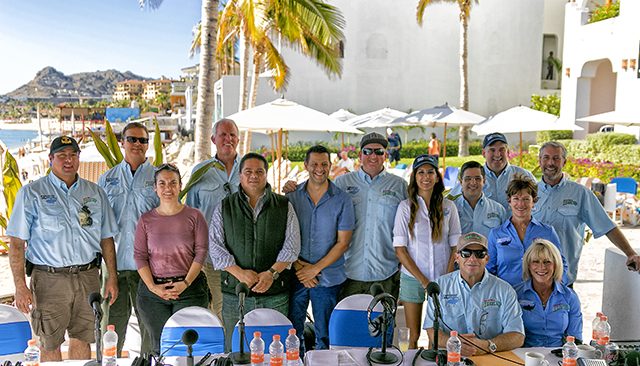 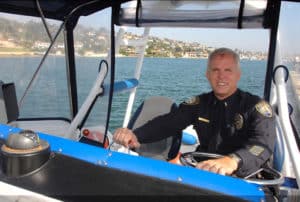 Franke’s background includes 35 years as a sportfishing charter boat captain and conducting marine research activities combined with a 28-year career with the San Diego Harbor Police. While there, he was a lieutenant for 21 years, serving as an incident commander for the many major events which drew thousands of people and boats to the San Diego Bay waterfront. 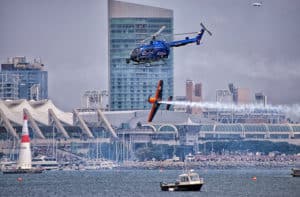 he Red Bull Air Races with tens of thousands of spectators lining the waterfront to watch planes flying low over the bay, to
Super Bowl waterfront festivals attended by 250,000 football fans, as well as America’s Cup yacht races during the 1990s.
“Coordinating water and shore-side security for these events was a team effort,” said Franke. Harbor Police lieutenants and sergeants regularly work with the U.S. Coast Guard, and at times, the U.S. Navy.

September 11, 2001 was a day in Franke’s career that will forever be etched in his memory.

He and his men had to take immediate action and implement extraordinary security measures for the safety of San Diego and the entire harbor.

All of which provided him with a wealth of knowledge and experience which he now shares with SAC and the government and community leaders in Cabo San Lucas. His knowledge and direction is amplified by Zamarripa’s professionalism and youthful enthusiasm. 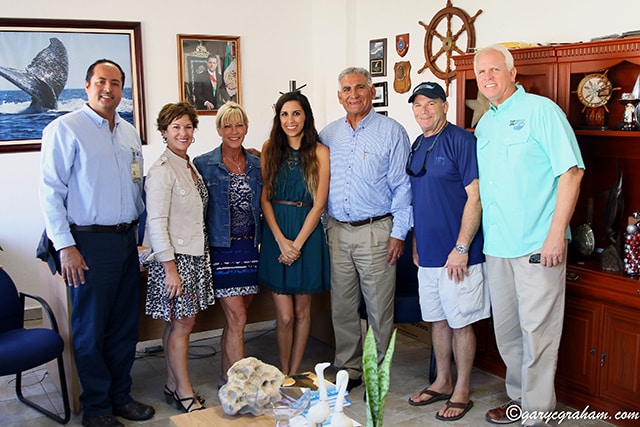 The team met with Hèctor Montaǹo, Gerente and Port Security Officer Fernando Hoyos at their API office at the marina on the first morning.

Montaǹo explained that Cabo San Lucas is one of 32 merchant seaports in Mexico and has the highest security effectiveness rating.

During previous trade missions it had been recommended that the Mexican Pacific Ports unite and approach the cruise companies as a route, addressing security and amenities in the dialogue. Hoyos stated that this had been done with the results that the cruise business has increased from 100 cruise ship visits to more than 200 this year and climbing.

Because the Port of Cabo San Lucas has two primary origin ports for cruise ship activity, San Diego and Los Angeles, Franke suggested that San Diego Port members be permitted to be involved in future meetings. He emphasized an interest in promoting the route with San Diego as the origin. 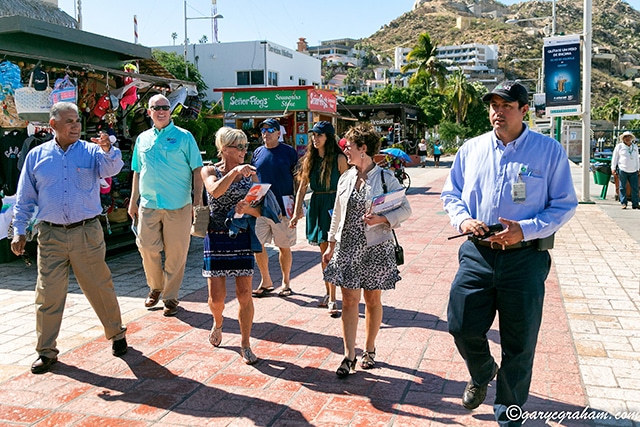 Montaǹo added that the yachting and commercial vessel activity from the Port of San Diego has significant impact on their port. The primary season begins November 1 with the arrival of the Baja Ha-Ha sail and powerboats as well as the large yachts from the San Diego marinas. This has important recurrent impact on the local port’s economy throughout the winter months.

The team also reviewed their security measures from a maritime perspective as well as the licensing and safety training of the mariners who operate the 800 charter vessels in Cabo San Lucas. Documentation and crews were up-to-date and in compliance with the IMO regulations.

Hoyos confided that random inspections are conducted on all vessels heading in and out of the port to ensure safety measures are obeyed. 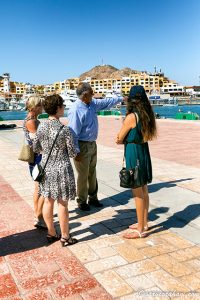 on 24-hour standby at the Cape with coordination from Ensenada. Aircraft, helicopters and patrol vessels between both of these ports cover vessels transiting the Pacific coast. SAC commented that they are actually trained by the U.S. Coast Guard.

The group later attended a lunch at Fisherman’s Restaurant overlooking the IGY Marina with local business representatives hosted by Jorge Tellez of Solmar Hotels & Resorts, along with Enrique Fernández of Puerto Los Cabo Marina. The restaurant lived up to its reputation of some of the finest sashimi served in the Marina.

Ending up the day with an IGY Marina and outer bay tour aboard the Don Luis, courtesy of Jorge Tellez’s Gaviota/SolMar Fleets, the attendees 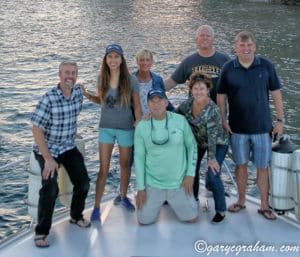 enjoyed a spectacular golden Baja sunset viewed from outside Land’s End on the Pacific side.

At the hotel that evening, the team huddled one last time to debrief and discuss how the information would fit in the Saturday radio show the following morning. Zamarripa, in the midst of her schedule coordinating the visiting team’s activities, had managed to track down CONANP Baja C South Representative Maria Josue Navarro, representing CONANP National Commissioner Alejandro Del Mazo, who agreed to attend the show and provide factual details regarding the decree establishing a new 2.7 million-acre Baja Pacific Islands Reserve that had been announced earlier in the week.

The announcement of Mexican President Peña Nieto signing the decree for the Pacific biosphere reserve had resulted in a flood of inquiries to SAC and members of the team regarding the impact on recreational anglers who feared the worst. CONANP’s Navarro joining the radio show was exciting news for Gray and the rest of the panel me 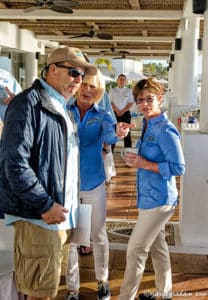 Early the next morning, Gray sporting a jacket, noted, “This is the first time I have ever worn a jacket in Cabo.” His sound engineer, Cutler, unpacked the huge Pelican cases filled with sound equipment for the show on the Pueblo Bonito Blanco terrace overlooking the beach and Pacific beyond, agreed. 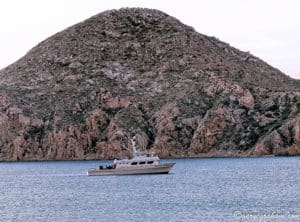 Out in the bay, in the shadow of Baja’s tip, San Diego-based long-range vessel “Royal Star” rocked gently. Having completed their annual Let’s Talk Hook-up 12-day trip off Baja’s coast, Captain Tim Ekstrom commented they had experienced remarkable wahoo action with some fish as large as 75-pounds.

As broadcast time neared, team members and guests gathered. Ekstrom along with Rock Cod Rick Maxa, Gray’s co-host who had been aboard the Royal Star, along with other crew member and passengers, trudged up Medano Beach to the hotel. 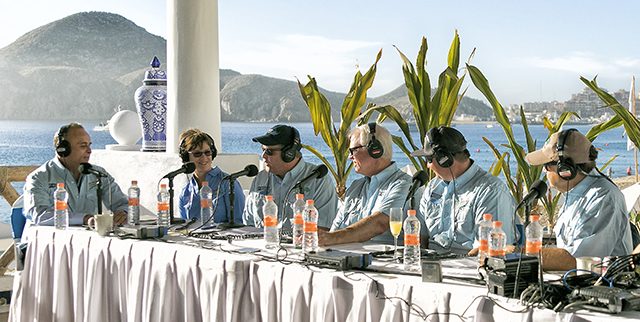 Franke volunteered that “… Sportfishing Association of California is broadening SAC’s membership base to Mexican ports – Ensenada. Los Cabos and Mazatlán – in order to promote more opportunities for cruise ships and sportfishing, there are some phenomenal things going on here that is of interest to our members.” Team member joined local business and local government representatives sharing insights and observations resulting from the many meetings held over the past few days.

Heule shared some of her first-timer visitor observations: “I have traveled 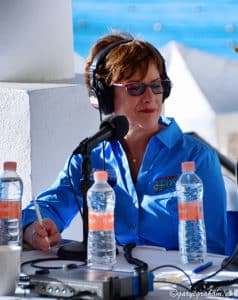 to Tibet, Dubai and throughout Europe many times, but never Los Cabos which I find stunning, breathtaking and different than I expected because I have heard so many people compare it to Cancun. When I arrived, I found it hip, sexy, but very cozy at the same time; I’m really feeling at home here … less than a two-hour flight to find a combination of adventure and excitement, while feeling at home. It’s something that you can’t find everywhere.

I learned yesterday that Cabo San Lucas is still on the rise and when the current construction is finished there will be another 6,000 rooms that will create jobs for an additional 18,000,” she concluded. 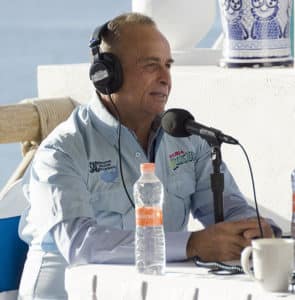 Tellez, local sportfishing fleet and restaurant entrepreneur, added that “Cabo’s foundation is and always has been sportfishing.

Attracting leaders of governments and businesses, movie stars, presidents, kings and tourists, along with anglers from the four corners of the world who enjoy the year-round fishing.”

He continued, “The fishing still attracts 40% of the visitors; three major events have grown out of the Cabo sportfishing. They are the annual Bisbee Black and Blue Tournament with its $3.5-million dollars in prizes, along with the largest WON yellowfin tuna tournament with its 168 teams this year, and the Stars & Stripes Tournament, the largest charity tournament of its kind, combining sportfishing, golf and other outdoor activities. Stars & Stripes raised $3.1 million for charity.

The world class signature golf courses along with many other outdoor activities – from sunset cruises to off-road adventures – have made the area one of the most popular family destinations in the world.”

Next up was Malcolm. “It’s like coming home for me and I welcome the opportunity to promote Los Cabos and tourism throughout Baja and Mexico. Our message is get on a cruise ship, a boat or fly down and see for yourself.

“The importance of the cruise ship business cannot be overstated. Each cruise departing to the Mexican Rivera adds approximately $2,000,000 to the local economy in San Diego as well as benefiting the other ports economically.

“This past year [2016] we had 105 cruise ships depart, as well as the Baja Ha-Ha cruise hosting 200 sail and power boats that cruised down the West Coast of Baja and Mexico.” 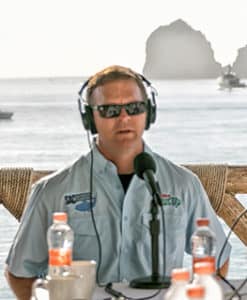 Panel member Ekstrom declared. “Cabo is such a grand place to unload passengers so they can avoid the long [boat] ride uphill, as well as unwind a day or two after a trip. We appreciate the generosity of Mexico allowing us to enjoy their resources; this is one way to contribute to the community.

“Los Cabos offers endless opportunities to anglers seeking a mini-vacation getaway who can’t take much time off. There is no better fishing structure for big tuna close to port,” he concluded.

Cloward observed the large Municipal Pier built to accommodate tourists visiting aboard the cruise ships. “There are enough berths to allow 2,000 tourists to unload for a visit to 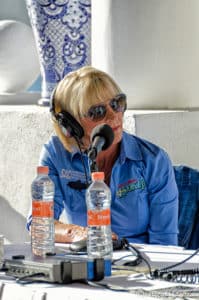 town per hour,” she marveled.

There is also a new Tourist Center under construction that will provide visitors with information about activities and services available in Cabo San Lucas.

The first hour of the radio show concluded with Cabo visitors Paige Kimrey and David Morris dropping by to tell about their awesome day of fishing with the local Pisces Sportfishing Fleet, arranged by Cass Tours. They proudly proclaimed they had caught and released three striped marlin the day before.

• Los Cabos currently has a 30% growth in number of rooms.
• Approximately every two years a signature golf course is added.
• Officials are currently working on an “Open Skies” agreement allowing United States citizens to clear US customs at the airport before departing and hope to have it in place sometime in 2017.
• Cabo San Lucas was the first marina to receive certification from federal government.
• The key marine repair yard in Cabo is the Marine Group Boat Yard which is managed by the San Diego Bay headquarters in Chula Vista. 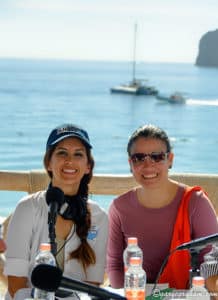 A first draft is projected to be available in 8 months at which time interested parties will have the opportunity to review, comment and submit recommendations. The plan will address bag limits, fishing methods, designated seasons and areas for fishing. There will be three new CONANP offices established in Ensenada, Guerrero Negro and La Paz to monitor the program. She closed by stressing the importance of not jumping to any conclusions until all the details were determined. Meanwhile, there is no impact on the areas included until all of the details can be decided.

San Diego Councilman Scott Sherman, on behalf of Mayor Kevin L. Faulconer, called to congratulate the team and all agencies represented for their efforts on behalf of the Port of San Diego and Mexican Tourism.

In closing, Franke thanked all of the participants for attending as well as assuring listeners that SAC’s program of reaching out to selected ports in Baja and Mexico would continue next year. He added that the SAC staff would be monitoring the progress of CONANP’s staff continuing progress on the Pacific Biosphere management plan in early 2017.