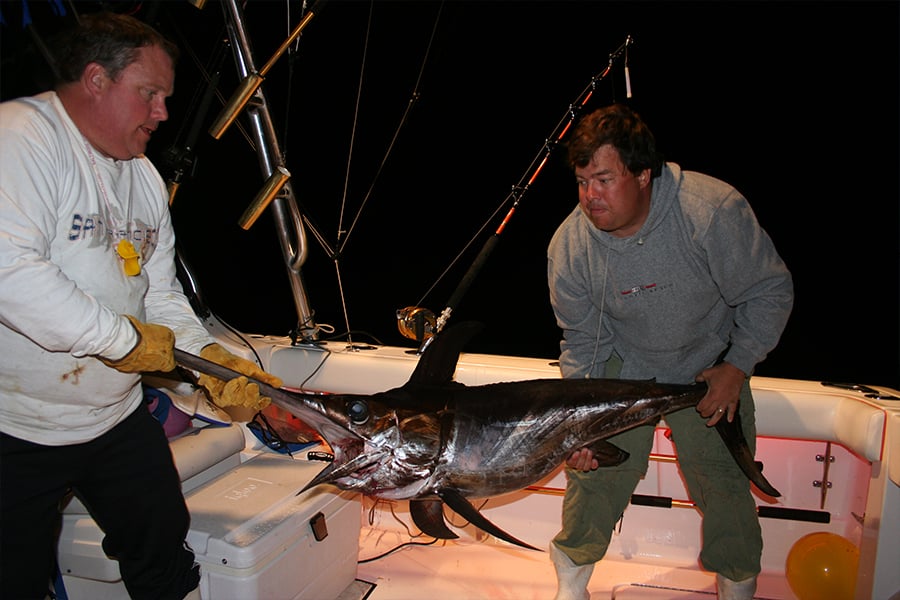 Running at night certainly raises the danger-factor to be out on the ocean, but these tips and tactics will help make that cruise through the darkness a safe one.

Sometimes the bluefin go on a night bite, you want to try an overnight fishing trip, or maybe the Student of Slay mantra “Never Give Up” running through your head tempted you to keep fishing until the sun fell past the horizon. Whatever the reason may be, if you’re a die-hard angler who makes long runs and fishes hard, there’s a good chance that sooner or later you’ll find yourself running your boat at night. And when that time comes you’d best be prepared.

Gear For Cruising At Night

Everyone should keep a flashlight or headlamp on their boat, but make sure it has a red or blue light setting if your boat doesn’t have courtesy or map lights that won’t blind you and ruin your natural night-vision. Another good item to keep handy is a box of glow sticks. Whenever you’re out past daylight, hand a glow stick and a rubber band to every crewmember and ask them to attach the stick to a belt loop. Then if anyone ends up in the drink, they have a visual signal that can be seen easily in the dark.

The king of all night gear is, of course, night-vision. Big boats may have FLIR cameras piped into the MFD but anyone on just about any budget can get a handheld night vision scope like the FLIR First Mate.

But today there are plenty of options, even below the $1,000 mark, not only from FLIR but also from IRIS and SiOnyx.

What about a spotlight? They’re great to have when you’re trying to spot a specific object in the water, but cruising with one illuminated is a mistake. The glare will ruin your own night-vision abilities. And if you flash another boat, you’ll likely blind the captain for a moment or two.

Something every mariner should be aware of is the autokinetic effect, also known as “induced movement”. This is a phenomenon that can affect anyone out on the water at night, and it’s the illusion of movement when looking at a stationary light in the darkness.

When you stare at a fixed point of light, the tension in the muscles that control eye movement cause your brain to think the light is moving. (it’s the same experience you have when staring at a star, believe it to be moving, then realize it isn’t). What’s worse is that the autokinetic effect has a different impact on different people – you might think that light is moving from east to west, while someone standing right next to you might think it’s moving from west to east.

Obviously, this false interpretation of movement can be quite dangerous when you’re running a moving boat. Fortunately, there’s a simple solution: instead of looking directly at the light, look away from it slightly and watch the light through your peripheral vision. This allows the eye muscles to relax, and you’ll see if it’s stationary or moving out of the corner of your eye.

Best Practices for Cruising at Night

Even if you’re experienced and fully prepared for cruising through the darkness, there’s one simple practice everyone needs to keep in mind: slow down. Today’s boats go way too fast to maintain a “normal” cruising speed through the darkness, and you should never go any faster than a speed at which you can avoid something you spot ahead of your boat.

Another key thing to remember is that cruising at night there’s a good chance the captain and crew will be tired, if not running on fumes. Pay attention, stay fresh, and stay alert. Now’s the time to be chugging coffee, not chilled carbonated beverages.

Finally, call on the entire crew for help. A second pair of eyes watching forward is a huge help, and a third pair of eyes scanning off to the sides and behind the boat will help prevent any nasty surprises.

Is cruising at night more dangerous than running in broad daylight? Obviously. Yet we’re still bound to do it, whether a long run means pushing off in the pre-dawn hours or an unforeseen event keeps you out later than expected. Be prepared.