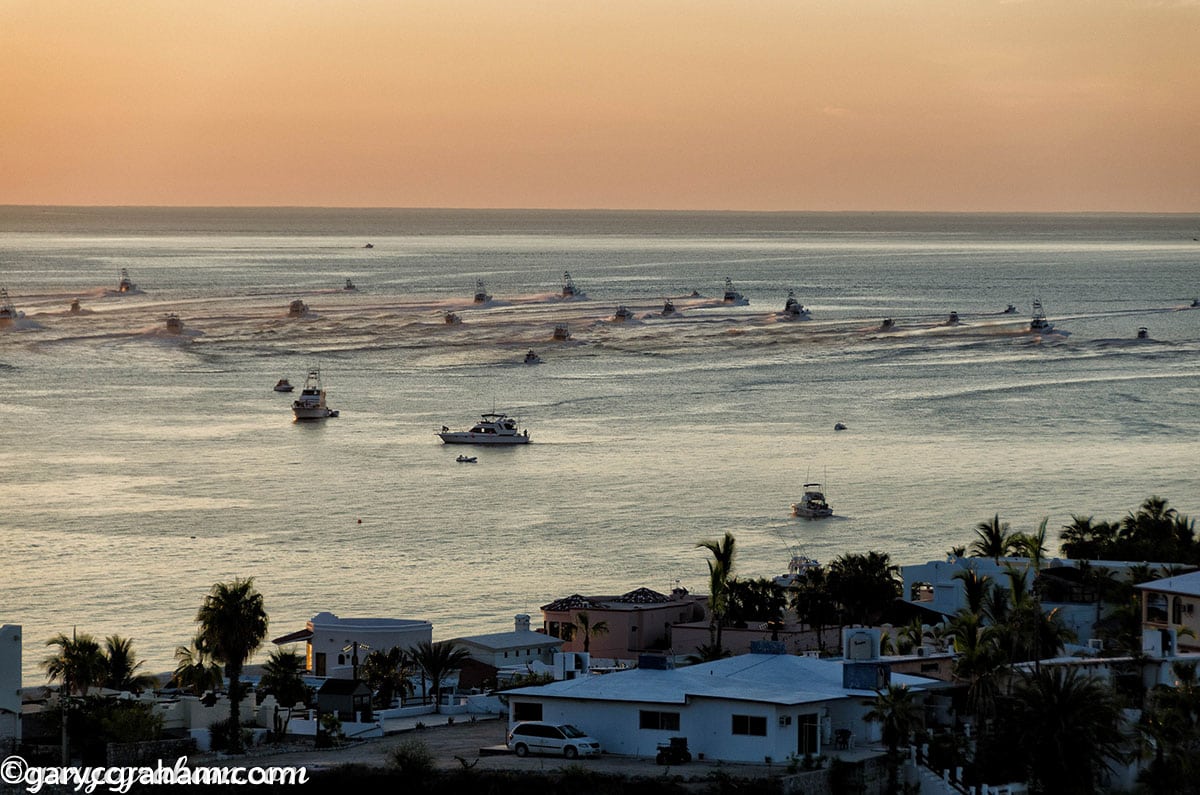 Teams slowly trickled in most of the afternoon to register for the Bisbee East Cape Offshore Tournament. Some looked perplexed as they gazed out in front of the host Hotel Buena Vista Beach Resort beach and beyond — Where were all the boats? How many were signed up? What was the number of teams last year? — Clearly their faces were reflecting anxiety about the attendance this year as they nervously shifted in line.

As more and more anglers arrived, concerns about participation seem to fade and the perplexed looks and nervous faces changed to smiles and laughter and a thrust-and-parry mode as the teams banter began with greetings in both Spanish and English: “Que onda,” “What’s happening?” Or “Hey brother” or “Ola,” before the conversations drifted toward more serious matters about the challenge at hand …”FISHING!”

Where the billfish were didn’t seem to be an issue at this point. Local and visiting teams thought they had figured that part out. The main topic was where to find the big bait. Skipjack, football-sized tuna so common a few weeks ago, were gone! Throughout the afternoon, venders vended, money changed hands, latest and greatest lures (some from beneath the counter) were passed across the counter to eager anglers. Tequila was poured, cerveza swigged and enough guacamole and chips were consumed to deplete the Resort’s supply.

Mid-afternoon, Ed La Joy walked over to me and introduced himself. “I just wanted you to know that I read your book about Baja fifteen years ago and I have been coming to East Cape ever since! I’m guessing you have cost me about a million dollars, which included my three boats, one of which was my 45-foot Viking “Shock & Awe,” plus the home I have next to Playa del Sol,” he concluded. I didn’t get the feeling that he was complaining. Lines lengthened and teams crowded the busy registration tables. Greetings mixed with a little bit of “smack,” plus lots of laughter filled the area as teams waited patiently. Picking up their swag, they were then herded to a black backdrop for the obligatory “Team” photos, all hoping that this wouldn’t be the last time they saw the photographer during the next three days of fishing.

Finally, the sweltering heat was tempered slightly by a breeze blowing softly off the sea. Clicerio Mercado and Wayne Bisbee stepped up on the lip of the Resort’s huge Jacuzzi.

After welcomes and announcements, Bisbee explained that there would be first, second and third cash prizes for the “Release Categories,” a new innovation for the ECO tournament. More than 50% of the teams participated! He continued that he wanted “more rods bending this year,” and he added that in order to conform to the other Bisbee Tournaments, one member of each winning team would be required to complete a polygraph examination!

By the end of the evening, the 65th and final team,“Macario,” turned in their entry, making four more entries than 2015 and driving the total cash prizes for the different categories to a whopping unofficial total of $540,850 — a nice increase from the jackpots last year. At precisely 7:00 a.m., under cloudless Baja skies, the fleet of 65 boats with 429 anglers sped off, as the bright red flare fired by Cabo San Lucas Mayor Arturo de la Rosa sailed across the horizon.

Remarkably, the first fish was released before 8:00 a.m., a standard that was met on all three days of competition.  Then about 10:30 a.m., the first qualifying blue was brought to the scale by “Bull Rider” caught by Trenton Twamley. “Took about an hour to land,” Rick Twamley commented. “I had tendonitis and let my son Trenton finish the job. I first spotted the fish on the sonar and then on my depth finder and realized I had passed him. I made a circle and he ate a 5.5 green and yellow Zucker. Must’ve been hungry,” he concluded as he dashed back to their boat to head back out.

No other qualifiers (billfish weighing 300+ pounds, 40-pound yellowfin tuna or 30-pound dorado); however, the tally for the day was respectable: 31 blue marlin, 6 sailfish, 12 striped marlin and 1 yellowfin tuna for a total of 48 billfish released.

That evening, Renegade Mike, from Cabo, fishing on the “Real Gold” as a mate observed, “There are a lot of fish — the trick is finding that qualifier!” Thursday morning was one of those color-rich mornings. The bulk of the fleet headed south in search of a qualifier that could best the “Bullrider’s” 427-pounder. The VHF radio at Tournament Control remained eerily quiet until nearly 9:00 a.m. when “Gotcha” released the first blue marlin of the day — the first of a steady deluge of releases. Then at midday Captain Gonzalo Castillo, aboard the “Pangalisa,” a 32-foot Edgewater, center console, notified the Weigh-Station they had boated not one, but two yellowfin tuna and were on their way to the scale.

The Bisbees,Wayne and Trisha, and the remainder of the staff were ready and waiting when the excited team arrived. Since there hadn’t been any qualifiers on the first day, anything over the 40-pound minimum could take the first two day dailies. As the two tuna were muscled up to the scale, it became clear one was significantly larger than the other. Mike Hennessey and John Dominac quickly decided to weigh the latter tuna which topped the scale at 111-pounds, placing them at the top of the game fish category!

After the weigh-in Dominac commented, “It was a lot of fun! We were committed to catching tuna today; we did come chunking and got doubled up. Although a little farther out than expected, we saw a bunch of life and started trolling for about five minutes. Then the guys said, ‘Let’s get some bait in the water.’ We did and we doubled up!” He added, “Mike Hennessey and I fish all over the world and it was a real treat to fish with two local boys out of La Playita. These guys are ‘Rock Stars’– fishing 100% La Playiano style. They run a panga charter business out of Puerto Las Cabos at La Playita.”

In the meantime, the number of released blues continued to climb. The team rushed through the photos, declaring that they wanted to get back out to catch their own blue. They ran down to the pier and leaped into the water to cool off before casting the lines off and heading back out to the grounds.

By lines out, the score for the fleet on the second day was an astonishing black marlin 1, blue marlin 49, sailfish 4, striped marlin 10, yellowfin tuna 2 — for a total of 63 billfish released.

Going into the third day, 63 teams were still hoping for that qualifier! Captain Mark Rayor, speaking for them all, agreed, “There are a lot of fish — more than I’ve seen in many years, but finding a qualifier is tough.”

Before 9:00 a.m. lightning struck for the team VIVA BOYZ and for angler Michael Loynes aboard Capt. Vicente Cosio’s “Dottie B l.l” When they arrived at the scale, a debate ensued among the spectators.

“It’s not going to make 300-pounds,” several claimed knowingly. The entire team trudged up the sand behind their catch with a collective look of determination. Scale zeroed, Michael Loynes confirmed the scale, fish was easily hoisted up to weigh, and the needle begins to rise: 250 … 299… Trisha, the Weigh Master squinted at the scale as the needle finally stopped and she declared, “316 pounds!” as the crowd of spectators cheered and team members hugged one another.

The obligatory photos were taken. The angler was sent to the pool while the rest of the team climbed back on the boat, heading for the grounds to try to add to their score.

It was not to be. When “lines out” arrived at 4:00 p.m., Bullrider and Dottie B ll had the only scoring fish for the contest. The awards dinner and ceremony Saturday night was scheduled to be held on the beach in front of Hotel Buena Vista Beach Resort, but a tropical storm brewing farther south drove the temperatures up into 90s, delaying the start of the festivities until well after sundown. It was the only thing hotter than the blue marlin fishing had been for the past three fishing days. “CaboMax” provided their special brand of music mixed with some oldies that had many involuntarily humming or outright singing along during the authentic Mexican buffet that was so good many were going back for seconds.

Then Wayne, Trisha and Clicerio took the stage. Wayne began by recognizing local dignitaries and other guests of honor before inviting ALMA, the local “Pet Rescue” organization, to conduct their annual 50/50 charity raffle — splitting the proceeds of the raffle ticket sales held during the event.

He began the awards portion of the evening, referring back to his comments at registration. “You took me at my word – you guys were indeed bending rods; we were looking at the videos and you more than met my expectations. There were a lot of small blues and you managed to find them. You guys rock.”

And he added, “By the way do you think we could have picked a better year to start the release division? Good Lord!”

Then came Michael Loynes with the only other qualifying marlin (300-pound minimum) at 316-pounds. With the Second Place Tournament Award and Rollover Jackpot money, Capt. Vicente Cosio and Team Viva Boyz earned $58,523 for the catch aboard the 32-foot Albemarle, Dottie B II, based at the host facility, the Hotel Buena Vista Beach Resort.

Next the overall winner Bullrider, Rick Twamley, with the largest blue marlin 427-pounds earned their team $340,701.88.

“This was definitely a good warm-up for the fall competition,” Tournament Director Wayne Bisbee concluded. “The turnout and prize money was up from last year!”

The first week of August, 2016 will always be remembered as the “Rod Benders Ball” by the 429 anglers who released 112 blue marlin, 36 striped marlin, 14 sailfish and 1 black while competing in the Bisbee East Cape Offshore. It is certainly one for the record books with a shot at the most billfish ever released in a three-day period.