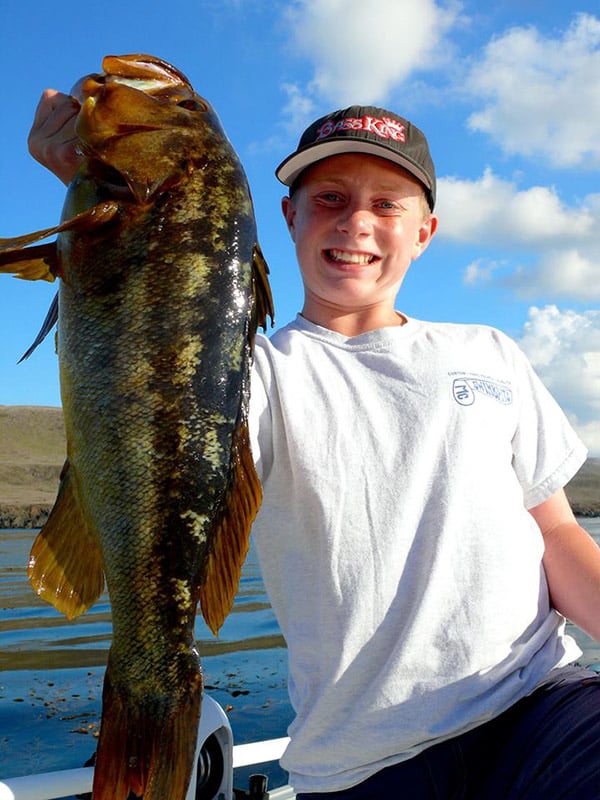 Last weekend’s weather ended up being a lot better than forecast and the calm conditions resulted in some great rockfish counts up and down the coast. Starting way up north, Scott Summersgill and Nick Tharp launched out of Santa Barbara Harbor and made a long run up the line. Fishing Big Hammer Sledgehammer swimbaits in 150 feet of water. They caught and released over twenty lingcod before keeping their limit of fish in the ten to fifteen pound class. After they were done with the lings, they found some breaking schools of bonito that were moving fast, but they managed to get on them one time and Scott landed a sixteen-pound fish on a Krocodile. Private and sport boats fishing the Channel Islands have been loading up on the big rockfish. The Aloha Spirit and other sport boats have been making the run to Santa Rosa and have been catching lots of nice reds and lings. Closer to home, Captain Larry Heron of Calico Hunter Charters fished the west end of Santa Cruz Island on Saturday. His group caught limits of good-sized rockfish and lings on swimbaits in sixty feet of water. Due to the shallow depth, they were able to release the smaller fish safely and save room in their limits for bigger fish. The Santa Monica Bay is still kicking out steady rockfish counts, but there haven’t been as many reds in the mix as there were in previous weeks.

So if you want a shot at reds, you’re better off heading out of LA Harbor or Long Beach.

The sport boats have been catching good numbers of reds on live squid out at the 150 and have been filling out limits with assorted smaller rockfish and a handful of lingcod. Private boaters looking to catch some reds should meter around the hard bottom at the 150 looking for marks and make sure to have some live squid. Remember, the reds mark more like bass and not as a huge cloud. Getting away from rockfish for a moment, the calico bass bite at San Clemente Island remains excellent for private boaters. The island has been getting a lot of coverage from teams pre-fishing for the SWBA California Offshore Challenge and it’s been kicking out lots of good fish. The highlight of the weekend was the 6 lb 10 oz calico bass caught by TJ Ponder while fishing with his dad Ty on their 22-foot Ranger Bahia. TJ currently holds the Small Fry Division calico bass world record and if this fish is approved will also hold the Junior Division record. The fish ate a 7″ MC Weedless swimbait and the entire thing, from bite to net, was captured on GoPro so he should have no trouble getting the record. Further down the coast, the rockfish continue to bite in their normal zones off Dana Point and Oceanside. The rockfishing in San Diego is pretty good as well. Matt Kotch fished down there on Tuesday with Eric and Logan Noguchi and they had limits with lots of nice reds in the mix. The reds were caught on squid, sardines and Ahi Assault Jigs. Matt said that there was a ton of bait in the area outside of La Jolla and that they saw several hundred pound class thresher sharks while fishing rockfish. San Diego’s overnight fleet has also started to run rockfish trips into Mexican waters. These trips will continue to run once the California season ends on December 31st.