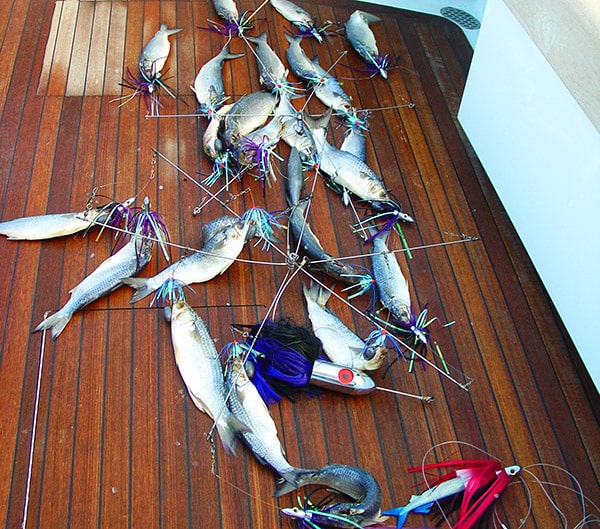 Trolling for offshore fish like marlin, sailfish, tuna and dorado can be as simple or complicated as you choose to make it. Much of your approach is affected by your boat, crew, location and of course budget.

Striking the balance between presenting the most robust spread and physically managing it is the key. Teasers can be an integral part of any trolling spread, and the variety of teasers is endless. Whether you pull a simple squid chain or a triple layered, split tail mullet dredge; you have two elements in common. Barring pulling teasers on a hand-line, you are probably using a reel threaded through an outrigger. The worst case scenario for this common set up is for a big fish to get wrapped up in the teaser, or more commonly, the teaser to get wound up in a prop or shaft. Either way it happens fast, and by preparing for that moment, however unlikely, can save your outrigger from being ripped off of your boat. Simply put, I build in a weak link at the end of the heavy teaser line.

We normally use 300 to 400-pound mono leader as a teaser line and it takes more than an outrigger to break it. So when setting up your teaser reel, tie a sacrificial piece of 100-pound mono to the spool and then use an Albright knot to tie it to the heavy mono line. Now in that rare situation that your teaser gets wrapped up in something unstoppable, the 100-pound should break at the end of the run instead of the outrigger getting torqued and potentially ripped down.

I have seen some people use electrical tape to just tape the end of the heavy line to the spool and this works, but I prefer to have a chance to save teaser in the situation that the reel gets hit into freespool and before you realize, it all goes away. Teasers can be quite expensive themselves, but we would all sacrifice the teaser instead of a destroyed outrigger.

Yes I know it doesn’t occur often. I have never had it happen, but I have certainly seen more than one rigger hit the water because of it.

It only takes a second to build in a weak link and it may save the day!

Check out how to tie the Albright. It this case, treat the 400 mono as if it were the wire, and just trim the tag short instead of the twisting.