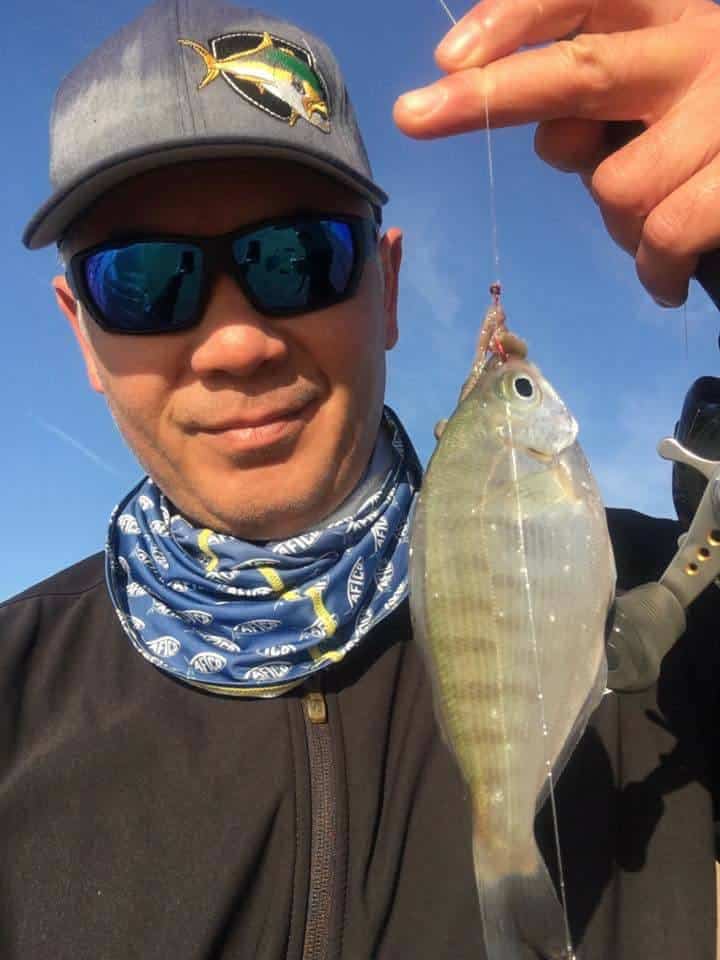 You know how facebook pops up your “memories” from previous posts on that particular day last year(s) ago?  I got one this week showing me with my friend Mike Abenoja.  It was 3 years ago.  We fished Dockweiler and it was wide open on surf perch.  I looked at that pic and thought to myself…

That was the last time I caught a surf perch

Other than a couple weeks this summer when the corbina bite was epic, surf fishing has been pretty dismal for the last 3 years or so.  The decline of surf fishing has paralleled the onset of El Nino.  While we enjoyed epic offshore fishing, the surf perch pulled a disappearing act.

At that point, I was pretty stoked about my fairly newfound ability to catch surf perch with some proficiency.  It was like my rockfishing from the beach.  I was starting to learn how to catch other species.  I’d try different things when I went out, but surf perch were my skunk killer.  It was reassuring.  I could take my kids and/or guests to the beach and have confidence they would catch.  Then POOF…they just kind of disappeared.

I was encouraged last week with some different reports I heard through the grapevine.  My buddy Ron Owens of SoCal Sportfishing Club put on a little get together this weekend at Bolsa Chica State Park.  Ron said he’d have some different baits on hand.  The venue and bait matched up with the dope I had heard over the week, so I decided to go check it out.

I got there at 6:30 and it was just me and Ron.  It was COLD.  I stepped out of the car to put my rig together.  When I was done, I needed to get back inside, blast the heater and have some coffee to warm back up. 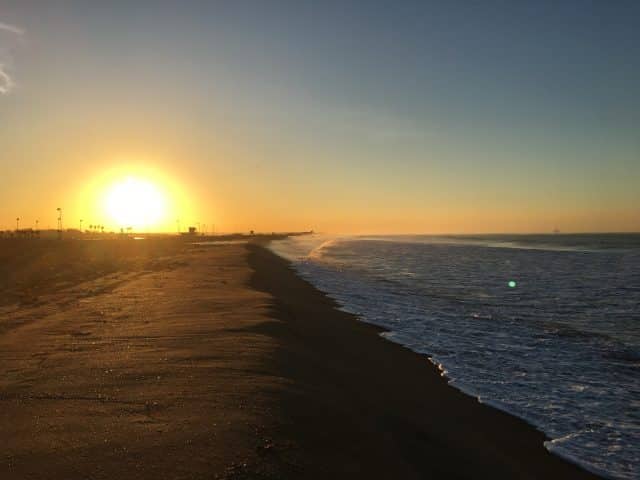 One of the nice things about surf fishing in the winter is the lack of crowds.  When I got to the beach, there was one other angler and some surfers in the water. I tried the normal Carolina Rig setup to start, but we were close to the high tide.  The waves were pretty big given the full moon.  I didn’t have enough weight (3/4 slider).  After I promptly lost my first bait (live lugworm), I decided to switch up rigs and go heavier. 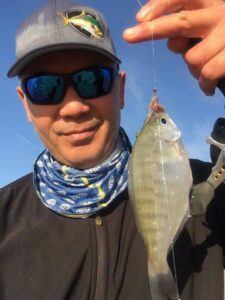 I re-rigged dropshot style and changed my hook to a bait hook with a longer shank and some barbs on the shank to hold the worm better.  I wanted a 1 or 1.5 torpedo, but I didn’t have one.  I had a 2 though and tied it on.  I put a whole worm on the hook with both ends wiggling freely on either side of where I threaded it on and gave it a go.

Money call.  I was able to cast well past the shore break and keep my line out in front of me longer (vs. off to the side where the waves wanted to push it).  I slowly worked it back and found where some fish were holding.  The catching kicked off with a nice yellowfin croaker.  I followed it up a short time later with a walleye perch.

A perch!  How exciting. 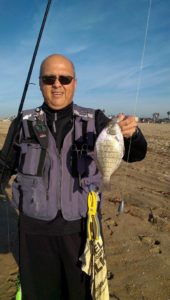 Once we got past high tide, the waves weren’t as crazy.  I should’ve switched back to the C-Rig, but time was getting short before I needed to head back.  My new friend, Vincent Soto Roa (right), was fishing the Carolina with a small green grubtail plastic.

I stayed long enough to watch him connect with a nicer barred surf perch…first one I’d seen live in 3 years!

Good to know they’re back (or still around?).  In addition to seeing Vincent’s nice BSP (and catching a couple fish of my own), I came away with some new learning to guide future outings.  Looking forward to putting it to use through the winter between boat trips.