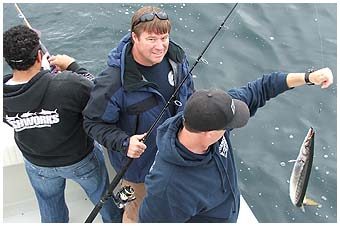 Over the years I’ve been very lucky to witness many beautiful sunrises at sea, and I never tire of the sight nor the promise of another day on the water. The one you see in this photo was especially sweet as we’ve been able to get out so few times so far this season — hopefully that will change soon.

Coming out of the harbor and turning up the coast, we started fishing in 22 fathoms out in front of Manhattan Beach, with the meter on and the sonar searching out the bait concentrations that have been holding big schools of barracuda. It didn’t take long to find the area with the bait and the birds, but no signs of fish early on. I tacked around the spot and made a few stops, scoring one mystery bite. We took off up the beach where the some boats fared a bit better the day before but we got the same result — not much signal.

About an hour into the search and just after devouring some of our famous killer breakfast “boat burritos,” we were nearly back on the numbers where we had first looked.

“Once again the 14-power gyros proved their worth as I could see a big bird school in the far distance and this time there were some fish up under them.”

A few other boats in the zone were running for the pod of birds, including a couple of the sport boats. It cracked me up to hear Jeremy, captain of the Spitfire, declare it “the ugliest bird school he had ever seen,” due to the high ratio of pelicans to terns in the mix. Ugly it was, but nevertheless it was the real deal and was holding heavy.

We slid through the school of birds to the outside edge and our guys got busy on the barracuda. We had all we needed in the bag by midmorning. We kept a few and a handful more were caught and released.

The barracudas were a beautiful grade of 6- to 10-pound fish and as a tackle shop owner, I’m thrilled to have them around as those big ‘cudas sure do tear up a lot of gear! We were mostly fishing with sardines. Some of the other boats were doing well casting bigger surface irons such as two of my favorites, the Tady 45 and the Salas 7X.

Barracuda love those slow swinging hips at a steady even pace and those two jigs can deliver a “Cadillac walk” that drives ‘em crazy. Fished on a longer rod like a Calstar 800 ML with 30-pound Berkley BigGame loaded on a Shimano Torium 20, you’ll have a lot of fun and catch some ‘cudas.

When we were done, we kicked it up and ran over to Catalina, met one of our good friends and got all tanked up with squid. I ran around to check out some spots and later we put our anglers right were they needed to be for some shots at both a big yellow and a nice sea bass. But the Friday the 13th gremlins stole the show at the gaff — twice — as well as stirring up some issues in the engine room that had me stumped for a while. Those bastards!

But we prevailed, and after conditions changed, we headed for deeper water to check the cod grounds and they were biting. The guys were rigged with dropper-loop setups using 6 to 8 ounces of lead and live squid for bait. I had a feeling we would see some quality action and we did!

We made several drifts starting in water a little more than 40 fathoms deep for a mix of nice groupers and beautiful reds.

“We capped off the bottom action by landing the biggest red I’ve ever caught or seen.”

We should have put it on a scale for an official weight but a guesstimate put it about 15 pounds. At deep color it looked like a cowcod, and I was sure surprised to see it wasn’t.

We scored enough fish in the bag for some great fish dinners but it was getting late, the breeze was picking up and the bite was pretty much over anyway. We hit a few more spots just because it’s just not in my makeup to ever quit early, plus we had to chum out the rest of the bait. But with no signal and the clock ticking, it was time to get out the cleaning board and get rolling towards home. Till next time, good luck and good fishing.