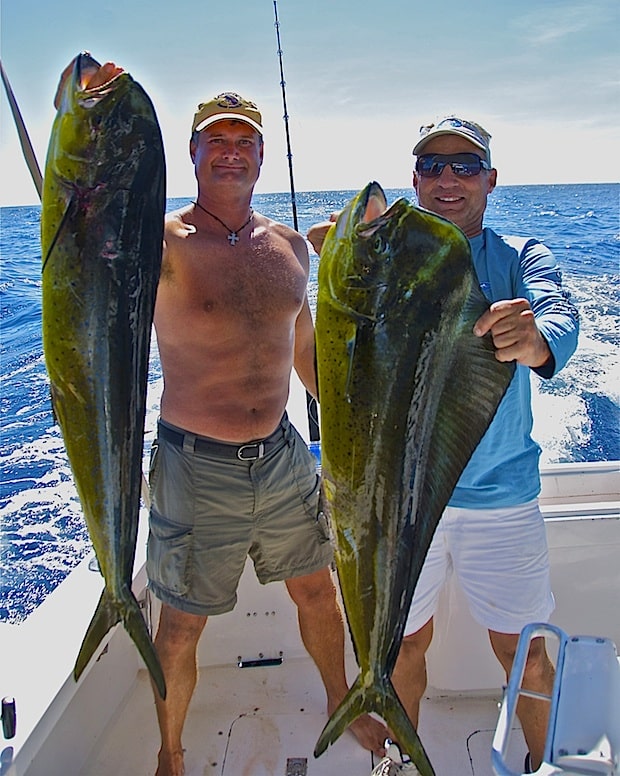 At the 2011 Bisbee Black and Blue Marlin Tournament in Cabo San Lucas, Mexico, Tournament Director Wayne Bisbee introduced me to Michael O’Neal and his wife Summer whose Reel Life Adventures (RLA) program had been named the featured charity for that year’s event.

Wayne has served on the RLA’s Advisory Board along with an impressive list of the sportfishing elite for the past several years and he had offered to host a silent auction on behalf of the group to raise some money for their work.

“The O’Neal’s have found a way to harness the enthusiasm of anglers, allowing them to combine a fishing adventure in a remote area with the opportunity to assist locals in a meaningful way,” Bisbee said. “They have developed a program that impacts the communities visited, leaving a lasting effect on residents for generations to come.”

Immediately following the tournament, a team of RLA volunteers joined Michael and Summer who loaded up with supplies to work alongside Mexican Medical Ministries, which has been providing medical support for the area since the 1960s when Baja roads were not much more then poorly marked dirt trails with no bridges over rivers and washes. 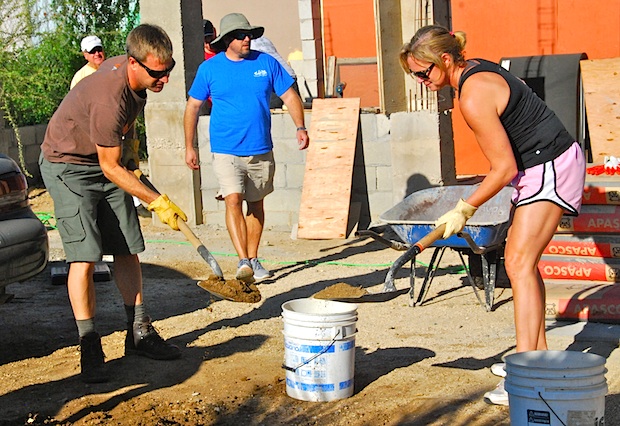 During the week of the tournament, RLA teams split up to conduct a range of charitable work. Some worked on light construction projects while others assisted local medical clinics who work with impoverished families in the outlying barrios of Los Cabos. After their charitable work the RLA volunteers enjoyed a day of sportfishing off Baja’s southern tip.

As luck would have it, I had an opportunity to spend some time with the crew from RLA this year after the Bisbee Black and Blue.

I climbed into a van filled with eager volunteers and piled high with supplies. With another van following closely behind us, we sped through the back streets of Cabo. Craig Libby, a Caravan Coordinator with Mexican Medical Ministries explained that we would be stopping by Dr. Avila’s Medical Clinic that had sponsored the volunteer work of the ministries for more than 20 years. 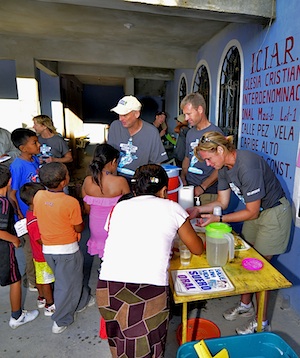 On the drive my fellow team members introduced themselves and eagerly shared their week’s achievements. Some had been laboring to build steps and make other preparations to add a second floor room to the clinic among other construction tasks.

“We worked on special patient’s rooms at Dr. Avila’s Medical Clinic as well as building a special room for women who were either pregnant or perhaps abused and may need refuge,” one team member excitedly told me.

After a brief tour of the facility and loading more supplies, our caravan weaved its way through the back-street traffic as we headed across town to a small community with a distant view of Cape Rocks.

The eight volunteers and I arrived at a local church with a physician who donates his time to help those in need. Upon arrival, everyone pitched in unloading box after box of supplies for the 10-station Children’s Medical Fair.

While some volunteers and team members set to the task of setting up the individual stations, others canvassed the community to spread the news of this rare opportunity for free healthcare. As local families arrived, the doctor conducted health screenings for the community, which typically cannot afford such care. Local residents were also fitted with free eyeglasses, and children were taught about sanitation while they enjoyed the various crafts and educational games the volunteers had set up. 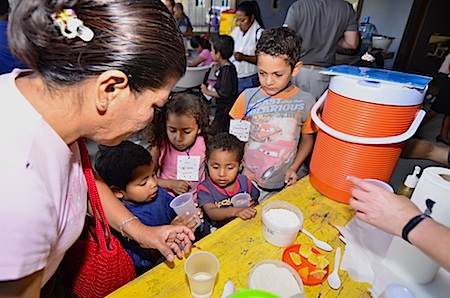 A few families began to arrive at the brightly colored, though unfinished church. They tentatively entered the gate and were warmly welcomed by volunteers at the registration table. As the late afternoon sunlight faded into dusk, the trickle of families continued to swell, causing a backup at the narrow entrance to the church’s courtyard.

After a brief prayer by the minister, the pace quickened. Stations filled as children of all ages crowded around them. Gleefully the youngsters jumped on a bathroom scale to have their weight recorded and their height measured. Other stations offered games with health themes, while others offered simple recipes to recognize and combat dehydration, instructions on how to wash hands, how to deal with diarrhea with a simple homemade remedy using citrus, sugar, salt and purified water. Hand-knitted caps were handed out to the participants upon completion.

Meanwhile, adults gathered inside the church where Dr. Avila conducted health screenings. The smiles of those fitted with glasses reflected their joy of having their sight suddenly restored. It was well after dark when the crowd diminished, the boxes repacked and returned to the vans. 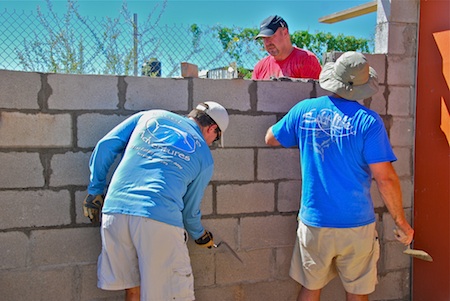 Later, O’Neal explained that Mexican Medical Ministries, Reel Life Adventure’s field partner in Cabo, has been successful in its efforts to assist orphans and impoverished families. RLA was instrumental in raising funds for the Gabriel House, an orphanage for disabled children operating in northern Baja. This came in addition to providing medical supplies for several large health fairs in various impoverished communities throughout Baja earlier this year. Enough funds were raised from the silent auction during Bisbee’s tournaments to fund an addition for the clinic as well as add the second story.

Later on the team was joined by marine artist and RLA advisor David Wirth on a visit to Casa Hogar, a local boys orphanage where the volunteers spent time building relationships, playing soccer and sharing valuable biblical life truths with the children.

Earlier in the month Wayne Bisbee had announced that his family would be donating proceeds of their popular Los Cabos Offshore Tournament on an annual basis to help Reel Life Adventures’ work with these Baja charities.

On the final day of the Reel Life Adventure trip, the team hooked up with Tracy and Marco Ehrenberg’s Pisces Sport Fishing Fleet and Capt. Tony Berkowitz to enjoy some incredible offshore fishing as a reward for their hard work. The group experienced the truly amazing fishery of Cabo, landing several yellowfin tuna, a nice catch of large dorado and a sailfish. The tuna and dorado were given to local families who served alongside the team throughout the week. 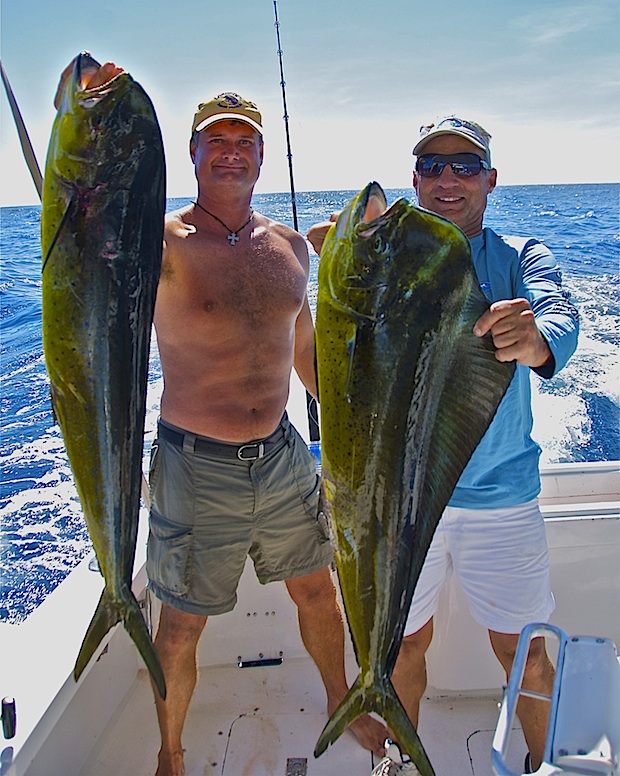 Reel Life team member Reynolds Whatley stayed an extra day and enjoyed some fly-fishing with one of Baja on the Fly’s guides, and had a blast catching yellowfin and dorado on his fly rod.

Reel Life Adventures is a unique charity that was founded more than four years ago to combine sportfishing trips with community service, making a real difference in the lives of those in extreme need in far-flung destinations around the world. The RLA team raises funds necessary to facilitate sustainable assistance programs. Each year they plan a trip to Cabo San Lucas to experience the incredible, hands-on experience of helping the impoverished and also enjoy the area’s legendary fishing. Their work, accomplished through international field partners, causes cycles to be broken and future generations impacted.

The RLA motto sums up their mission very well: “Let Your Adventure Outlive You!”

To get involved with Reel Life Adventures and see photos from their various trips, visit www.reellifeadventures.org.

For more information on the Bisbee Black and Blue, visit www.bisbees.com.

Reel Life Adventures Board of Advisors