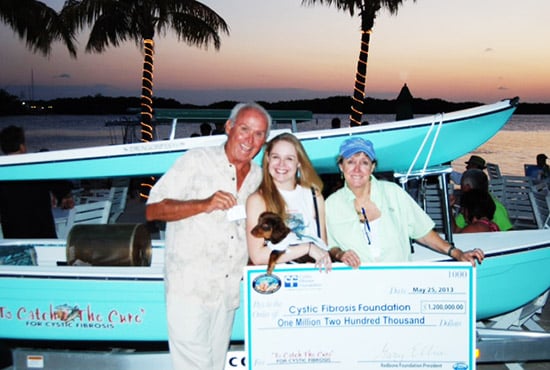 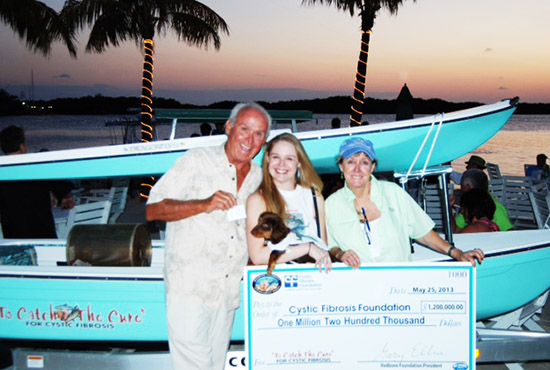 The three events, dates, locations and fish species include:

The tournaments have made a huge impact for CF research. Recently and for the eighth year in a row, the Redbone presented a check for over $1 million to the CF Foundation. “Among the Keys trilogy and 25 other Redbone fishing events across the U.S. and internationally,” said Redbone founder Capt. Gary Ellis, “$1.2 million was raised from last year’s tournaments bringing awareness to the genetic disease and to our great Keys spirit.

The Redbone (REDfish and BONEfish) began as a small local Keys tournament to help CF patients like Gary and Susan Ellises young daughter Nicole. The late Baseball Hall of Fame slugger Ted Williams, an Islamorada resident, inspired the Ellises and helped to attract his celebrity friends. Through the efforts of guides, anglers, sponsors and volunteers they raised $16,000 at that first event. It soon grew into a series of three fall tournaments in the Keys.

Today, under the guidance of the Ellises, the Redbone name has grown into 28 catch-and-release formatted competitions for a variety of local fish species. Anglers fish as a team or with a celebrity and are professionally guided within four distinct fishing series;

• and the [email protected] events in three countries; the U.S., Costa Rica and Mexico.

“CF is a horrible genetic disease causing abnormally thick, sticky mucus that clogs the lungs and can lead to life-threatening lung infections,” said Susan Ellis. “When we started the Redbone the life expectancy of CF patients was the early teens. Researchers have performed remarkable strides in gene research and CF patients are now living into their mid 30’s.

Though researchers are close, there’s still no cure, and the work is not complete until that cure is found.” For more info please visit www.redbone.org or call the Redbone office at 305-664-2002.