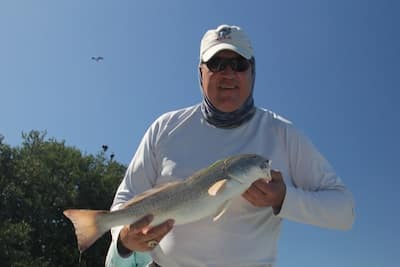 Fishing with Capt. Dave Denkert of Key Largo, Florida, Davis released 18 redfish and two bonefish during the two-day contest, which is a fundraiser for cystic fibrosis treatment and research.

Davis lost his daughter two years ago to cancer at the age of 3-1/2, and he said helping raise funds for cystic fibrosis research, as well as children’s pediatric hospitals, honors her memory. His infant son, now 5-1/2 months old, accompanies him to fishing tournaments as his daughter did.

Davis caught 16 of the redfish on artificial lures and the remaining redfish and two bonefish on bait.

“It’s all about the guide,” said the 10-year Redbone veteran. “The strategy was to focus on fishing one species each day, and it paid off.”

Davis’ teammate, Miami resident Ross Reeder, added another 18 redfish and one bonefish to the tally, earning the duo the team grand championship title. Reeder’s 13 redfish on artificial and five on bait, with his single bonefish on bait, earned him runner-up grand champion honors as well.

The team fished for redfish in the Florida Keys backcountry Saturday, then headed oceanside for bonefish on Sunday.

The top female angler was Sandie Bishop of Aspen, Colorado. She caught one redfish and one bonefish, each on fly, to earn the tournament’s fly division title. Bishop was guided by Capt. Tim Klein of Islamorada.

The event’s celebrity grand champion was Mark Cooper of Aurora, Colorado, formerly a National Football League player with the Denver Broncos and Tampa Bay Buccaneers. Fishing with Mike Hutchinson of Miami, Cooper released six redfish — five on bait and one on artificial.

Mo Smith of Memphis, Tennessee, won the 2011 Redbone Trilogy award, amassing the most points of any angler who competed in each of three Keys-based tournaments, including the Robert James Sales S.L.A.M., Baybone and Redbone.

A field of 60 anglers on 30 boats released 182 redfish and 11 bonefish during the two-day Redbone tournament.

Since Redbone began in 1988, more than $15 million has been raised to fund medical research, according to founder Gary Ellis.