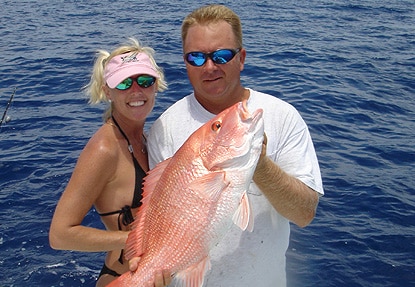 Late Monday, the Louisiana Department of Wildlife and Fisheries (LDWF) and its Commission, and the Texas Parks and Wildlife Department (TPWD) joined together to file a lawsuit in United States District Court in Brownsville, Texas challenging an emergency regulation enacted by the federal National Marine Fisheries Service (NMFS) that, if left in place, would allow the NMFS regional administrator to significantly reduce the recreational red snapper season in federal waters off the coasts of Louisiana and Texas.

“The Louisiana Wildlife and Fisheries Commission, on behalf of recreational fishermen and those whose livelihood depends on reasonable access to red snapper stocks, has taken this action to send the message to NMFS that a nine-day season for Louisiana landings is totally unreasonable and unacceptable,” said Ronald “Ronny” Graham, LWFC chairman.

“While we would prefer a cooperative regional management approach and are still hopeful that we can reach such a resolution, TPWD has a responsibility to take legal action to protect our state’s authority to manage the red snapper fishery within Texas waters,” said T. Dan Friedkin of Houston, Texas Parks and Wildlife Commission chairman. “We have heard loudly and clearly from our anglers and other stakeholders that they expect nothing less from us.”

On Feb. 8, over the strong objections of state agency representatives from Louisiana, Texas, and Florida, the Gulf of Mexico Fishery Management Council (Council) voted to implement an emergency rule that could shorten the recreational red snapper fishing season in federal waters off the Texas coast to as few as 12 days and to nine days off the Louisiana coast, down from a projected 22-day season.

In 2012, the snapper season in federal waters throughout the Gulf was 46 days. In contrast, because snapper stocks are doing well and growing in the Gulf, snapper fishing is allowed 365 days a year in Texas state waters and 88 days in Louisiana state waters.

Just weeks later, on April 18, the Gulf council voted 8 to 7 to overturn the emergency rule, in effect reversing the Feb. 8 vote. Louisiana and Texas representatives said the lawsuit was an added measure of enforceability should NMFS not act on the latest council motion prior to the start of red snapper season June 1. The federal court has been asked to expedite its consideration of the case so that a decision is reached before June 1.

As published in the federal register on March 25, the emergency rule would authorize the National Marine Fisheries Service southeast regional administrator to reduce the red snapper season in federal exclusive economic zone (EEZ) waters off Louisiana and Texas. The federal EEZ extends 200 miles from the coastline and has an inner boundary that is coterminous with each state’s territorial boundary. Territorial waters off Texas extend nine miles from the state’s coast.

Louisiana’s state territorial waters have traditionally been three miles, but in June 2012, the LWFC declared the gulfward boundary for Louisiana to be nine miles for the purposes of fisheries management, implementing the will of the Louisiana Legislature as expressed in Act 336 of 2011. The action taken by the LWFC to extend the state territorial boundary has not been recognized by Congress nor has it been adjudicated in court. The rule affects Florida as well, since all three states have refused to shorten snapper seasons in state waters to mirror seasons set by NMFS for federal waters.

“I am hopeful that NMFS will follow the Gulf Council and overturn the emergency rule that arbitrarily reduces the red snapper season in Louisiana’s territorial waters to no more than nine days,” said Louisiana Attorney General Buddy Caldwell. “However, this lawsuit is a necessary step to protect the State’s ability to set reasonable fishing regulations for in-state waters for the benefit of Louisiana’s residents and anglers.”

The joint lawsuit alleges that there is no emergency to justify such a rule. The two states also allege that the emergency rule violates the federal policy of cooperative federalism by improperly attempting to regulate the red snapper season in state waters.

Although LDWF and TPWD are continuing to work with NMFS and the other Gulf states on a solution, the short deadline for challenging the emergency regulation required filing the lawsuit to preserve the states’ ability to address the issue in a timely and effective manner.

The Louisiana and Texas agencies maintain that while a proposed shortened season will have no apparent conservation benefit, it would definitely have an economic impact. For Louisiana, reducing a 45-day season to a nine-day season could result in an estimated decline in economic value of approximately $8 million to recreational anglers in that state. TPWD estimates that the originally projected 27-day season would generate at least $28 million from recreational fishermen in Texas, while a 12-day season would cut that figure by at least $16 million in lost retail sales in Texas.