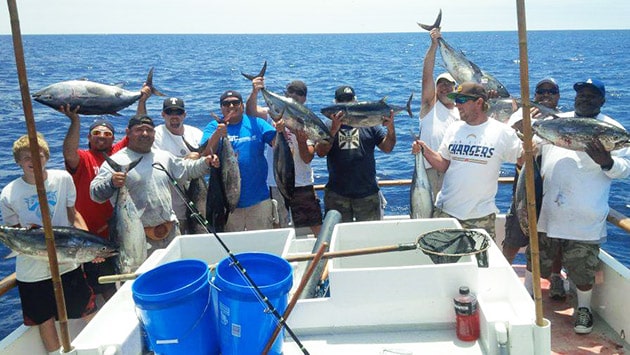 With fish spread from Long Beach to well below the Mexican border, the offshore season is in full swing and the fishing is the best it’s been in a very long time. There was some wind this week, but the forecast for the weekend is stellar and the fish should be biting. I have to warn you though. The good weather coupled with biting fish is going to make for crowded sport boats and lots and lots of private boat traffic. So, before I get to what’s biting in Southern California, I’d like to take a moment to offer a couple of suggestions that will make for a better weekend of fishing for everyone. Let’s start with sport boat fishermen. You need to bring tackle that is appropriate for the size of the fish you will be catching and not be afraid to use it properly. Last night I spoke with Captain Aaron Graham who has been running offshore trips on the Native Sun out of 22nd Street Landing. He reported that on his last trip the boat lost over 40 yellowtail due to passengers using the wrong gear. The wrong gear in this case is a bass rod.

“Please leave your bass rods at home if you’re going on an offshore trip.”

I understand that you’re using heavy line, but just because you have 50-pound spectra doesn’t mean that the rod and reel you’re using it on is rated for that.” Along the same lines, anglers getting on trips that will be fishing in areas where the bigger bluefin have been caught, should definitely always fish with the heaviest line that the fish will bite. There have been a lot of stories about guys hooking 100-pound class fish on the wrong gear and losing them after an hour or two. Not only is fighting a fish for two hours a pain in the lower back, it also steals valuable fishing time away from the rest of the passengers who often sit and wait in an area that’s not biting while “that guy” spends too much time not landing a fish. If you’re not sure of what to bring on your trip, call the landing and ask what they recommend.

Now for the private boaters fishing this weekend (of which I’ll be one). There are some very simple things that you can do to greatly increase the quality of your fishing day. First off, stay away from the sport boats. I understand that when you’re having a tough day it can be tempting to pull up next to a sport boat that’s bent and try to get a couple of stragglers out of their chum line. But before you do that, ask yourself how you would feel if you were on the sport boat and a private boater drove through your chum and shut off the bite.

Common courtesy is often forgotten on the water, but that doesn’t mean that we all need to act like savages.

Find your own fish. That may sound overly simple, but it’s the secret to catching a bunch instead of dumpster diving for scraps. I hear a lot of reports each week and none of the good ones ever start out with, “I saw thirteen boats on this patty so I pulled up in the middle of them and…”. The reality is that all of the private boaters who are getting good scores are driving away from the gangbang patties and finding their own. If you’ve done your homework and have checked the SST and Chlorophyll charts you should be able to make an educated guess as to where to go if the spot you planned to fish is crowded. Okay, enough of the advice. Let’s take a look at what’s happening offshore. Starting to the north, 3/4-day boats out of San Pedro through Dana Point are catching a bunch of yellowtail along with a few tuna and dorado on the local banks. The yellows and dorado are coming off kelp beds and the tuna are mostly coming on the troll. My advice for sport boat fishermen would be to look for the boat with the lightest passenger load or try and get on a limited load trip. Private boaters can draw an imaginary line from the east end of Catalina to Pukey Point at the Coronados and have a shot at catching fish anywhere along that expanse. The overnight boats out of LA and San Diego landings have been fishing outside of San Clemente Island. This is the area where the bigger bluefin have been caught during the last week. This area was also the heaviest hit by the wind we had midweek, but should rebound by the weekend. A lot of the fish are being caught during long morning drifts. The Thunderbird out of Davey’s Locker had a four-hour plunker bite the other morning that resulted in over sixty mixed tuna. Remember, if you’re heading on one of these trips you’ll want to fish the heavier gear.

Down off San Diego, there have been some bigger bluefin caught by boats running 3/4-day trips. The San Diego out of Seaforth Landing has been getting a handful now and then to go with the yellowfin and yellowtail they’ve been catching. Smaller charter boats like the Vendetta out of H&M Landing and Seasons Sportfishing out of Dana Landing have been getting good scores on the bigger bluefin. Finally, boats fishing the Coronado Islands have been hammering the yellowtail in recent days. The Malihini out of H&M Landing has been getting limits almost every trip. So, if you want to catch yellowtail you could probably avoid some of the offshore crowds by heading to the islands.